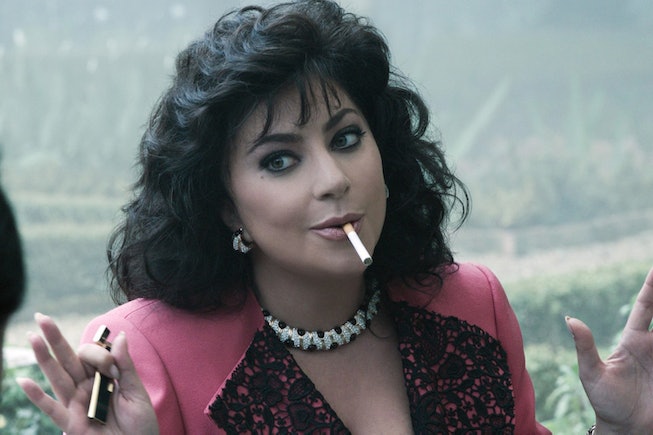 Every week, it seems like we’re being treated to some new juicy nugget regarding the intensive prep Lady Gaga put into playing Patrizia Reggiani, the infamous wife of Maurizio Gucci, in House of Gucci. This week, it’s about how she had an on-set psychiatric nurse to support her in her “extreme” role.

“I had a psychiatric nurse with me towards the end of filming,” Gaga told Variety, explaining, “I sort of felt like I had to. I felt that it was safer for me.” She went on to say that she wasn’t sharing that to “glorify” her commitment to acting, but talked about her sometimes complicated “romantic relationship with suffering for your art.”

“I don’t think that any actor should push themselves to that limit,” she said. “And I ask myself all the time why I do that. I’ve done some pretty extreme art pieces throughout my career — the things I’ve put my body through, my mind. It’s like a walnut of sadness in my stomach as I say this to you. I don’t know why I’m like that. I think that the best answer I could give you is I have a sort of romantic relationship with suffering for your art that I developed as a young girl, and it just sometimes goes too far. And when it does go too far, it can be hard to reel it in on your own.”

Gaga certainly wants to come off as the Very Serious Actor she is — but she also knows how to drop golden nuggets to keep the press going for her film weeks after it was released. Either way, we live for the increasingly bizarre details of the lengths the superstar went to pull off the role of Patrizia.

In past weeks, she’s talked about how she went full method acting for her role, opting to live her life and speak in an Italian accent for nine months straight. She also recently shared that she wrote an 80-page biography of Patrizia’s life — what a little nerd!

But it’s worked: Despite mixed reviews from critics, Gaga was nominated for a Golden Globe for Best Actress for the film. And earlier this month, she was named best actress at the New York Film Critics Circle Awards.

In the Variety interview, Gaga also teased what she might be working on next, saying she’d like to make it to Broadway, which would certainly catapult her to EGOT territory.