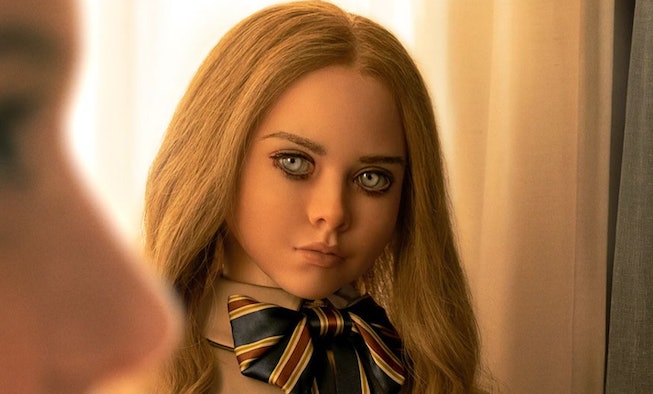 There’s nothing yet that’s piqued my attention for 2023 media goes as much as M3GAN, a horror film featuring maybe the scariest doll-child-robot we’ve ever seen, the trailer for which was released today. Starring Alison Williams and bringing together creepy doll-like children and artificial intelligence, it’s a horror film for the technological advancement age, taking cues from the ’80s horror Child’s Play and 2014’s sci-fi thriller Ex Machina.

According to the absolutely loony trailer, the film follows Gemma (Alison Williams), who has to care for her orphaned niece Cady (Violet McGraw). Cady is pretty creepy herself (conjuring Isabella Fuhrman in Orphan), but to cheer her up, Gemma introduces her to M3GAN, a robot she designed to "be a child's greatest companion and a parent's greatest ally,” whose job it is to "protect Cady from harm.” A creepy doll-like artificially intelligent being from the depths of the uncanny valley meant to solve all our emotional problems? What could go wrong? While she’s programmed to be able to “turn off,” she instead recalibrates, becoming dangerously protective, doing everything from sprinting on all fours in one terrifying shot to push an annoying boy in front of an oncoming truck to wielding a sword to protect Cady.

The mesmerizing trailer is set to Taylor Swift’s “It’s Nice To Have a Friend,” the already robotic chorus giving way to a new eeriness when paired with clips of M3GAN, wearing a preppy tie trench coat dress, white tights, and Mary Janes dancing with the crazed staccato abandon of a Sia music video. In short, this movie, which has the log line “Friendship has evolved,” is going to be petrifying, but also deliciously laughable, caressing the emotions of being human like only a ridiculous horror film can.

The film has a storied horror pedigree; it’s produced by James Wan, the writer and director of Insidious and The Conjuring, along with The Black Phone producers, with a script by Akela Cooper, who wrote Malignant. Williams is also executive-producing the film, which makes me have a deeper appreciation for her and her quest to build a post-Get Out horror oeuvre.