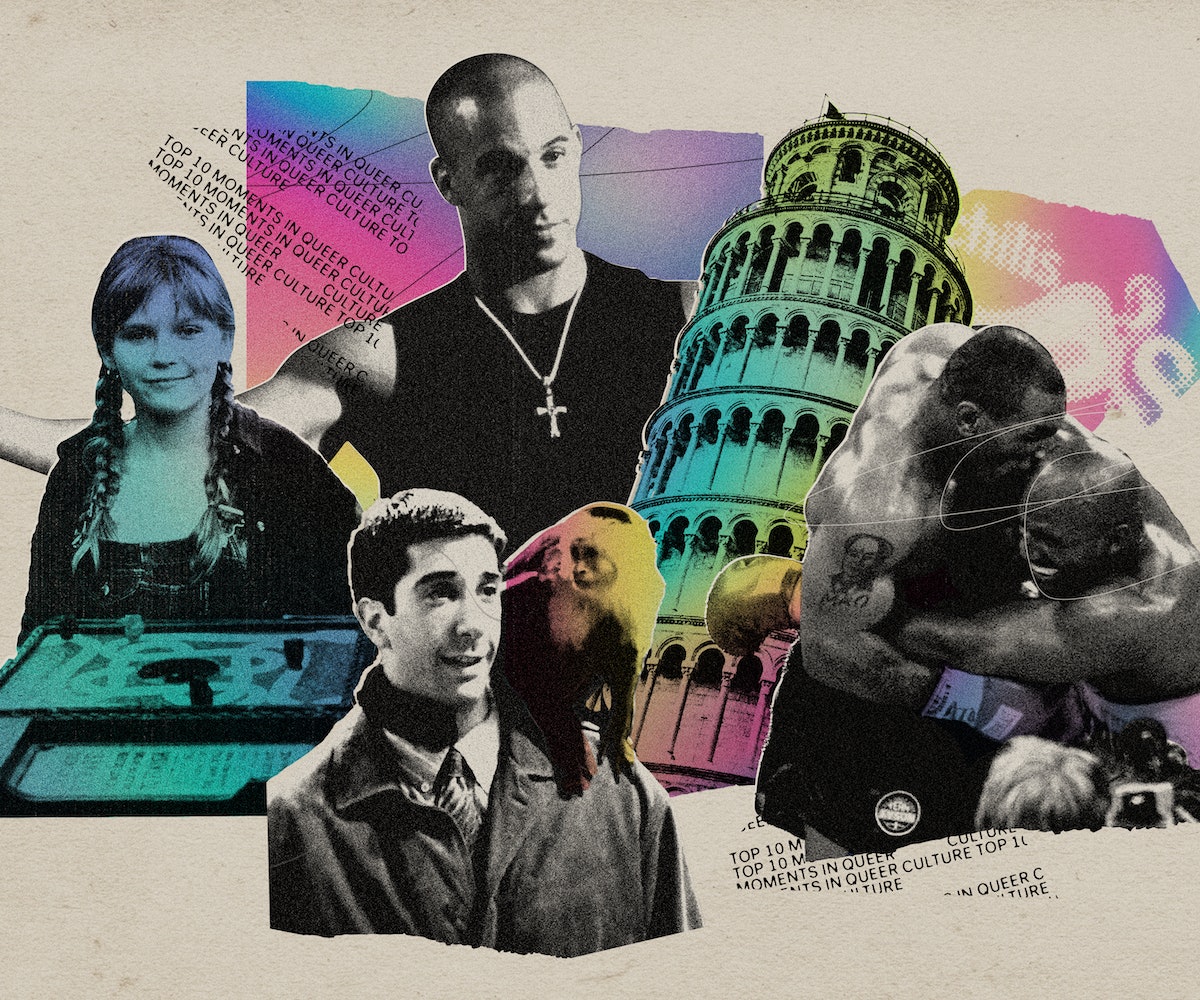 Each week on Las Culturistas, hosts Bowen Yang and Matt Rogers break down that week’s biggest moments in culture. In honor of Pride Month, NYLON asked the podcast hosts to come up with their list of the Top 10 moments in LGBTQ+ history. From Chili’s (the restaurant) to the film Jumanji (the original ’90s version), they did not hold back on the assignment. Here, Las Culturistas’ Top 10 moments in queer culture.

Bowen Yang: So you would think that the baby boom was a very straight moment in culture because it centers around and follows breeders and breeding culture. But you know, in some sense, the baby boom produced the most queer people out of any moment in history. Ten or 11% of those babies in the baby boom ended up being gay or queers or something under the umbrella.

Matt Rogers: Yeah, the baby boom was sort of like the Big Bang of queer people because those children born in the baby boom went on to Stan Cyndi Lauper. And if the baby boom had not happened, maybe Cindy Lauper would never have been Stanned. Also, Madonna is a baby boomer herself, and she is of course a queer icon, maybe even the queer icon.

9. Dom Toretto in the Fast & Furious franchise (as played by Vin Diesel)

Rogers: You might think of Dom Toretto — and you might think of a lot of things on this list — as being part of straight culture. But the thing about Dom Toretto is that he is actually first and foremost a tank top model. You'll notice that those tank tops are being worn by him. Those tank tops are never wearing Vin Diesel; he's always presenting, and it's something to look up to in the queer community. Also, his best friend and girlfriend is Michelle Rodriguez, which is one of the queerest things you can do.

Yang: And he would stare longingly at the late Paul Walker, which is also very gay.

Rogers: Any queer person knows that staring at Paul Walker for an indeterminate amount of time with varying intensity levels means you're queer.

Rogers: The tension between Robin Williams and a hunter with a mustache... This is very sort of "What happened in the jungle?" We're all really asking why are they so mad at each other? Why is Robin Williams tangling with this daddy type? And literally in the movie, the actor that plays his father is the actor that plays the hunter, so there's something sort of Freudian going on there.

Yang: Hating being gay is gay, and also consistent fonts on your signs is gay.

Rogers: Also long braids is very Lilith Fair. It's very “I'm going to keep my hair out of my face so that I can play my acoustic guitar.”

Yang: There are definitely some bi-conic musical geniuses trapped in the Westboro Baptist Church who would turn out an album like Phoebe Bridgers.

Rogers: The thing is we can't talk about Friends without the classic “will they or won't they” of the show, which was Ross and the monkey. That was a queer relationship that really doesn't get the credit. We also just want to say that the Rachel [haircut] employed millions of gay hairstylists who otherwise would not have been employed. I mean, think about the dollars that they racked up in their bank accounts because they were giving women the Rachel. I mean, these gay men were heroes. They were on their feet on the front lines doing God's work and making all these women look exactly the same. They were at war.

Yang: And then of course, “Smelly Cat” is a lesbian dog whistle about a stinky vagina.

Rogers: The Friends reunion is not on this list. We do not accept or see it or understand why it needed to happen.

Yang: Having Lady Gaga and Malala be in the same nostalgic program is very straight and not queer.

Rogers: And you might even say, "I don't think so, honey."

Rogers: A. Rod is a queer icon.

Rogers: You have to Stan to date. And that's actually a huge part of dating that people don't really get. In order to date someone, you are basically Stanning.

Yang: Dating is the ultimate way of saying, “We Stan."

Rogers: Also, sitting next to Bethenny Frankel and judging people is queer, and he does that on Shark Tank.

Yang: Chili's is the Puerto Vallarta of chain restaurants in this country. One of the gayest cities in the world — Chili's really embodies the spirit, the gorgeous sexual energy of Puerto Vallarta.

Rogers: Midday margaritas are very queer. Also, it's famously where many drama club pasta parties would be held. The thing about Chili's is it's a community. I can tell you all of my straight dates in high school happened at Applebee's, and me and my ex-girlfriend Michelle, we used to go on dates to Applebee's on Sundays at noon and I would fall asleep all the time at them. So I can tell you it's not a live, queer energy. It's a very sleepy, straight energy.

Rogers: So this is when Mike Tyson bit the ear of Evander Holyfield. The ear — and this is just a sort of biology lesson for everyone reading — the ear is a famous erogenous zone. During his fight with Evander Holyfield, Mike Tyson not only licked the ear, he bit it right off. He went over to that man's ear and bit it clean off. And that is a moment in queer culture that we will never forget.

Yang: I have nothing to add.

Yang: No. 2 is Mark Zuckerberg starting Facebook in a house with other men. Basically that's what every Fire Island house is, and politically it's how every Fire Island house is organized. You have one person who basically wants to organize everything and change the world, and has probably dropped out of college. It's very gay to be eating takeout with a group full of men who do the same job that you. Now he surfs and then puts like 10 layers of sunscreen on his face.

1. The Leaning Tower of Pisa

Rogers: It doesn't stand straight up. It bravely has tilted to the side and it has that “will they or won't they,” it has a tension, it has a drama. When you see it, you're like, “Oh my God, there is no way that doesn't fall over.” And the fact that this landmark is constantly providing dramatic tension, any queer could learn from this.

Yang: And just like any queer icon, if you were to see, let's say Freddie Mercury, walking down the street, and I was a Midwest girl, I would want to take a picture with Freddie. If I am a Midwest girl in Pisa and I'm at the Leaning Tower, I'm taking a damn picture pretending to hold it up.

Rogers: It's trolling all the straight people that do that because it makes them look so stupid, you know what I mean? Meanwhile, here's the thing: Straight people need to get it together and go take the photo at the landmark that was made for them, which is, say it with me, Machu Picchu.

Yang: Leaning Tower is for the shes, the gays, the theys.

Yang: Because if you rearrange the letters of the Leaning Tower of Pisa you get: “Haha, you stupid Queens, I'm trolling y'all; it's for the shes, gays, and theys only that I stand.”

Rogers: Don't try to unscramble it. Just trust us.

Las Culturistas with Matt Rogers and Bowen Yang is part of Will Ferrell’s and iHeartMedia’s Big Money Players podcast network. Listen on iHeartRadio and everywhere podcasts are heard.