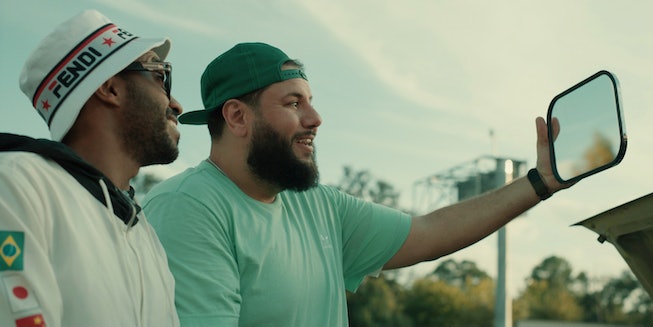 It’s been two years since the second season of Ramy — the sharp coming of age comedy about a young Muslim guy navigating spirituality and dating in suburban New Jersey. Now, Ramy Yusef and Mohammed Amer are bringing us Mo, an A24-backed Netflix comedy about a Palestinian refugee living in Houston, Texas straddling two cultures: one in which it’s impolite not to remove your shoes and one that thinks Palestine refers to the city in Texas.

Amer, who played Ramy’s diner-owning cousin Mo in Ramy, stars in the series as Mo, who calls himself a “refugee free agent,” for not having citizenship in Palestine nor the United States. The trailer shows Mo selling merch to make ends meet while on the long path to U.S. citizenship in a fish out of water tale that feels as heartwarming as it does funny. In one scene, a grocery store worker offers him a free sample of chocolate hummus. “You say chocolate hummus? You just insulted my grandmother,” he says. “Lo siento,” she replies with much effort. “I did not know that hummus was Mexican.”

The series also stars Teresa Ruiz (Narcos) as Mo’s girlfriend Maria, who tries to explain Catholicism to him (good luck with that), along with with Farah Bsieso as Mo’s mother, Yusra Najjar, who is dismayed at a Polish citizenship lawyer who doesn’t remove her shoes upon entering the home. Omar Elba plays Sameer Najjar, Mo’s socially awkward older brother and Tobe Nwigwe plays Nick, his oldest and most loyal friend.

“I started pitching it to all my friends. I said, ‘Guys, I got this amazing idea!’ I’d start acting out the first two minutes of the series for them, this really cool way to tell that story of how we came to the States,” Amer told Esquire Middle East. “All my friends were like, you need to save that. That is amazing. Don’t drop it on a stand up special. You need to put it in a series.” It wasn’t until he was on Ramy that he saw a way for the show to get made.

“I was like, you know what, you’re making a show here with A24, and they want to make more,” Amer says. “I’ve got an idea, why don’t we do this?” The studio, unsurprisingly — given A24 is known for its embrace of off-center stories — bit.

"I'm very, very proud of this project. This is something that I've been wanting to do for years, so it's a beautiful thing that it has all come together in the way that it has," Amer told Entertainment Weekly.