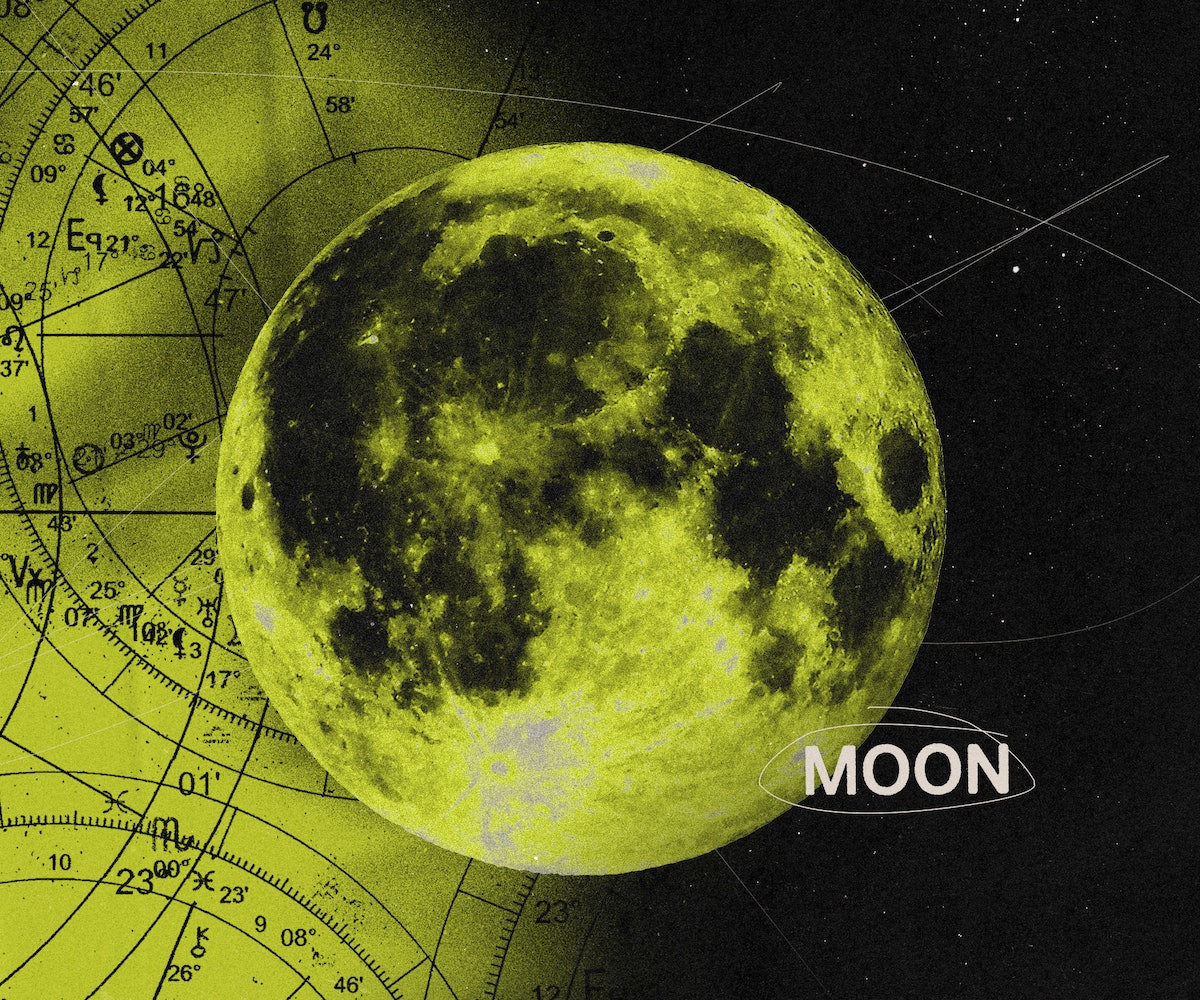 There it goes again, in a new sign seemingly every day, sometimes full and effulgent, or new and barren; eclipsing, reflecting, and leading Cher to Nicholas Cage all over again. “The moon brings the woman to the man, capisce?!” If the sun is the protagonist of your chart, then the moon may be the memoirist: bearing, reflecting and passing down the story of who we are and where we came from. But what does your moon’s placement say about you, and how do its interactions with your other planets elucidate your path? If you aren’t pouring a salt bath on a full moon, have you failed? And how well does Sailor Moon represent her title planet? For insight into Luna, look no further than our guide below.

Astrology works on a geocentric basis, assuming that the planets revolve around Earth, though we know that the sun is the center of our solar system. But the moon, unlike the other nine players, really does orbit us, exponentially speeding up its revolution. Where other planets may take at least a year to cover all twelve signs, the moon cruises through the zodiac at a clip of 27.3 days. A silent, hollow rock, the moon can only reflect the light of the sun in its perpetual chase around our orbit. The moon, therefore, receives and carries, making it a traditionally feminine (though not strictly female) archetype. In his Complete Astrology, Alan Oken describes the moon as “all that is receptive in human nature: the subconscious, the emotions, and the behavioral instincts. The moon is the Soul while the sun is the Spirit.”

Indeed, if the sun takes the stage, it’s the moon who writes the script, and reveals what you need to make it through the show. Naturally, the moon rules Cancer and the first four years of life, that Freudian freakshow when maternal dependence is at its most literal. Cancer is the sign of the mother, the mammary glands, and what we pass down to one another — be it heritage, trauma, talents, or tribal belonging. In many charts, the moon may be your mother or matriarchal figure, its placement exposing the thematic challenges and gifts your relationship brings.

The moon’s locale in your chart informs us of what feeds you, heals you, and gives you a sense of belonging. Born with a Taurus moon in the 7th house of intimate partnerships? Your lover better foot the bill for oysters, champagne, and a romp in the penthouse. To make sense of a Pisces moon in the 12th house of processing and closure, you’ll need a studio, a darkroom or sarcophagus, and a lot of alone time. Regardless of sign or house, the moon’s power and prominence in your chart demands a look inward — at your history and pain — and a devoted effort to meet your needs without judgment.

THE MOON AND OTHER PLANETS

At such a fast clip of revolution, the moon is more often than not interacting with other planets in the cosmos; indeed, ancient astrologers believed that it reflected all the lights in the stars, not just our sun. How the moon interfaces with other planets in your chart will reveal boons, constructive challenges and confrontations connected to your intuition, empathic reality and needs for sustenance. For Cancer risings, these placements are critical, as the moon rules your chart.

Here’s how connections to other planets play out for the moon: through conjunctions (immediate and intense alignment); trines (60 degree, collaborative angle); squares (90 degree challenge from a “backseat driver”) and oppositions (180 degree confrontation, or faceoff). Remember that harsher aspects, like squares and oppositions, often lead to growth, change and metamorphosis; rarely is there such a thing as a “cursed” placement. And, as Oken warns, “a ‘fine’ aspect does not necessarily make a fine person.”

How do your inner and outer lives align? Those with sun/moon conjunctions were born on a new moon, and will powerfully personify their home sign, while struggling to see the world outside of their myopic self-definition. Children of the full moon must reckon with sun/moon oppositions and a divide between where they emerge in the world and what they’re really feeling. Squares force a similar reckoning of social presentation and intimate reality, while trines indicate a peaceful partnership between will and intuition.

What are you saying in the world, and what does it mean to you? When the speaker, fixer and doer of the gods squares or opposes the moon, challenges in saying what you mean, and finding your voice will (hopefully) inspire a practice of authentic self-expression. In conjunction, the moon and Mercury blast open a portal, making you an intuitive voice who may struggle to edit their blunt — if, albeit, true — observations. Trines harmonize desires and actions to work for you.

In your chart, the moon may be Sleeping Beauty, dancing and dreaming from the safety of the woods. Venus, meanwhile, is Cinderella, showing up to the ball, ready to be seen and adored for her beauty and artistry. Any connection between the two high femmes will speak to the ease of visibility when it comes to sharing your gifts with the world. Conjunctions and trines offer social grace and creative clarity. Squares inspire questions of who you’re attracting and what ancient relationship dynamics you’re reenacting. Oppositions, meanwhile, force the abandonment of shallow social scenes in search for deeper artistic and spiritual belonging.

Showdown. How does the most internal, feminine archetype interact with a battling god, hell-bent on asserting ambition, drive, and sexual fire? Oppositions and squares will reveal the ways that a hyperbolic ego may overcompensate for a vulnerable underbelly. It’s the disappointing realization, in therapy, that all your bedroom battles are really about your mother. Trines seek a constructive, active expression of one’s needs and desires, while conjunctions set off eruptions of feeling fast and often, cultivating a healthy awareness of moods and tempers.

Jupiter collects wisdom through experience, streamlining your life history into lessons to share. Any aspect with the moon will further the synthesis of your experiences into something of value to the world. That said, Jupiter expands everything it touches, so conjunctions with the moon can lead to self-aggrandizement or difficulties with limits. Those with oppositions battle with codependency, as they overcome their insecurities by giving too much too soon. Squares question delusions regarding your inner largess, while trines offer a direct path from inspiration to manifestation.

Saturn wants efficiency and results, while the moon craves love and support, consider this a face-off between stern daddy and loving mother — this should end well. One of the harder configurations, which can yield, through laborious reflection, surrender and respect for one’s inner needs. In conjunction, the planets force a reckoning between control and submission. Oppositions reveal the ways that your parents or conditions of hardship have eclipsed your emotions. Squares help the moon thaw out Saturn’s rugged survivalism, and trines help you shape and structure abstract emotional truths.

Peace and stability are blasted to bits when the archetype of change, upheaval and awakening blows through town. Any connection between these two planets will likely reveal a chaotic upbringing, intimacy, or immune system. How has being uprooted forced you to adapt, or expand your worldview? After being ejected from your own suburban fantasy, how do you serve others with little footing in the capitalist mainframe? Uranus-moon aspects will launch you out into the wider world, but can lead to a life of constant running, “pulling a geographic” and never quite belonging.

Are you a visionary of the times, or just stoned out of your mind? Neptune rockets the moon’s intuition to a global scale of interconnected, spiritual unity: Welcome to Brahma unlimited. Any aspect between the planets will light up intuitive gifts, creative channeling and a personal gate to God. But once substances are involved, the scene can swiftly shift from Tree of Life to Trainspotting. Erect emotional levees now, lest you end up like Cate Blanchett at the end of Blue Jasmine.

Oken indicates that when the archetype of the mother descends into the karmic underworld, we’re called to resolve matters of “biological karma.” You may be called to heal your ancestral line or break family traditions, curses or dependencies. It all starts with your feelings, especially those which rise up from the depths to sabotage you. To heal and purify those base emotions, you’ll embark on a journey going back eons, and finally setting you and your bloodline free.

WORKING WITH THE MOON

For tribal priestesses and magicians through the ages, the moon’s monthly cycle has provided the ideal system for marking ritual and intention. Alex Kazemi offers a primer to magic practice in Pop Magick; Starhawk’s The Spiral Dance lays out the tools for connecting with goddess worship; Dmetra George explores the shadow side in Mysteries of the Dark Moon; and Christopher Warnock reveals ancient timing practices in The Secrets of Planetary Magic.

But, for the basics: A new moon aligns Luna with the sun, and kicks off a new cycle. Energy is low, but intention, and possibility, is high. The waxing half moon brims with optimism and constructive power. The full moon lights up Luna with the sun’s exposure, and brings carnal pleasures and creativity to manic release. The waning half moon helps with the comedown. To know which signs this month’s moons are in, remember that new moons always go down in the sign of the season, and full moons light up its opposite. For example, a Cancer season new moon will hit the house of the crab, while the corresponding full moon exposes its inverse sign, Capricorn.

Eclipses bring the sun and moon into perfect alignment on the nodal axis. Eclipses fall on new and full moons, twice a year. With the nodes on the Taurus-Scorpio axis in 2022, eclipse seasons occur in April-May (Taurus season) and October-November (Scorpio season). These are not necessarily the most productive time for manifesting; they’re more like doors into the abyss, hellmouths, or karmic openings. See what comes through; avoid getting sucked in.

The moon rules Monday (moon day), and calls for your own interpretation of Gym, Tan, Laundry: be it rest, household cleaning, or just a general break from emails. Any work involving water, matriarchal and spiritual connection, or simple pleasures goes a long way when connecting to the moon. Tap into ancient femme archetypes who can be as giving as the mother and as wrathful as the oceans: Hecate, Isis, Chandra-Devi, Artemis, Ceres, Persephone, Rhea, Vesta and even the mother Mary. Of course, Avatar: The Last Airbender’s Princess Yue is as literal of an embodiment as any; and Sailor Moon’s Usagi perfectly captures the profound inner power — and constant emotional uncertainty — of her namesake.

When it comes to the so-called “big three,” the moon is indispensable. The sun lights you up for the world, and the ascendant sets your direction. But the moon is who you are, where you come from, and what you need. Submit to her now, one way or another. She rarely stays in the dark for long.