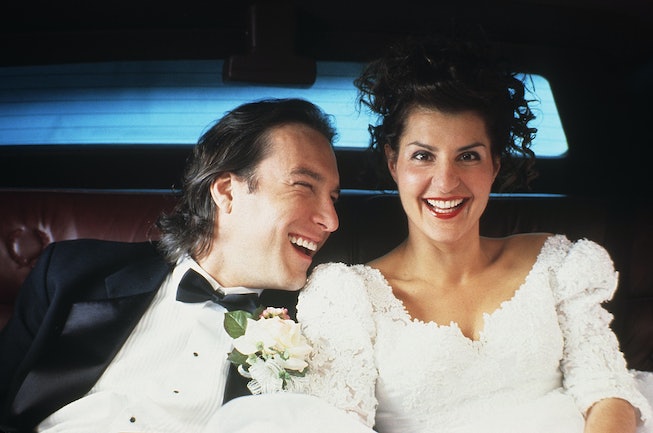 It’s hard to believe it was two decades ago that My Big Fat Greek Wedding premiered. The VHS of big-hearted, deeply funny movie about family, expectations and culture shock certainly played on repeat in my house. Whenever my mom makes a bundt cake, she texts me: “It’s a bundt!” Thanks to the long gap in between the sequel, which came out in 2016, and the original, the story of Toula (Nia Vardalos) and her big, fat Greek family is one that crosses generations.

If you need a little refresh, My Big Fat Greek Wedding followed Toula, an unmarried Greek woman who falls in love with Ian (John Corbett), an American teacher, much to the chagrin of her family. Eventually, they learn to love him, because you can’t not love John Corbett (except when he’s playing Aidan in Sex and the City. Snooze.) Anyway, in My Big Fat Greek Wedding 2, Ian and Toula have a 17-year-old daughter named Paris, and their marriage lacks spark. Meanwhile, Toula’s parents Gus (Michael Constantine) and Maria (Lainie Kazan) discover their marriage certificate was never signed by a priest, and they have a big fat Greek wedding.

It’s not clear yet when the film will release, but here’s everything we know so far about My Big Fat Greek Wedding 3.

Sadly, there will be no Gus in the film

Michael Constantine, best known for his role of Gus Portokalos, Toula’s father, passed away in the summer of 2021. The film will be dedicated to him.

Vardalos, who wrote and starred in My Big Fat Greek Wedding and its sequel, announced she will be directing the third installment in the series, in an Instagram video on Wednesday.

"Thank you so much for the lovely messages [and for] waiting," she said, "We're filming in the beautiful Plaka of Athens.” She then shared the Greek word for "director,” followed by an announcement: “Guess who the director is? It’s me!”

The plot is still under wraps, but it’s not hard to guess

At the end of My Big Fat Greek Wedding 2, we see Paris invite her crush Bennett (Alex Wolff) to prom, which is on the same night as her grandparent’s wedding. The end of the film alludes to the fact that Paris and Bennett — who also has a loud Greek family — may end up together. Considering that the two previous films have ended in weddings, and wedding is in fact, in the title, we’d put money on Paris getting married at the end of the film. Plus, she would be 25 now, not 17, so we’ll see if she and her high school sweetheart are still together.