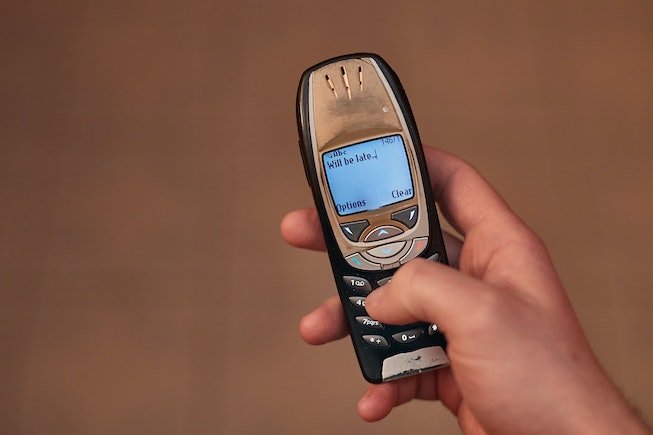 Twenty years after its first release, Nokia is revamping its classic Y2K-era phone just in time to jump on the peak of the 2000s trend cycle, a beautiful, bloated time when Depop is overflowing with overpriced Ed Hardy, grommet belts, and velvet Juicy baguette bags. What we now commonly refer to as the “brick,” the phone requires you to go back to texting like this: “it was gr8 2 c u,” but is virtually indestructible and has a battery life that’s not designed to significantly decrease once a new model is released. (Looking at you, Apple!)

An analog antidote to our iPhone culture, retro phones have been making a comeback for a few years now— as further proven by the Motorola Razr I saw strapped to the belt of a high schooler’s cargo pants in Brooklyn last week. And while it’s disappointing that the new model, which features a not-pixelated screen and an altered design, lacks the Y2K je ne sais quoi of the first, which was discontinued in 2005, it is in many ways a more superior phone than the Androids and iPhones that have taken over the planet.

“The new Nokia 6310 takes the iconic silhouette of the original and brings it up to date with some great new additions such as a large curved screen, improved readability and accessibility,” according to a product description from Nokia. “Plus a host of classic features you know and love: a wireless FM radio, an impressive battery that can go weeks between charges, and let’s not forget the classic Snake.” By weeks without charges, they mean three entire weeks. You might not be able to go on Twitter, but you’d never again need to lug a portable USB charger around either.

“It’s all built in a tough shell, so it can take life’s bumps,” the description continues. No Casetify cases needed here! The phone comes in black, yellow or green and is only available right now for users in the U.K. But if you’re desperate for the true Y2K look, you can still buy the original Nokia model on eBay for about $60.

Most crucially, it will also include the mobile game Snake — hearkening back to a time when a phone unboxing was only as exciting as the free games it came with. Unfortunately, the phone does still have a camera, but at least you can’t upload the pics to Instagram.

NEXT UP
Culture
Jenna Ortega’s Childhood Hobbies Included Animal Autopsies
Culture
Remember When Gossip Girl Made The Quintessential Thanksgiving Episode?
Culture
Aly & AJ's "With Love From" Video Is A Postcard Of Melancholy
Culture
A Third Princess Diaries Film Is In the Works