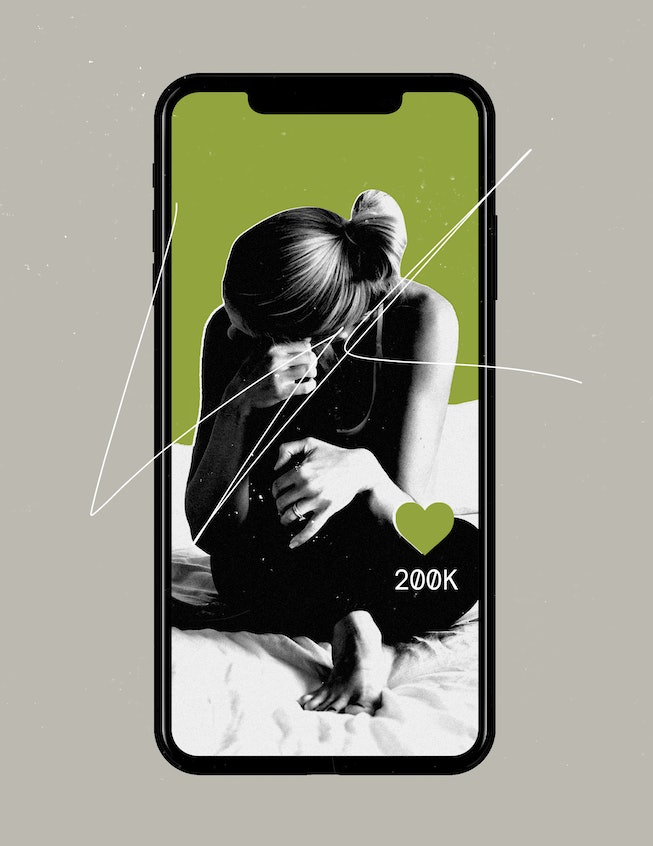 TikTok has a dark side, but unlike its older counterparts Twitter and Instagram, nothing is really taboo. A quick scroll of the Gen Z-dominated social platform will inevitably bring users to dancing teenagers talking openly about school shootings, abusive relationships, and self-harm (just to name a few topics) in the way millennials might talk about brunch. The casual interface of the app — 60 seconds of movement max to looping music — combined with heavy subject matter might come across as glib to some, but for the app’s loyal base, it’s a signal.

Trauma in short-form content is in. Like the way Bottega Veneta or minimalist furniture is appetizing to Instagram, TikToks about the worst of the human experience are a staple. Whether they're explored as a confessional-type video or recreated as POV (point-of-view) role-play, TikTok users are weaving in their own experiences, real or imagined, into their content.

“Gen Z really appreciates discussing the harder issues and discussing them openly and without attaching stigma," Emma Norton, a creator with over 4 million followers on the platform, tells NYLON. "There's a sudden popularity [in trauma TikToks] because people are unapologetically talking about issues that are so important, like mental health, religion, hate crimes, toxic relationships, whatever it is. The power of these POVs is that they can make people who have experienced these things feel less alone.”

Community seems to be the main motivator for creators to keep making these trauma-based videos. Dr. Mariel Buque, a licensed therapist and trauma expert, credits Gen Z as a “generation that has a lot of emotional intuitiveness and more openness about anything related to mental health.” According to Buque, the validation of one’s personal and dark moments can create a rippling effect that ties in with the app’s algorithms.

"If you're reinforcing a behavior, it's likely to happen more," Buque tells NYLON. "People see somebody that has this long caption about their narrative around something that was extremely stressful and the ways in which they overcame it — or just the fact that that has happened — and they're putting it out there and being vulnerable. People flood to those kinds of posts and send messages of affirmation, like, ‘Hey, I'm here. Are you OK?’ It creates this sense of community and sense of support."

"Young people have an openness about their life experiences, especially the bad ones, on TikTok in a way that I just don't think many older people do."

Undoubtedly, it’s this cycle of validation and voyeurism that keeps users so tuned to the app. Taylor Lorenz, an internet culture reporter for The New York Times, notes that narratively, Gen Z has nailed what it means to have control.

"There's this idea that you have to live your life as the main character," Lorenz tells NYLON. "Everything that you went through is part of what makes you, you. Young people have an openness about their life experiences, especially the bad ones, on TikTok in a way that I just don't think many older people do."

Challan Trishann, a writer and creator whose videos have accumulated over 81 million likes, considers her POV videos to be an exercise in taking matters into her own hands. "For me personally, a lot of the stuff that I make — the darker POVs — are not a fully fictional story," Trishann tells NYLON. "It's just stuff that I’m really scared of. I made a kidnapper POV a while ago because I have a really, really huge fear of being kidnapped. So it kind of felt like I was in control of the situation."

Unlike generations before theirs, zoomers have the hardship of coming into their own in uniquely difficult times. Now more than ever, Gen Z has the pressure of climate change, a global pandemic, and the increased likelihood of school shootings on their minds. For creators like Trishann and Norton, those realities are spilling out in their content. Or as Buque says, “They're creating a normalization of narratives that are tough to hear and digest.”

But reinventing the way internet dwellers consume content doesn’t come without its challenges, particularly from older generations who aren’t as familiar with TikTok culture. For Trishann — who spends anywhere from three hours to weeks on her craft — these misunderstandings of trauma videos often come from a place of unfamiliarity and judgment.

"I think a lot of people look at it more as us being weird versus it being like, you know, something on such a different level," Trishann says. "A lot of people look at POVs about trauma and say, ‘Why would you make that into a video?’ But do people ask directors that when they make movies and stuff? No one really says that to them. [TikToks] are just basically low-budget movies."

"It’s become a trend that far superseded anything that I would have imagined happened in reference to trauma," Buque says. "I think people are becoming really comfortable with talking about their narratives, which is a beautiful thing. But then two things can happen: One can trigger another person or one can be further triggered and traumatized because of somebody else's reaction to their story."

Caution taken in stride, it’s clear that trauma for Gen Z is less of clickbait and more of an unprecedented openness to talk about their lives. And according to the teens, there’s no better place for those conversations than TikTok.

“It's very appealing that you can say something in even just 15 seconds and it doesn't have to be a long memoir or presentation or anything. You can really do a lot out of very little,” says Norton.

NEXT UP
Culture
On The List (With Melissa Rich): How To Throw The Ultimate Apartment Party
Culture
Caroline Polachek In KNWLS & More Party Photos You Missed
Culture
Loewe’s Howl's Moving Castle Collection Is An Anime Dream
Culture
6 Shows To Binge Once You've Finished 'The White Lotus'
Style + Culture, delivered straight to your inbox.