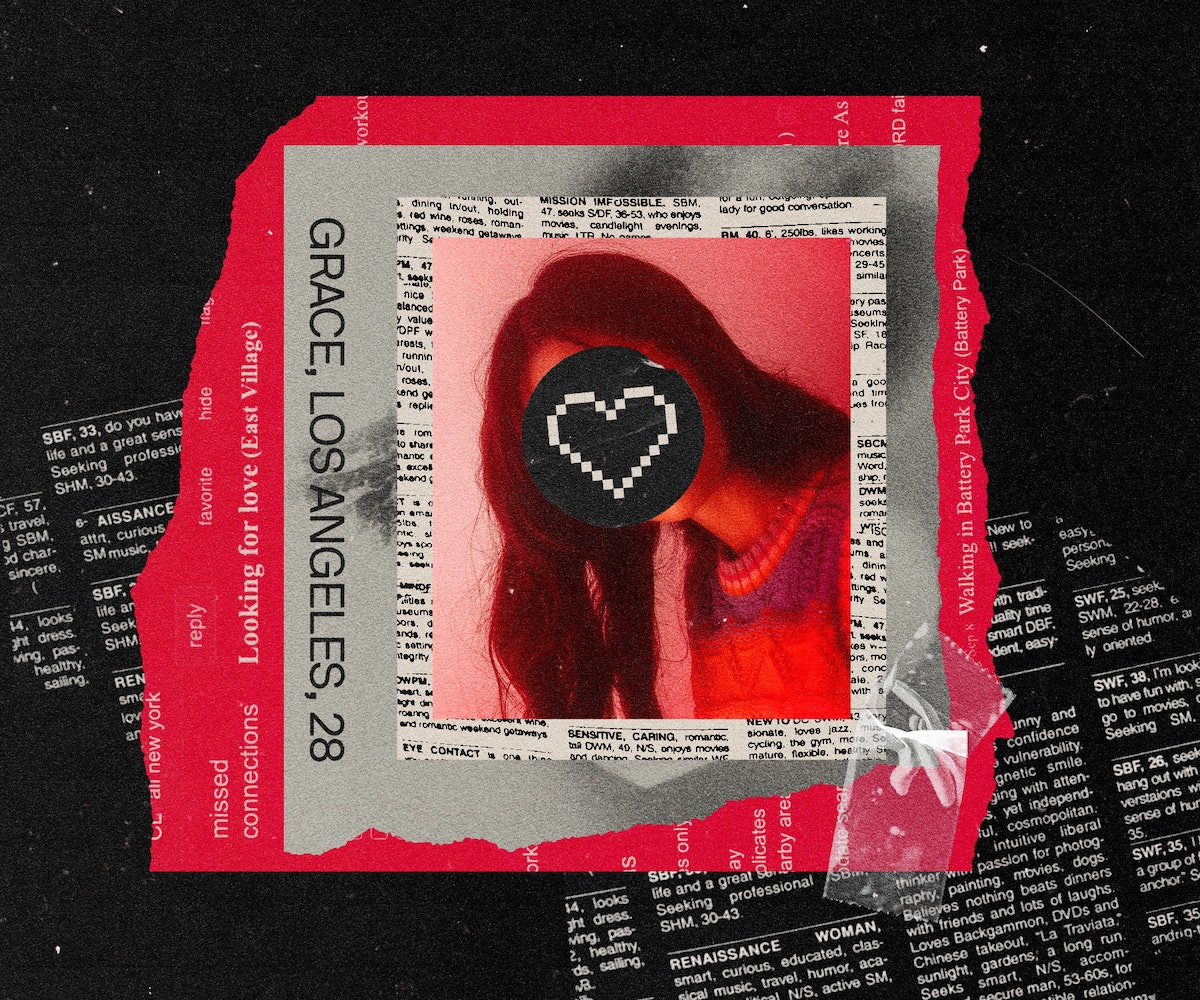 There’s been no shortage of think pieces detailing the trials and tribulations of what it was like to be single in 2020. Unable to meet people IRL, dating apps like Tinder, Bumble, Grindr, and Hinge became the main way singles met, and what once was a quick drink was exchanged for an awkward FaceTime date or a cold park hang that would end when someone had to use the bathroom.

But during lockdown, a new kind of online dating started. A crop of Instagram accounts and newsletters are showcasing single people to a wide, yet self-selecting audience, giving people a chance to meet online, but squarely outside of the apps, in a form of dating that falls somewhere between manic Tinder swiping, Craigslist missed connection ads, professional matchmaking, and a capital-s Single’s events. This is post-lockdown online dating in 2021, where sliding into the DMs is less vulnerable and lower-stakes than ever.

Publicly advertising oneself as single isn’t new: Matchmaking goes back centuries and classified ads and Craigslist ads long connected people before early internet dating sites like Match and apps like Tinder came along. But this new kind of public online dating occurring on social media makes being single an internet performance, one with a campy, self-aware style rooted in the aesthetic and language of original classified and Craigslist ads.

“Every social networking site is, at least secondarily, also a matchmaking site because they allow people to connect,” says Dr. Michael Rosenfeld, a sociology professor at Stanford. “Advertising publicly was the way that singles ads all used to be when they were run in the weekly newspapers, for instance, before the internet era. So there is nothing unusual about this.”

This concept started blossoming in New York City in the spring, around when people started getting vaccinated. In April, the Instagram influencer Nicholas Heller, who goes by @newyorknico, asked single people to send him videos talking about themselves, which he then posted for his half a million followers, tagging his posts as #newyorkniconnections. Anyone who was interested in the singles could message that person directly on Instagram. In May, Sundae School, a boutique smokewear and fashion brand, featured photos and mini-profiles of Asian singles on their Instagram account. There’s a section called “Sweeties <3” in “Are You Coming,” New York Magazine’s weekly newsletter about New York nightlife that features five New York eligible singles “who would absolutely love for you to slide into their DMs.” And each week, the Substack newsletter Hot Singles NYC, sends a Q&A with a single person in New York to its subscribers. There are even rogue “single and ready to mingle” Twitter threads where single people are introducing themselves and using the hashtag #twinder.

This kind of public online dating is what happens when a promised summer of hedonism butts up against severe dating app fatigue. According to VICE, even makers of the apps are saying people are less interested in casual hookups than they purport to be. But for singles publicly featuring themselves online, meeting someone isn’t so much the goal, as is “getting out there,” where you’re guaranteed to have a good story, where you have more control over your audience, and ultimately, where there’s less room to be hurt.

Randa Sakallah started Hot Singles NYC in December 2020 to solve her own problem. After moving to New York in October 2020, she was tired of going on frigid park dates, and figured there had to be a better way to meet people than dating apps. She started collecting emails of all the single people she knew, chose a friend to feature and sent it out to 50 people. She now has 600 subscribers, and says she’s thinking about doing in-person events.

The newsletter harkens back to Craigslist missed connections, with subject lines like “27F Fiery Founder Seeks Man to Bring the Heat” or “28F Open Book Seeks Man For Close Reading,” with very liberal use of flame emojis. Each newsletter includes photos of a single person, with answers to questions like What’s your toxic trait?, What makes you hot?, and What are you looking for? Subscribers can then respond to the email if they’re interested in the person. “The name of the website literally sounds like spam,” Sakallah tells NYLON. “It looks like it’s going to give you a virus, which I think makes it more approachable in a way. It's hard to take yourself seriously when you’re going on a website that has the thirsty emoji all over it and is just kind of tongue-in-cheek.”

Sakallah says singles who are featured get between a handful of email replies, and sometimes a couple dozen. People usually send a few lines about themselves, but one person sent a PowerPoint about why the featured single should date them. Sakallah has a waiting list of people who have submitted themselves to be featured, and says she doesn’t have a specific criteria for who she chooses, but gravitates towards people who have funny responses. She says people usually go on at least a couple of dates, and she knows some people who have dated for a few months. “I've become less interested in whether the dates are successful and more interested in how the conversation, at least in my narrow scope, is changing around being single and dating. It’s not ‘I’m single and I’m happy to be single,’ but more ‘I’m single and dating and that’s cool,’” she says. “It doesn't make people desperate to put themselves on this site.”

Nikhil Krishnan was one of the hot singles featured in the newsletter, as “28M Children’s Book Author Seeks Partner to Read Him Bedtime Stories.” He went on a few dates after being featured and said it was a good way to start dating again after being in the depth of lockdown. “The apps don’t do a good job of being able to showcase your personality and I thought this was a good way to weave together not only what you look like, but also the personality traits that make you unique, so I thought it was a better format,” he says. “You can be self-deprecating and you don’t have to position yourself as a good mate. It’s more why you’re an interesting person generally, and I think it’s a good way to showcase that.”

Nathalie Schrans was featured on Sundae School’s Instagram account in March, as part of something called Stoner Asian Dating, which was done in partnership with the Facebook groups Subtle Asian Stoners and Subtle Asian Dating, where Asian singles can meet. “It was mostly a joke, but I think the part that attracted me was that I didn’t have to do anything. I’d just submit myself and it’s out of my hands,” she says. “There’s a lot of pressure to be on these dating apps and to portray yourself in a certain way, to be desirable, or dateable, or if you want a specific long term relationship, how do you portray all that on a dating app? It makes it a stressful experience if you put all that pressure on it.”

Schrans got several DMs but didn’t really click with a lot of people except for a woman named Rachel, who she is still casually seeing, although long-distance. Schrans says being on the Sundae School account felt more low stakes than being on dating apps, despite the account having 55,000 followers. “Especially now, after people weren’t able to meet up in a normal way, it’s fun to do something different that isn’t dating apps and just have so many people say hi to you,” says Shrans. “The fact that I submitted myself is something to laugh at at the very least — like ‘How weird that we met this way?’”