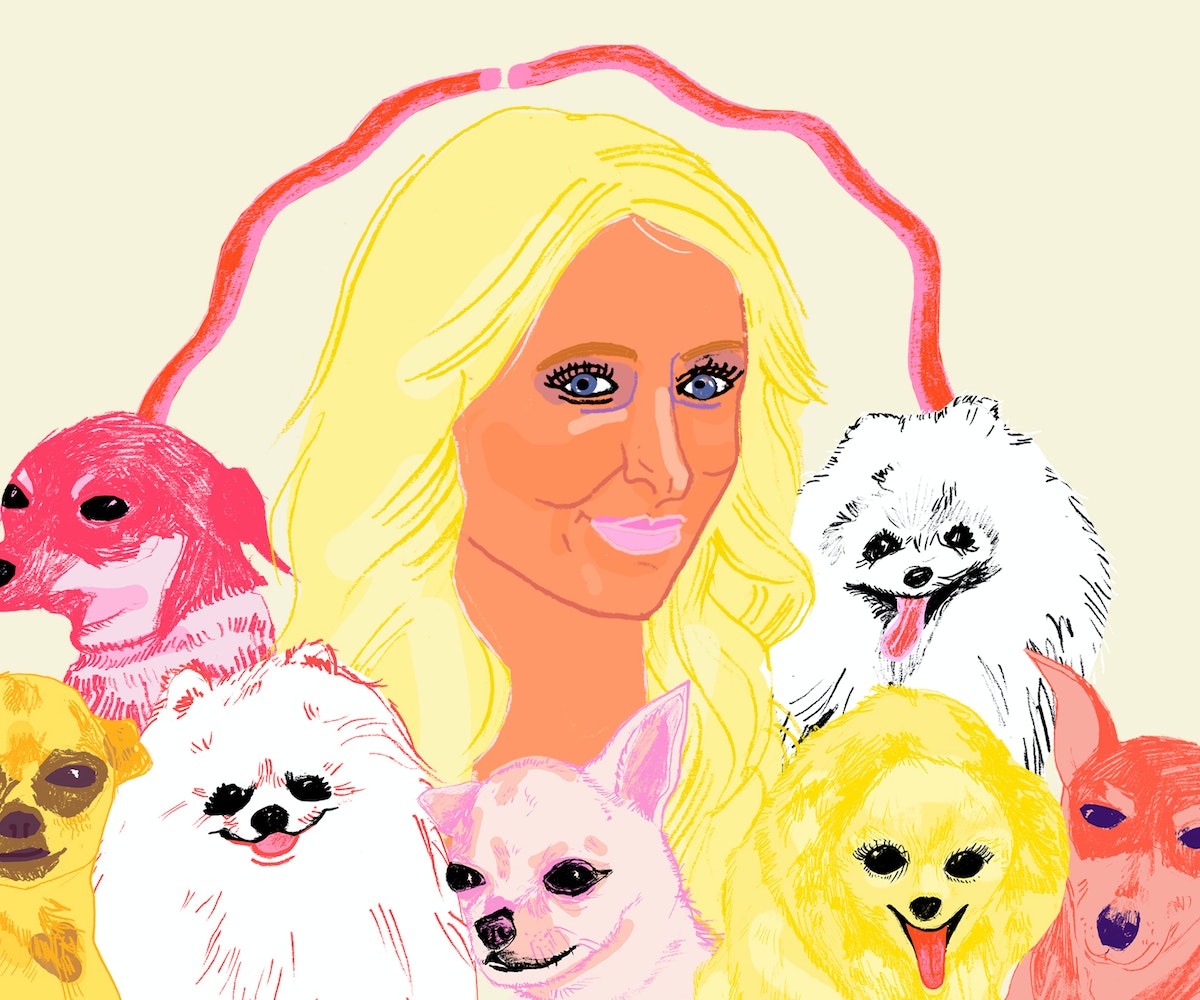 Paris Hilton's love of pets rivals Kel Mitchell's love for orange soda. (Who loves animals? Paris Hilton loves animals.) She once dreamed of becoming a veterinarian, but fame and fortune came faster. "I realized I could just buy a bunch of animals," she once said to the Associated Press. And buy she did. To date, Paris Hilton has a gaggle of pets rotating in and out of her Instagrams, tweets, and Snapchat stories. Some may say the number nears 30.

Earlier this year, Hilton, who has donated to a variety of animal rights charities, launched an Instagram account dedicated to her pets, appropriately titled hiltonpets. "We are the cutest, smartest, coolest, best-dressed pets in the world!" their bio reads. "We love our life! #Killingit." The account, and its corresponding Facebook page, typically follow the lives of Hilton's dogs—of which there are, as you can guess, many. Occasionally, her cats will make an appearance on Snapchat, but felines are fickle and hardly ham it up for the gaze of Hilton's wandering iPhone lens. No, her dogs and their 300-square-foot, Philippe Starck-furnished, Faye Resnick-decorated, air conditioned doggy mansion, located in Hilton's L.A. backyard are the true stars of Paris Hilton's not-so-simple animal life. One of them famously cost Hilton $13K; she purchased another two for $25K (one of which went to her mother). They're harder to keep up with than the Kardashians.

Thankfully, enough internet sleuthing was done to create a mini, informal guide to the royal pooches that steal the show in each and every one of Hilton's Snapchats. May your life be as glamorous as theirs is.

Peter Pan is a Chihuahua that likes to go shopping with mom.

Dollar is a Miniature Pincher Hilton rescued with her then-boyfriend River Viiperi. Dollar used to have an Instagram, but it's gone now.

Mugsy is a Pug. Mugsy doesn't get enough face time on any of Paris Hilton's social feeds. Justice for Mugsy!

Dolce is a Chihuahua. Dolce is Prada's daughter.

Prada is a Chihuahua. Prada is Dolce's mom.

Harajuku Bitch is a Pomeranian with an expensive taste for doggy fashion and is a literal angel.

Marilyn Monroe is also a Pomeranian who frequently appears in Hilton's Snaps, but usually with her adopted Pom family. She is queen.

Baby Bear is a Pomeranian, but also a little dog-bear. There should be a stuffed animal made in the likeness of Baby Bear. Baby Bear is almost not real.

Prince Hilton, The Pom is a teacup Pomeranian that cost Paris Hilton $13,000. He was originally named Mr. Amazing, but later went through a name change after Hilton did a little crowdsourcing. Like Baby Bear, Prince is almost unreal. However, because of his omnipresence on Snapchat, you know he is as real as can be.

Finally, this is Princess Paris Jr. She is a teacup Pomeranian, too. She is also very expensive AND expressive! A true royal is she.