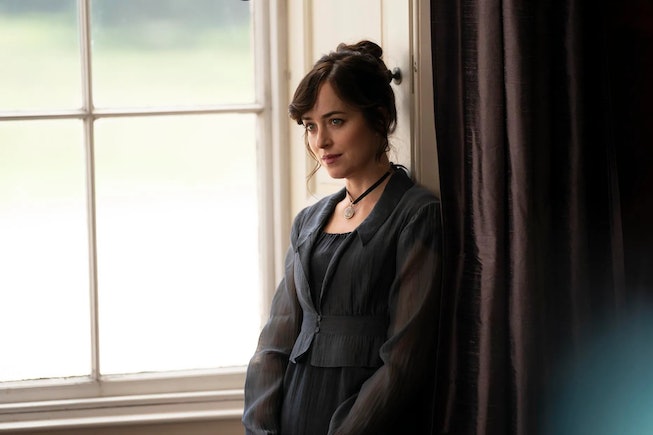 Step aside Fire Island, there’s a Jane Austen adaptation in town — albeit this one features far fewer shirtless men, unfortunately. Despite Netflix apparently being broke, the streaming giant keeps dropping star-studded trailers for series and films to add to its massive catalogue. The streamer dropped the trailer for Persuasion, an adaptation of the Jane Austen novel about — what else! — class and love. Persuasion was Austen’s last novel, and was published six months after her passing in 1817.

Dakota Johnson stars in the adaptation as Anne Elliot, who falls madly in love with Frederick Wentworth (Cosmo Jarvis), but her family forces her to give him up due to his rank in society. Can’t a Regency-era gal catch a break? Lo and behold, years later, he comes back into her life, because they always do, and she must decide whether to take him back or pursue a relationship with Mr. Eliot (Henry Golding), who’s dashing and rich.

Persuasion premieres on Netflix on July 15. Find everything you need to know about the film, below.

Ever since Phoebe Waller-Bridge flicked her eyes directly into a camera in Fleabag, messy protagonists everywhere have borrowed the convention. Persuasion, too, has Johnson looking conspiratorially at the camera, in an effort to make a Regency-era tale more modern. It’s a concept that has paid off for Netflix in the past: Bridgerton remains its most-watched English-language show ever. Though nothing slips out in the trailer, the mood of it suggests that it wouldn't be completely out of pocket to hear someone slip out some colloquial slang, just while wearing a corset.

“Now we’re worse than exes,” Johnson says in the trailer. “We’re friends.” I hear that!

As it turns out, Dakota Johnson is a Jane Austen stan

"Doing a Jane Austen film is the dream,” Johnson told Vogue back in December. “There are only a few of them so I feel incredibly lucky. The cast is amazing and our director Carrie Cracknell is fantastic. I think they're still in the edit, but I'm so curious to see how it turns out." That makes two of us.