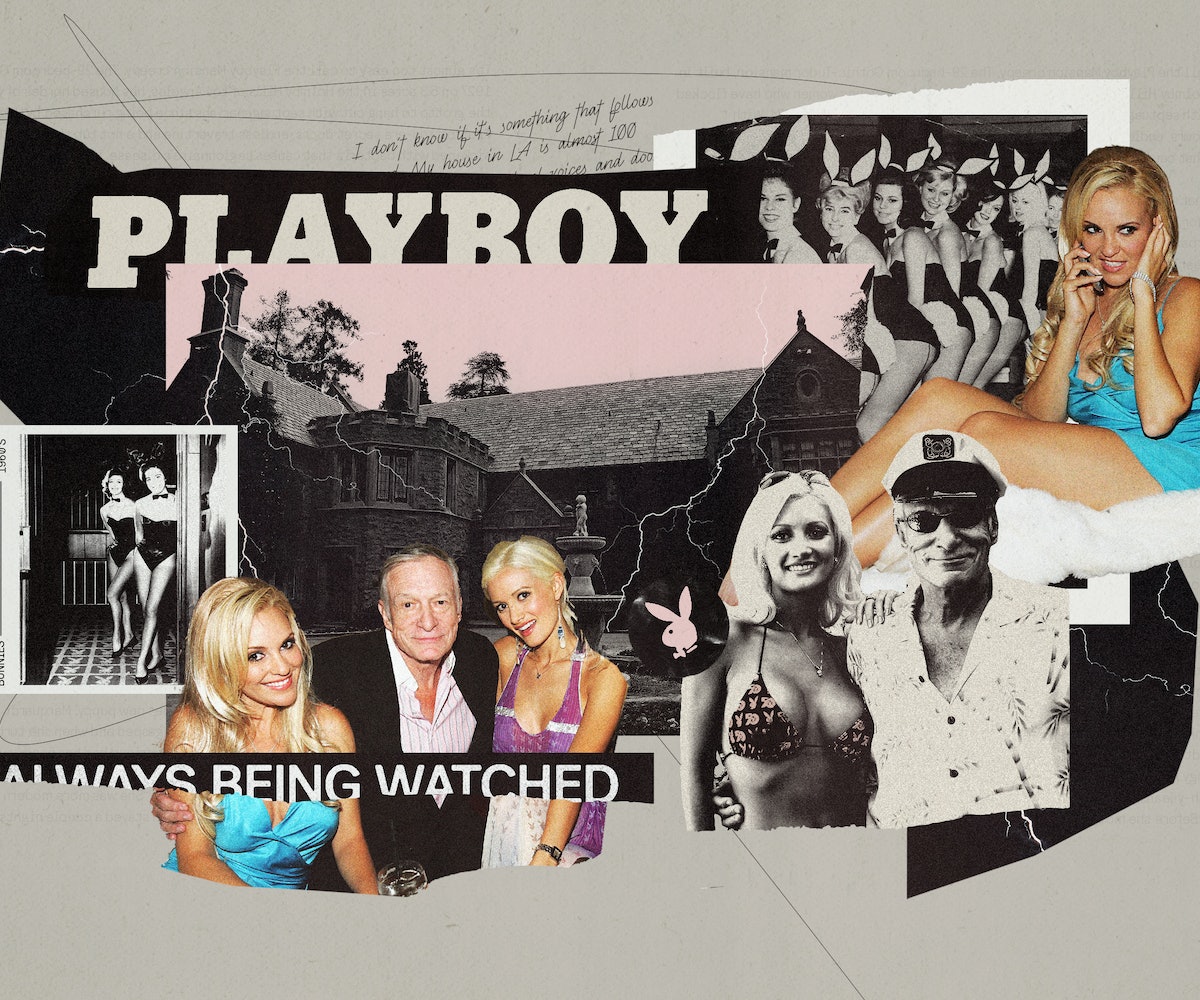 It’s almost too easy to call the Playboy Mansion creepy. The 29-bedroom Gothic-Tudor mansion, built in 1927 on 5.3 acres in the affluent Holmby Hills neighborhood of Los Angeles, has been home to hordes of young women who have flocked the grotto to hang out with septuagenarians since Hugh Hefner purchased the home in 1971. With Prohibition-era secret doors, endless travertine, and a hot tub that in 2011 caused 123 people to be sickened with bacteria that causes Legionnaires’ disease, it would almost be stranger if there weren’t ghosts lounging around.

“The mansion is a home that’s very intriguing for so many reasons,” Holly Madison, who lived there as Hefner’s girlfriend from 2001 to 2008, tells NYLON. “People talk about it being haunted. There’s all these weird urban legends like trafficking tunnels. It takes on a life of its own.”

Madison says that in the early 1970s, neighbors called it “the haunted house” because of how much it conjured a mansion straight out of Scooby-Doo, situated behind a large gate with overgrown foliage.

Since moving out of the mansion, Madison and her former housemate Bridget Marquardt, best known as the stars of E!’s The Girls Next Door from 2005 to 2009, which documented life inside the Playboy Mansion, have become ghost hunters in their own right. They’re both appearing on an episode of Ghost Adventures, a Discovery+ show that follows ghost hunters as they explore allegedly haunted locales, on Aug. 5. Madison’s boyfriend Zak Bagans is one of the shows’ hosts, and the episode takes place in her Los Angeles home.

Madison was a reluctant believer in the paranormal while she lived in the mansion but can no longer deny she’s become somewhat of a ghost magnet. Her paranormal experiences started ramping up when she was pregnant with her now 8-year-old daughter, and for the last eight years, every house she’s lived in has been haunted. She says sometimes things scare her, like when she thinks someone may have broken in, but she mostly enjoys it.

“I don’t know if it’s something that follows me around,” she says. “My house in L.A. is almost 100 years old. There’s all kinds of voices and door opening and disembodied voices. I enjoy it, though; I like the entertainment.”

Marquardt has long felt a connection to the otherworld. “I feel like I was born spooky,” she says, explaining that she had her first paranormal experience when she was 12 and saw her deceased great-grandfather after playing with a Ouija board. She’s since made the paranormal her second career. While living in the mansion, she took classes in paranormal investigation and research and ultimately became certified in paranormal investigation and in parapsychology, which she’s also currently studying. In 2019, she started her podcast, Ghost Magnet, on which she talks to guests about their paranormal experiences, including Madison, who appeared on an episode to talk about the Playboy Mansion ghosts.

“You definitely felt the nostalgia and the old energy,” Marquardt says of living in the mansion. “I had little things happen.” Sometimes TV channels or the volume would randomly change, and once, while her sister and friend were over helping take care of her new puppy, Marquardt saw a woman standing in the doorway of her closet looking into her room. She gasped, and when she turned to get a better view, the woman was gone. Marquardt’s sister was crying; her friend had her hands over her eyes.

“She had long, black stringy hair, very pale, very thin. She was wearing a white T-shirt that was too big on her and black acid wash-y jeans,” says Marquardt. “She was more modern day and I feel like I recognized who she was.” Before she moved in, she’d stayed a couple nights at the mansion, and there was a woman named Joanie who was like a house mom, helping out the women staying in the mansion and taking care of the pets. When Marquardt moved in, she learned Joanie had died of cancer, and she has a hunch that’s who the ghost was. “There was a new pet in the house, and she was just seeing what was going on. I think it was a loving thing, but it’s scary because it’s shocking.”

Madison saw a ghost, too. While she was in the basement gym, she saw a woman come out of the bathroom and cross in front of her and out of her line of vision. The woman was contemporary-looking, wearing a hot pink sports bra and black workout pants, and Madison figured she was a Playmate who was doing photo tests. Madison walked around the corner to see where she had walked to and saw another door and figured she’d gone out that way. But when she opened the door, it was just a shallow closet. There wasn’t any way the woman could have exited the gym without passing Madison again — she had vanished. “I never saw that woman again in my life,” she says.

Another time, Madison and Marquardt were scrapbooking in Marquardt’s room, and Madison said she felt like she needed more proof before she could say she believed in ghosts and wished she could have a sign. At that moment, the TV turned on by itself and the volume went up to full blast.

“Even though I’d seen that weird thing with the disappearing woman in the gym, sometimes when those things happen, you try to rationalize them away,” says Madison. “For me, it took a bunch of different experiences before I thought ‘OK, there’s something weird going on here.’ I said I wish I had more proof it was real, and right away when I said that, her TV turned on by itself and the volume went all the way up.”

Some of this lore was captured in The Girls Next Door. In Season 1, Episode 10, “Ghostbusted,” Marquardt hires a paranormal investigator and a medium to come do a seance; the women talk about weird experiences they’ve had in the mansion, including Marquardt’s sense of “always being watched.” The investigator found high levels of paranormal energy in various parts of the house, getting the biggest reading in Marquardt’s room, but he also found higher levels when he placed the machine near the women’s butts, in a scene that deeply epitomizes 2000s cable TV humor.

Of course, there’s also an original Playboy Mansion ghost story. Marquardt says the original owners, businessman Arthur Letts Jr. and his wife, lived in the house, and there’s a rumor that she jumped, fell, or was pushed from the balcony onto the marble floor and died — and that she haunts the mansion still. When Marquardt was researching for one of her paranormal classes, she tried to find proof that somebody had died in the house but wasn’t able to, though says she wants to do more research now that she’s more highly skilled.

Madison said she talked to Hefner about her paranormal experiences, but “he’s not a believer,” and told her the story of Mrs. Letts was made up by a woman he dated in the ’80s.

Marquardt also says the staff who worked in the mansion had ghost stories of their own, and that some housekeeping staff were afraid to go to the gamehouse, a room with pinball and arcade games. Staff told Marquardt that sometimes the games would turn on by themselves or doors would randomly slam shut.

“You didn’t feel good about going out there by yourself,” says Marquardt. “There was something very unsettling for sure. Housekeeping would always ask for someone from security or a butler to go out there with them.”

Brian Olea, who was the guest services manager at the mansion for two decades, and also hosted the show Mansion Mayhem on Playboy Radio, said he’d often hear from housekeeping staff and butlers about paranormal experiences, like hearing footsteps walking behind them in the hallways. Graveyard butlers told him they didn’t want to go upstairs at night because they felt a weird presence around them. Once, one of the maids told him that while cleaning the gamehouse, the door the maid had propped open suddenly slammed shut, the jukebox started playing, and a couple keys on the piano dinged. She refused to continue cleaning unless security was there.

“The fun of the mansion is that it is an old-styled Tudor mansion that you’d expect in a movie to be haunted,” says Olea. “And then you have a personal experience that kind of makes you wonder what’s going on here.”

He was waiting for a Playboy executive’s meeting to end in the library so Olea could get it cleaned up for an event. When the executive left, he went to clean the library, but the door was locked. Security tried a key, but it didn’t work. Olea went to talk to a security guard to confirm the exec had left through the front door. And when he came back to the door, it was open 2 inches.

“Every hair on my body stood up,” he tells NYLON. “I looked over at the scrutiny guard and he’s like ‘Whoa, whoa, whoa!’ and I said, ‘You saw this, too; we’re not making this up. Nobody is going to believe us. What the hell just happened?!’”

Madison recently answered a question on TikTok about the Playboy Mansion being haunted and recounted her ghost story. The video has since been viewed 4.2 million times.

“Sometimes when people ask me about the mansion, they’ll ask me about personal stuff or stuff that isn’t pleasant to talk about, but when they ask little details like ‘Was there an Elvis room?’ or ‘Was the mansion haunted?’ I love answering those,” she says. “I think that people, especially younger people, are so much more into the paranormal now than ever before and in general society is waking up to a more spiritual nature on all levels.”

Some of Madison’s paranormal experiences happened when she was sick or didn’t want to be around people anymore. She’d hide out in one of the always empty bathrooms on the second story of Hefner’s bedroom as a necessary reprieve from the mansion’s constant influx of guests. She described it as being like a time capsule from the early ’80s, one that even had products on the counter that had never been touched.

“I would go hide in that bathroom. It was the one place in the house where nobody would go, and sometimes the toilet would flush by itself, and I always thought that was kind of weird. It always came during these weird, introspective moments at the time,” she says. “I don’t know what they were trying to tell me.”

NEXT UP
Culture
The Biggest Revelations From The Price Of Glee Docuseries
Culture
Angelus Turns 25: The Devastating Twist That Changed Buffy The Vampire Slayer & TV Forever
Culture
Phoebe Dynevor Will Not Return for Bridgerton Season 3
Culture
6 Shows To Binge Once You've Finished 'The White Lotus'
Style + Culture, delivered straight to your inbox.