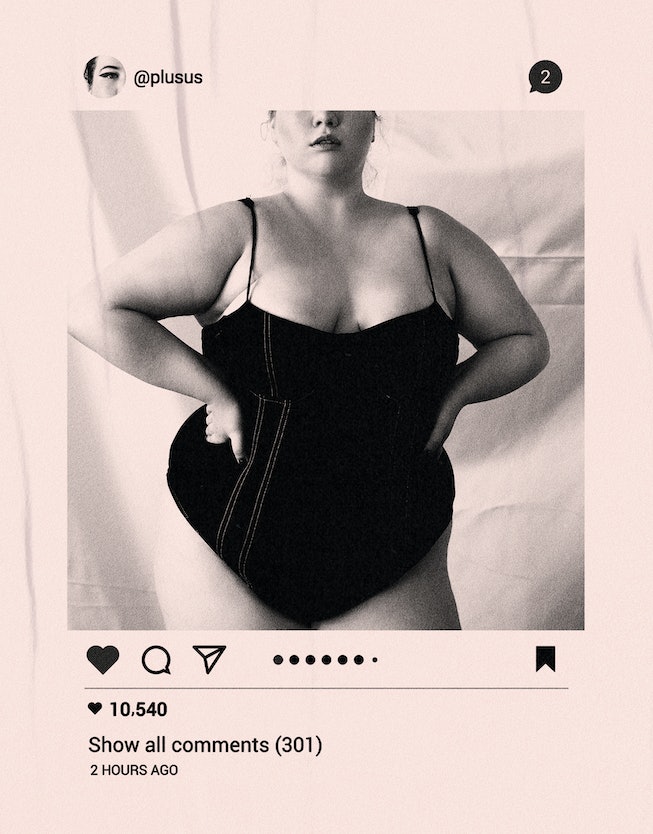 The comment section of any plus-size advocate’s Instagram page is often a war zone, inundated with faceless profiles and troll accounts spewing hate. Among their boldest claims is that, by simply existing and choosing a life of happiness and visibility, these plus-size women are — brace yourselves — “promoting obesity.”

The term itself has been widely used as a weapon against the body positivity movement, specifically since its spread across the internet over the last decade. But “promoting obesity” is not fact. Rather, it’s ignorance, riddled in deep fatphobia and anti-fat bias that aims to silence those who, instead of living to change their bodies, have chosen to embrace them instead.

By definition, to promote means, “to help or encourage to exist or flourish; further.” Under troll logic, plus-size models and influencers showcasing love for their bodies is, in and of itself, promoting obesity, as they’re allowing fatness to not only exist, but to flourish. However, this mindset is ignorant to the message at hand. Because few (if any) are outspokenly advocating for the increase in fatness. Rather, the movement they hope to push forward is that of self-love and acceptance across all body types.

Body positivity has transformed into an umbrella term, encapsulating multiple movements that align in their morals but differ in specifications. Among them are the Fat Acceptance Movement — started by Black women in the 1960s, aimed at the liberation of fat folk — and the self-love phenomenon: a social media-driven (and largely commercialized) push welcome to all, regardless of size, background, ability, or marginalization.

While differing in intention and action, each of these movements align in their core values: Acceptance and love of the bodies we possess. That is the message being promoted. Refusing to hate one’s fat body is not promoting obesity. To encourage others in similar bodies to love themselves is not promoting obesity. But for those with a limited perspective, the opposite can appear to be true. Much of that is tied to the ways in which society has taught us to view weight.

For decades, society and the media have taught us that those who are curvy, plus-size, fat, etc. should, rather than aim for self-acceptance, pursue a lifelong journey of physical change. And while studies show that over 80 percent of diets fail and much of our weight and body is tied to genetics, those whose sole life goal is to become thinner are viewed as brave, strong, and persistent. Society pities them, pats them on the back for their efforts, and turns a blind eye to the methods they use — even when disastrous — to shrink down.

In many ways, society cares less about health and more about appearance. Fat folk who publicly express distaste for their bodies are accepted. Those who lose drastic amounts of weight, whether through surgery, extreme dieting, even disordered eating patterns, are rewarded with congratulatory remarks. Yet those who choose the opposite — the ones who, like me, decide to offer our bodies some love and who refuse to let our bodies prevent us from living life to the fullest — are labeled as unhealthy, or on a mission to kill more Americans through the promotion of fatness. In actuality, however, we are simply breaking the fatphobic status quo.

The antiquated narrative written around fatness over the past century has depicted larger bodies as moral failures. It has painted people like me as self-inflicted flaws in God’s plan. And in the eyes of internet trolls, the only way to reverse our “damned to hell” lifestyle is to actively alter our bodies.

The rise in the promoting obesity mindset has increased as fat visibility has taken center stage. While similar comments have always existed, plus-size representation remained limited to size twelve bodies and below until the rise of Tumblr and LiveJournal, followed by Instagram and bloggers. Then, with no one to dictate who could be seen and heard, an influx of bodies emerged onto our screens representing the full spectrum at hand. It was then that society at large felt too uncomfortable with what was being promoted and flaunted, and began to express a hatred for larger bodies that pushed the boundaries simply too far.

They claim that bullying fat folk is wrong, sure, but the glorification of such is damaging to society as a whole. Their logic, riddled in irony and ignorance, fails to understand that by saying such, they are, in fact, promoting a new kind of bullying. Much like the “hate the sin, love the sinner” mentality that is used towards the LGBTQ+ community, this rationalization claims to be anti-hatred, yet shows a strong distaste and disapproval for our current state of being.

Is it fine to be fat? Yes. Someone’s health status, humanity, and mortality is not dependent on an outsider’s point of view. We know the facts. We know the studies. We know the statistics. And with that knowledge, we each make our own choices.

Is fatness a choice? Maybe, maybe not. Is hatred towards fat bodies a choice? Always. Promoting obesity is yet another method to silence a community who has long been rejected from the media, from fashion, and from the medical industry, where bodies like ours are villainized.

But representation is going nowhere because statistically, neither are we. And that is fact.