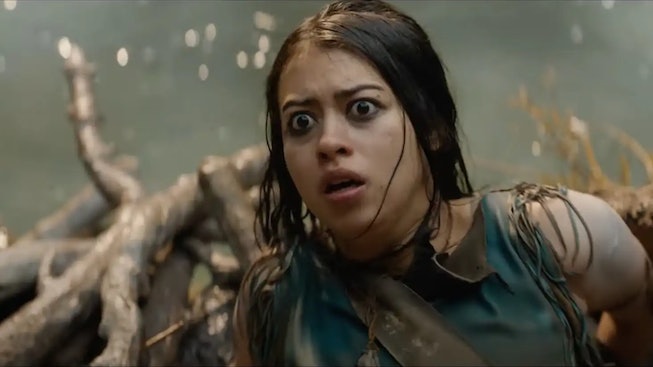 The reboot wheels are greasing and expanding: Instead of getting yet another entry into the Predator franchise, we’re getting a spinoff: Prey.

The film is set in the Comanche Nation three hundred years ago, and following Naru (Amber Midthunder), a highly-skilled warrior who usually hunts to live — but who must protect her people when an alien predator comes to threaten her camp.

The new film from the Predator franchise has all the makings of a great summer thriller: a spunky heroine wielding a bow and arrow, sweeping shots of nature (in this case, the Great Plains) and a force of evil that conjures dramatic, urgent music. Which makes sense: An arsenal of blockbuster masters are helming the project. Dan Trachtenberg of 10 Cloverfield Lane is directing the film, based on a script by Patrick Aison (Jack Ryan), with Lawrence Gordon (Watchmen) among the executive producers, with Predator producer John Davis and Jhane Myers (Monsters of God).

Prey premieres August 5 on Hulu. Find everything to know about the film, below.

One of the film’s producers, filmmaker Jhane Myers is a member of the Blackfeet and Comanche nation herself, and is best known for her storytelling that honors the legacies of the Native communities, as well as accurately captures them. The film’s cast is almost entirely of Native and First Nation’s talent, including Midthunder, newcomer Dakota Beavers, Stormee Kipp, Michelle Thrush and Julian Black Antelope.

“When I was a little girl reciting scenes from my favorite Disney shows and taking playing pretend extremely seriously with my friends never did I ever imagine I would see something like this😭🤯😢,” Midthunder posted on Instagram on Tuesday. “I’m so proud of this movie and what it means - not just to me but hopefully to my people as well.”

The film has been in the works since 2016

Trachtenberg and a writer had been conceptualizing the film since 2016 and in 2018, during production of The Predator, approached Davis with the idea. It was originally going to serve as an origin story for the villains.

"It goes back to what made the original Predator movie work,” Davis told Collider. It's the ingenuity of a human being who won't give up, who's able to observe and interpret, basically being able to beat a stronger, more powerful, well-armed force," he explained.

The film is the first to offer a Comanche language dub

The filmmakers considered making the film in Comanche, a la Hunt for Red October, but eventually settled on English. According to Hulu, “Prey will be available on Hulu entirely in Comanche as a language option, or with Comanche subtitles, which is the first time a feature-length movie on a direct-to-consumer streaming platform has been available in the Comanche language in its entirety."

The trailer is action-packed

The Prey trailer has it all: the threat of mauling from an angry bear, a close-knit tribe, a sophisticated alien predator that lives to hunt, and a girl ready to save the day.

NEXT UP
Culture
Scream 6 Trailer Brings The Nightmare To New York
Culture
The Biggest Revelations From The Price Of Glee Docuseries
Culture
Phoebe Dynevor Will Not Return for Bridgerton Season 3
Culture
Succession Season 4 Trailer Explodes With Family Drama
Style + Culture, delivered straight to your inbox.