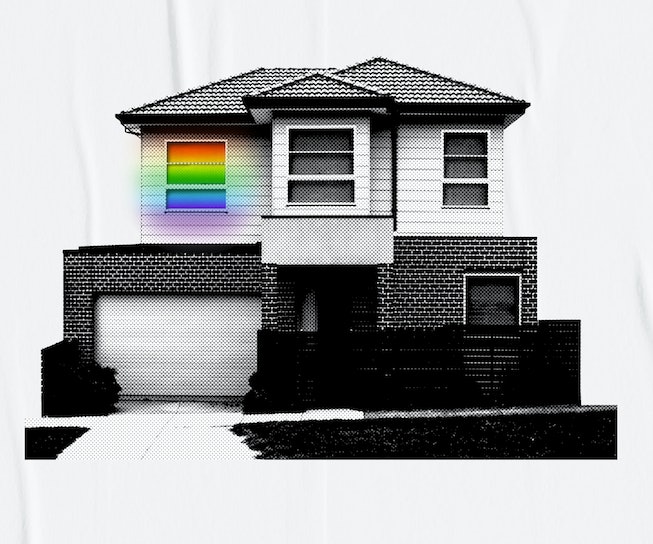 While away at college, 21-year-old Odessa* lived openly queer. She found a girlfriend. She was planning to come out to her parents once she locked in a full-time job for after graduation, solidifying her independence. But during her last year of school, the COVID-19 pandemic put a snag in those plans. Now she's back at home in Houston quarantining with her family and back in the closet. After being out on campus, it's a struggle.

Odessa's parents are immigrants from India and devout Christians. The family prays together nightly. Sundays are reserved for a live-streamed service from the church Odessa attended in high school. She says the sermon is full of homophobic statements from the pastor that often cross over into outright hatred.

“I'm often moody and inwardly angry with my parents for believing in this stuff,” Odessa tells NYLON. "I keep my composure by thinking about being back in college or with my girlfriend," whom she calls in secret. When she tells her family stories about her life on campus, she is careful not to use her girlfriend's name and downplays her importance. “Even though I place a lot of blame on my parents, I try to calm myself and release that blame,” she says.

Many young LGBTQ people are stuck at home with homophobic parents due to the current pandemic. Some are out, others are not. In an arduous and potentially precarious situation, these members of the queer community have turned to a slew of coping mechanisms to weather the storm — largely ones made available through the internet.

For Odessa, she's discovered writing and painting as a creative outlet. Spending time with her dog and reading astrology have provided refuge. Then there are Twitter and TikTok, which have offered some laughs through the hard times.

“My FYP [TikTok For You page] has lots of queer people who are going through the same things I am and using humor to cope,” she says. “They’re all really funny, and it makes me feel less alone.”

In the UK, 22-year-old Sim, who graduated last year, has been living back home in London with her anti-LGBTQ parents, who don't know that she is a lesbian.

“I'm out to most of my friends, so I stay in touch with them regularly, and we talk about how we’re all coping,” Sim tells NYLON. “Twitter has been a huge help, too, because there’s a lot of positive gay content.” She likes the funny memes and videos about gay culture and how they raise awareness about LGBTQ rights, debunk common stereotypes, and fill people in about queer history, such as the origins of Pride month. With Pride parades and celebrations cancelled in many of the major cities due to the coronavirus crisis, Sim will probably plan for a FaceTime session with her friends so they can celebrate together, even if it’s over screens.

a.t. furuya, youth programs manager for GLSEN, a nonprofit that works to end bullying and discrimination against LGBTQ people through education, tells NYLON that queer youth living in home environments hostile to their identities may adjust their appearance or the way they speak at home to avoid being outed. "Being constantly misgendered, criticized, or otherwise invalidated by homophobic or transphobic family members can create serious mental health crises for young people," furuya says. They note that in the wake of the police killings of George Floyd and Breonna Taylor and the Black Lives Matter demonstrations that have followed, Black LGBTQ youth and queer youth of color, who are always at greater risk, are even more vulnerable. "[They] are currently facing mental and physical health threats in the form of white supremacist violence," furuya says. For them, "remaining connected to LGBTQ peers and outside resources is even more critical."

For those who are out to their parents, living at home can mean direct criticism and rejection. Due to the pandemic, Drew Rizzuti, 25, is living in the homophobic household where he grew up in San Diego. He came out in 2018; he didn't come out when he was younger because he feared being sent to a conversion therapy camp. Bullied at school, he also experienced suicidal ideation.

Of living at home, he says, “I knew going into it they were going to struggle with me being gay [and] trans. I just didn’t know they were going to struggle this much. They started saying things like, 'We don’t support your choice to live this lifestyle. You’ll never be a real boy. How can you be gay and trans?'” he says. “What I crave most of all is my parents' [and] brothers' support, and I don't get that. I just want them to see it's not choice, and I'm still the same person I was before I came out. I try to talk about LGBTQ stuff with them, and it always ends in a very heated conversation. Basically my whole identity is an off topic.”

During quarantine, he’s turned to a specific online community for affirmation: supporters of former Democratic presidential candidate and South Bend, Indiana, Mayor Pete Buttigieg. Rizzuti canvassed locally and phone banked for Buttigieg during the campaign and watches every Instagram Live session hosted by the former mayor's husband, Chasten Buttigieg, whom he calls "a real source of inspiration." Rizzuti also finds solace going on runs and long drives, and listening to music. When he's out of the house, he shows a bit of his pride by wearing his rainbow face mask.

Violet*, a 20-year-old from Miami, is a rising junior at a historically women’s college who returned home in mid March due to the pandemic. Pansexual and nonbinary, they are not out to their Christian parents, who they say “talk sh*t about gay folks,” but they do selectively call their parents out on homophobic rhetoric and their father's racist rants. Violet recalls watching Netflix’s The Big Flower Fight recently with their family and their mother asking if everyone on the show was gay, using a homophobic term in Spanish for gay men. Violet recalls saying, “They’re not all gay,” and leaving it at that. They don’t think their parents will ever fundamentally change, but they hope to keep their younger sisters from developing a similar mindset.

“Once my sisters and I are all out of the house, I can come out [to my parents] and just let them rot or accept me or whatever they want to do, but for right now I’m just worried about my sisters,” Violet tells NYLON.

Violet has found comfort in entertainment with LGBTQ storylines. They cried over the series finale of the Netflix reboot of She-Ra, which confirmed a long-hinted-at queer attraction with a kiss. They are Killing Eve and Riverdale fans, and in quarantine they've finally had time to watch Glee, a series they missed out on when it first aired. "Watching so many other folks dealing with the same struggles as me is validating. Seeing older QTPOC folks happy and healthy gives me hope, but also these stories are fun to watch," Violet says. They've also been watching Twitch streams and Instagram Live sessions from various creators and interacting with other fans online. It's a lot of screen time, Violet says — "some days, I’ve been on TikTok for entirely too long" — but it's worth it. Luckily, their parents backed off their device usage during their first year of college, which has made connecting with queer peers easier. Before that, they didn’t have that respite.

"I've heard from students using all kinds of platforms to connect, whether it's through gaming apps like Houseparty, engaging in conversations on Twitter, sending individual texts or calls using a transgender person’s name to affirm them, or jumping on a Zoom or Google Hangouts call with their [gay-straight alliance]" on campus, furuya says, adding, "It's also important to take a break from social media and practice self-care such as meditation [or] exercise."

Looking ahead to when COVID-19 dissipates and they are no longer living at home, queer young people have varying ideas of what their future will hold. Some believe a better relationship with their families is possible.

"I plan on moving out within the next year, and I hope maybe that way I can give my family some space,” Drew says. “Hopefully they will eventually come around and see that it’s OK to be part of the LGBTQ community and that’s it’s a place for everyone — not just queer people.”

Others are thinking more broadly: “I hope I can live in a world where police don’t exist, where people don’t die in the streets, where kids don’t get stuck with the choice between sh*tty parents or the foster system,” Violet says. “[It] sounds basic, but I just hope that someday everyone will be OK.”

*Name changed for anonymity and safety.