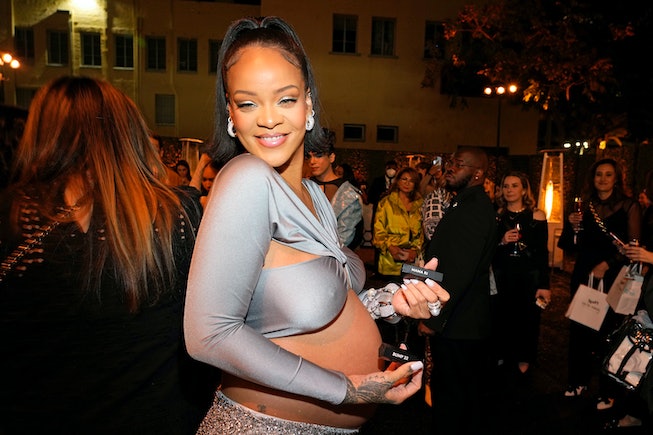 Today the Instagram gods bestowed us with a look at what contemporary high art could be. What if the hallowed, tourist-ridden halls of the Metropolitan Museum of Art housed not only neo-classical sculptures of ancient Grecians with perfectly-proportioned bodies, but a sculpture of Rihanna?

Vogue gave us a small glimpse into this lovely utopia on Tuesday, when they posted a video with a digital rendering of a pregnant Rihanna as a marble statue alongside other marble statues at the Met. “The statue of ‘Eirene (The Personification of Peace)’ is usually the highest-profile marble goddess @themetmuseum Greco-Roman galleries,” Vogue wrote on Instagram. “But now we’ve got @badgalriri, straight off this month’s Vogue cover.”

Rihanna is doing the belly-bump pose she’s become famous for with the vines of her Alaïa bodysuit carved into the animated marble sculpture’s facade. At first glance, it looks real — so real that several outlets are in fact referring to it as a marble sculpture. Unfortunately, the Met isn’t going to be selling out with people eager to pose next to a Rihanna sculpture anytime soon. On average, casting sculptures in marble would take the sculptors of Ancient Greece at least 12 months to complete, which is in fact longer than the gestation of a pregnancy. Though it feels like we’ve been graced with Rihanna’s groundbreaking, post-maternity wear pregnancy fashion for years now, the pop star only revealed her pregnancy in late January, so it’s unlikely anyone would have had time to carve a life-size statue. With today’s modern technology, we’re guessing it doesn’t take upwards of a year, but then again, the ancient Greeks didn’t have Twitter to distract them.

Still, let this be a call to the marble sculptors out there: As of today, your chosen medium is no longer obsolete. There is, in fact, a demand for marble sculptures, so long as they are of Rihanna, who praised the creation herself with an Instagram grid post: “Shut down the met in marble! what’s more gilded than that? Y’all bad for this one.”

A Rihanna sculpture only makes sense. There’s arguably no celebrity who has reached peak cultural deity status, which she cemented when she dressed as the Pope for the 2018 Met Gala. Furthermore, the rendering of Rihanna is the first and only sculpture at the Met that shows a pregnant woman — reason no. 400 someone needs to start casting this sculpture, ASAP.