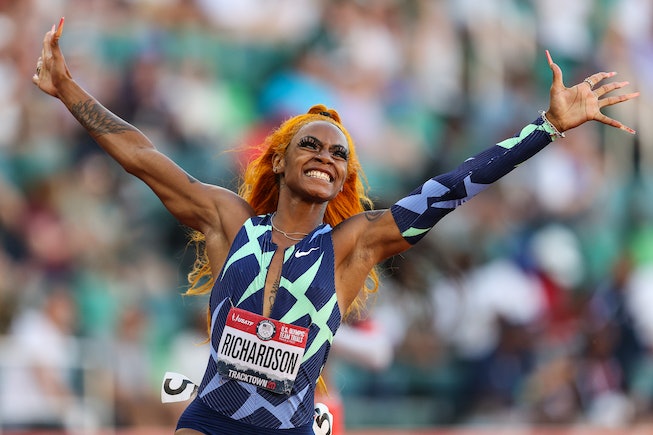 The 2020 Tokyo Olympics haven’t even kicked off, but Sha’Carri Richardson is already a star. With fantastic nails, bright orange hair, and a palpable cool-girl energy, the 21-year-old sprinter secured her spot in the 2020 Olympics on June 19, after winning the Women’s 100-meter final on day two of the 2020 U.S. Olympic Track & Field Team Trials, finishing the race in just 10.86 seconds. “I just want the world to know that I’m that girl,” she told NBC after finishing the race. We’re already convinced! Below is everything what we know so far about the rising star athlete.

Immediately after winning the race, Richardson ran to her grandmother in the stands and collapsed into a long hug, in an extremely touching video that went viral over the weekend. Afterwards, she was asked in an NBC interview about family and she shared she lost her biological mother last week, saying:

"My family has kept me grounded. This year has been crazy or me. Going from, just last week, losing my biological mother, and I'm still here ... I’m still here. Last week finding out my biological mother passed way and still choosing to pursue my dreams, still coming out here and still making sure to make the family that I do still have on this earth proud, and the fact that nobody knows what I go through — everybody has struggles and I understand that,” Richardson said. "Y'all see me on this track, and y'all see the poker face that I put on but nobody but them and my coach know what I go through on a day-to-day basis and I'm highly grateful for them. Without them, there would be no me. Without my grandmother, there would be no Sha'Carri Richardson. So my family is my everything. My everything until the day I'm done."

Both on and off the track, Richardson rocks a signature glam style, and is already famous for her bright orange hair, which she says was her girlfriend’s idea. She told USA Today, “My girlfriend actually picked my color.... She said it spoke to her, the fact that it was just so loud and vibrant, and that’s who I am.”

Other Instagram posts show her rocking tan, thigh-high patent leather boots, blue hair, feathered stilettos, and of course, very fun Nike running outfits, like the mermaid-colored one-piece she wore during the race. She also rocks fake eyelashes, jewelry, and long acrylics while racing, and has a floaty sleeve of tattoos.

Richardson is being compared to Florence Griffith Joyner, the fastest woman in history, who also competed in the 100-meter sprint, in the 1988 Olympics. Joyner was known for her signature style, often wearing outfits she designed herself. (Beyonce and Serena Williams have also paid tribute to her iconic style.) Joyner also kept her hands pretty with long acrylics, which Richardson has noted.

“Flo-Jo came to the track and knew she was going to dominate,” Richardson told the Associated Press. “The way she did that was graceful. I always liked that. If the amazing Flo-Jo had long nails, there was no excuse why I couldn’t have long nails,” she added.

The U.S. has not won Olympic gold in the women's 100-meter dash since 1996 — before Richardson was even born. The 21-year-old is the the youngest member of Team USA’s 100-meter qualifiers and could be our best chance at bringing home the gold in years. We’re rooting for her!

NEXT UP
Culture
“Goblin Mode” Is The Word Of The Year
The Art Issue 2022
True Life: My Partner Is Obsessed With NFTs
Culture
An Exhaustive Breakdown Of The Balenciaga Controversy
Culture
Spotify Wrapped Is The Only Social Media That Doesn’t Lie