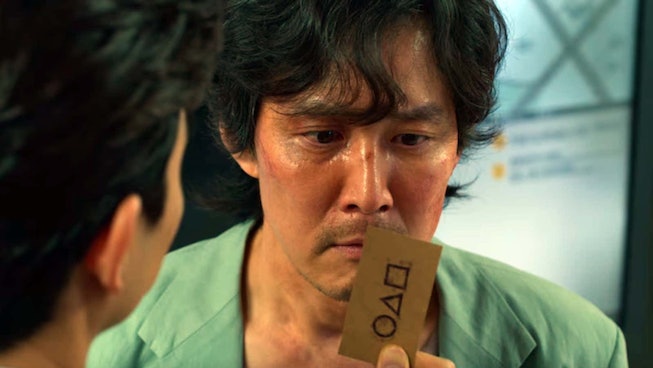 Netflix is making some edits to Squid Game, the Korean drama that is on track to be its most popular show of all time. But not because of its brutality or explicit content: It’s removing a phone number.

In Squid Game, a phone number on the back of a brown paper card stamped with a circle, a triangle and a square is central to the dramatic crux of the first two episodes. After he is chosen by an anonymous, well-dressed man to play a children’s game to earn money, our desperately debt-laden protagonist Seong Gi-hun is given a card with a phone number on it. In order to opt into Squid Game — where players compete to the end for the chance for their debts to be paid off — you must call the phone number. Later, he shows the card to the police, and the number is disconnected.

It turns out that’s a real number on the back of the card — and several Korean citizens who have the same number or even phone numbers close to it say they’ve been bombarded with prank calls and messages since the show’s premiere, according to the Wall Street Journal.

Hanna Kim, an office worker in Seoul told the WSJ she started receiving calls and texts from strangers asking her, “Is this Squid Game?” She reached out to Netflix and Siren Pictures, who told her they wouldn’t compensate her for any inconvenience. WSJ talked to another man in South Korea who said he received 4,000 calls a day, and now needs medication to sleep at night from the stress. Sure, Squid Game is insanely stressful to watch, mostly because of the real life implications of the enormous debt crisis in South Korea — but it shouldn’t be scary IRL. The poor man says he doesn’t even watch Squid Game, which is understandable, but his loss!

After a barrage of complaints, Siren Pictures and Netflix are editing the phone number out of the scenes — though it will still be shown in trailers on YouTube. It also begs the question why the show would use a real number to begin with. In the U.S., the number “555” has been reserved for use by Hollywood — is there not an equivalent in Korea? Apparently, the Korean Film Council restricts how phone numbers can be used in films, but not TV shows — making anyone’s number fair game.

If you haven’t watched Squid Game yet, watch the trailer, below. Just don’t call anyone.