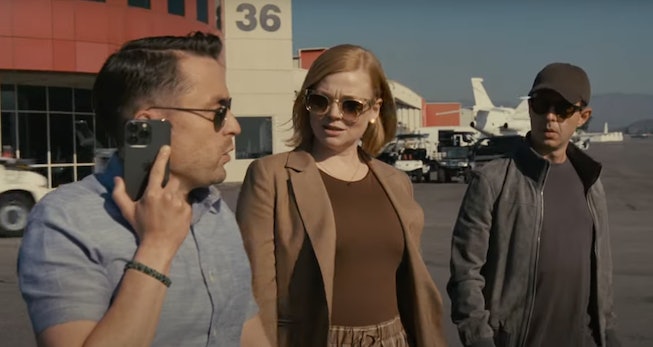 Our favorite family of out-of-touch billionaires will soon return, with all their sexual depravities, penchant for schemes, closed door meetings, and delusional PR campaigns. Succession is, as a surprise to nobody, coming back for a fourth season, after the seismic success of Season 3, which earned them a staggering 25 Emmy nominations, the most of any show.

The series follows the billionaire Roy family, who control media conglomerate Waystar Royco, and their various power struggles within the company and the family. It’s dark comedy satire and high drama, like Shakespeare in the board room, only with helipads, yachts, backstabbing, Twitter followers, sexual abuse scandals, corporate whistleblowing, ego death, and public humiliation after humiliation — and it’s perfect. The end of Season 3 left Waystar Royco in a particularly tough spot, with tech CEO Lukas Matsson (Alexander Skarsgård) vigorously trying to take the company, and the Roy kids fighting for a piece of it, culminating in a delicious twist of a season finale that we won’t reveal here.

Luckily we won’t have to wait long for fresh Succession: The Roys will return to our screen on March 26. In the meantime, watch the trailer and read on for more details about Season 4.

According to the official synopsis for the fourth season, which was released in June, the sale of Waystar Royco to tech visionary Lukas Matsson (Alexander Skarsgård) becomes more imminent.

“The sale of media conglomerate Waystar Royco to tech visionary Lukas Matsson (Alexander Skarsgård) moves ever closer,” the logline reads. “The prospect of this seismic sale provokes existential angst and familial division among the Roys as they anticipate what their lives will look like once the deal is complete. A power struggle ensues as the family weighs up a future where their cultural and political weight is severely curtailed.”

Yes, Cousin Greg is coming back

Season 4 will include all the leads of the ensemble cast, including the entire Roy clan and their current and ex-love interests, plus scheming Tom, depraved Gerri, all the Waystar cronies like Frank, Karl, Hugo, Kerry, and Cyd Peach.

There will be nine additional returning cast members

In what’s becoming a cast larger than the entire capacity of the executive suite at Waystar Royco, nine castmembers, outside of the core leads, are set to return, including Skarsgård, Arian Moayed at Kendall’s chaotic rich friend Stewy, Juliana Canfield as Kendall’s patient and skeptical assistant Jess, Annabelle Dexter-Jones as Kendall’s fellow media heiress sometimes girlfriend Naomi Pierce; Hope Davis as another media heiress, and Cherry Jones as the matriarch of that family. We’re not sure yet if Dasha Nekrasova is coming back as Kendall’s eye-rolling publicist.

The script was being finalized in May

It’s unclear when Succession Season 4 will air, but creator Jesse Armstrong told Digital Spy at the BAFTA TV Awards in May that the writers were almost finished with the script. “We're almost done with the writing for season four, here in London, with the American writers coming over,” he said. “They're a really great group of people to talk about the nuances of character and the world and what we're doing on the show."

NEXT UP
Culture
The Biggest Revelations From The Price Of Glee Docuseries
Culture
6 Shows To Binge Once You've Finished 'The White Lotus'
Culture
Angelus Turns 25: The Devastating Twist That Changed Buffy The Vampire Slayer & TV Forever
Culture
Caroline Polachek In KNWLS & More Party Photos You Missed
Style + Culture, delivered straight to your inbox.

This article was originally published on Aug. 25, 2022