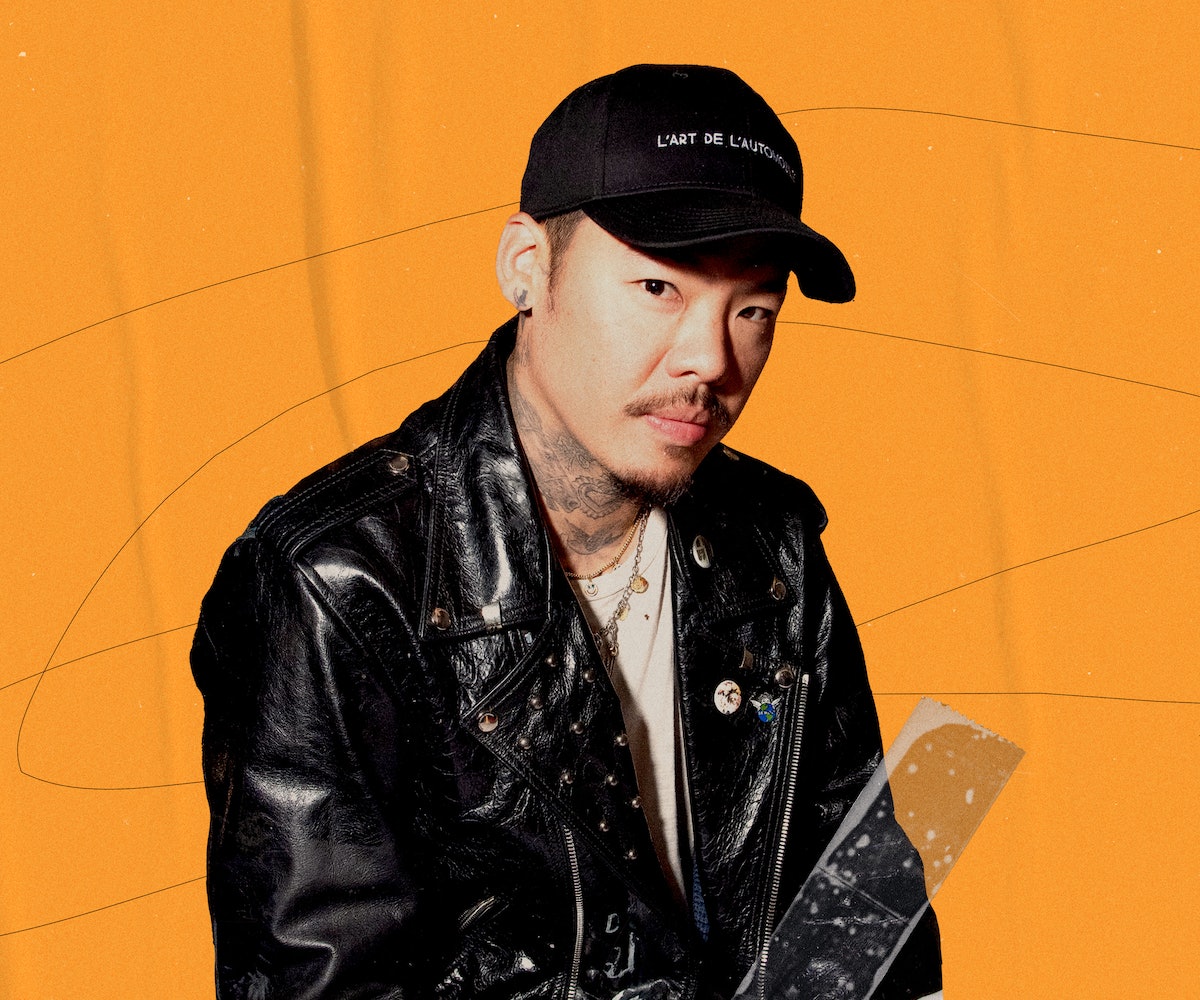 Everybody wants a piece of — and a piece from — Brian Woo aka Dr. Woo, the renowned tattoo artist whose intricate, fine-line designs have been sought out by superstars (Zoë Kravitz, Hailey Bieber, Drake) and top brands (Converse, Lamborghini) alike. After getting his start apprenticing for tattoo legend Mark Mahoney, Woo opened up his studio Hideaway, at Suite X in The Hollywood Roosevelt Hotel, in 2017 and launched his own line of skin care products in 2020. The latest piece of his empire? Partnering with D’Usse XO for a limited-edition glassware set featuring etchings of his designs that launches Dec. 3. “They have a bit of a modern approach to their branding and their ideals, but they’re still very much rooted in a traditional way of making things,” Woo says of the collaboration. “And that’s what I like: one foot in the past paying homage and one foot stepping toward the future.” Below, he answers NYLON’s burning questions about working with A-listers and what it takes to become a lasting name in the tattoo world.

Getting into the studio is the same for all my clients. It’s usually a mutual friend or a referral just putting in a request when I’m around. The slots now are very few and far between just because I travel so much or I’m working on other creative projects. So when I’m home, I try to get in as many people as I can. Some of those are part of that A-list circle, and some are also just my regular clients — my assistant helps divvy up those spots.

Some are very grateful just for the opportunity, and there are some that like to pull the fame card. I tend to appreciate people who aren’t too pushy and entitled. But it’s L.A., so that’s a bit difficult at times. Sometimes the A-listers are less entitled than people that aren’t. I hate using that word: famous. Everybody’s famous in L.A.

People never just show up without an appointment — my studio’s very private, so to even get access to it, you’re going to have to jump through a couple hoops. They’re punctual sometimes. At this point, I’ve been around long enough that nobody uses fake names. The network’s pretty deep, so people can reach out, and we’ll end up having a mutual connection. There’s no need for anonymity. Sometimes I don’t even know who they are: One time, someone came in, and after they left, my assistant was saying what a big fan of theirs they were, and I had no idea. It was a friend who referred them, so I didn’t even ask. It was just like, “Oh, it’s your friend. For sure we’ll try to help them out.”

Demand picks up during your typical awards season: the Oscars, the Grammys. Or Coachella — any influx or gathering that usually has everyone flying in. It’s nothing specific for the event; they’re just in town. Some artists travel for clients, but I don’t like doing that, so I always, always prefer they come to the studio. I don’t think I can do the best work when I’m not in my environment. But if it has to be that way, then we have a little travel kit and just make it work with what we have. If I do projects in Paris or Japan, where I can have a little pop-up situation, I’ll fly all my equipment out and try to recreate the same environment that I work in at home. But I’d rather avoid stressful, anxiety-filled situations. I’ve learned along the path that it’s easier to not make that money and have peace of mind than to have that money and go crazy.

People might think A-listers are more difficult once they’re in the studio, but it’s literally the same. There could be a neighbor next door that is more picky and annoying and niche than someone who is used to people going out of their way to make things happen for them. If I was blindfolded and didn’t know anyone’s background, it’d still be pretty even across the board. I’ve developed a lot of friendships with clients because we just realize, “Oh, we’re into the same things.” If you really click and you get along with someone, you let them in. And then there’s some people where they can say one word and we can both look at each other and know that there’s no conversation happening. There’s some people that you appreciate as clients but aren’t someone you want to go get a beer with after work.

I don’t share every tattoo on Instagram, and I don’t tag every single person, whether they’re famous or not. It’s not even that I like one more than the others; it’s just the story or the mood or the aesthetic. If I post too much of one kind of thing, then I’ll try to post something else to have a bit of variety. It never really comes up in conversation — sometimes I feel like it’s OK, and sometimes I don’t. I don’t even ask.

Obviously, any extra eyes a client brings you afterward is helpful, but I think that the attention span for everyone on social media is so fast that I really don’t even think it matters anymore. So I think clinging onto the fumes of fame in the end is not something that builds your brand as much. People are obsessed with the cult of celebrity and want a piece of that for themselves. So if there’s something that a celebrity can do that they can also do, then it’s easy to mimic. But if you build your brand around that, then that’s what you’ll always be. It’s up to you to sustain that with a quality product.

For me, I developed a certain style — I’m known for a certain thing in that world, and then that thing attracted a certain clientele. I rarely have people come in and say, “I want this because so-and-so got this!” or because it’s hard to get an appointment. I’m very grateful that people want my tattoos, very humbled that people want to get my work, and I recognize that it’s not because of something that happened over night. It’s a lot of hours and years of hard work.