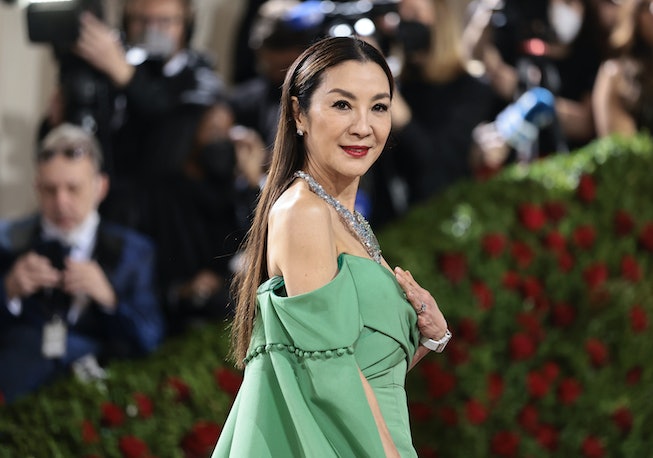 Maybe Michelle Yeoh first won your heart for her performance in Crouching Tiger, Hidden Dragon, or her glam role in the Bond film Tomorrow Never Dies. Most recently, she left our jaws hanging open in the metaphysical action-comedy Everything, Everywhere, All At Once, alongside Jamie Lee Curtis. Maybe you’re preparing for her to win your heart all over again in the upcoming Star Trek: Discovery spinoff, Section 31, where she will reprise her role of Captain Philippa Georgiou.

Now, the icon is going to be gracing the streaming services, starring in an upcoming Netflix show The Brothers Sun. According to Deadline, the dark, comedic drama follows Charles Sun, a Taipei gangster who’s become a ruthless killer. When his father is shot by a mysterious assassin, Charles must go to L.A. to protect his mother and younger brother Bruce, who came to the U.S. as a kid and has no idea of his family’s past. Yeoh will play Mama Sun, a shrewd and protective mother who moved her son to LA to escape the gangster lifestyle.

The eight-part series will take place between the chic locales of L.A. and Taiwan and will have an all-Asian writers room, with plans for an all-Asian cast. There’s not a release date yet, but here’s everything else we know so far about The Brothers Sun.

Alongside Yeoh, it features a lot of familiar faces

Sam Song Li of Better Call Saul will play Bruce, the little brother who gets thrown into a world of gangsters he is wholly unprepared for. Highdee Kuan of Fear The Night plays an assistant DA and Joon Lee of Dates will play an aspiring gangster and Bruce’s childhood best friend. Comedian Jenny Yang, Disney Channel star Madison Hu, Parks and Rec’s Rodney To, and Alice Hewkin of Sex Education and Game of Thrones will also have recurring roles. Charles Sun will be played by Justin Chien, whose most notable credit currently is in the Snapchat series Two Sides: Unfaithful, though that is about to change.

Brad Falchuk, who signed an eight-figure overall deal with Netflix in 2019, via his Brad Falchuk Teley-vision banner, will serve as showrunner and executive producer of the series. Falchuck is the co-creator of Glee and American Horror Story, though we hope he’s keeping Ryan Murphy away from The Brothers Sun with a ten-foot pole. It will be written and executive-produced by newcomer Byron Wu.