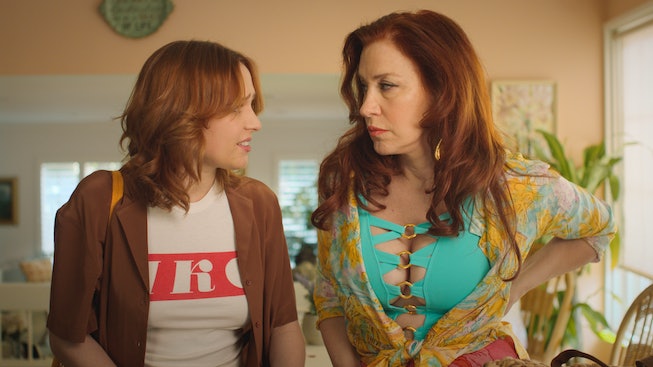 In the making of her short film The Ladies, Jill Gutowitz achieved two dreams: to make a film and for that film to blow up on lesbian Tumblr.

The deal was made all the sweeter by the fact that Gutowitz got to work with Lisa Ann Walter, who stars in the film alongside Alexis G. Zall. The Ladies, which premiered at OutFest, follows Emma (Zall), a gay girl living in Florida with her grandmother (Annie Korzen) and cousin (Jaren Lewison) in the wake of her grandfather’s passing. She begins an affair with her grandmother’s best friend Blanche (Lisa Ann Walter) that they try to hide from her family.

Gutowitz was inspired by a trip she took to Florida to stay with her grandmother when her grandfather passed away, when she was flailing romantically and career-wise. Unfortunately, she did not have an affair. “Emma and Blanche are two queer people who find each other in this space,” Gutowitz tells NYLON, “It’s like finding a person like you in a vacuum.”

In her book Girls Can Kiss Now, a lesbian pop culture guide released earlier this year, Gutowitz, writes about how, often in lesbian love stories, two women only ever get to yearn for each other, and either rarely or never consummate that attraction. But in The Ladies, the horniness is front and center: The film starts with Emma riding home on a scooter contemplating her romp the night before. Later, we see snapshots from a sultry photoshoot between her and Blanche.

“I believe this as a fan and critic and writer that it can’t just be about the yearning. It’s just sending the wrong message in general to queer people,” Gutowitz says. “They should consummate. Queer people should have joy and get to kiss and not just yearn.”

Gutowitz says she has a feature-length script for the story that she’s trying produce, along with producers Katie Schiller of Shiva Baby and Roger Mancusi, who produced the short. In the meantime, Walter’s iconic Parent Trap character Chessy is having a moment on lesbian TikTok, and Gutowitz is enjoying the onslaught of Walter devotees who are making memes from stills in the film.

“I knew that Lisa Ann Walter had sapphic fans, but I did not know the voracity of them and they have been memeing and gif-ing all this stuff from my short, which has been weird and funny to see. To have a GIF from a short that I made make it on Sapphic Tumblr, there is no greatest honor,” Gutowitz says. “If the feature never gets made, at least Lisa Ann Walter in this role is on Sapphic Tumblr.”