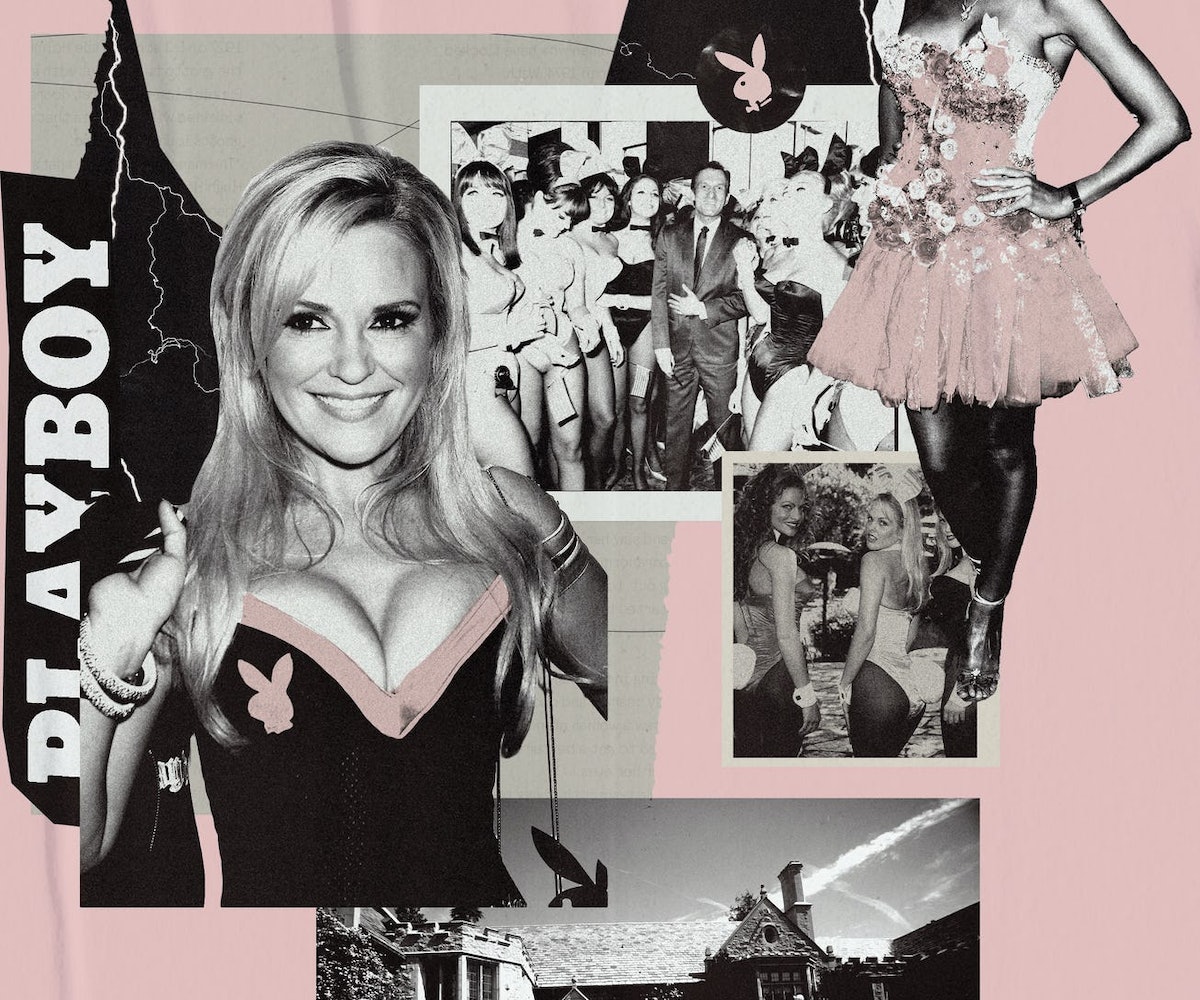 Playboy was meant to empower women. The ubiquitous bunny logo was intended to be a symbol of sexual liberation, with Playboy’s founder Hugh Hefner positioning himself as a staunch advocate of free speech and freer love. But the same brand that purported to give women power ended up destroying many of them.

A new, 10-part A&E docuseries from filmmaker Alexandra Dean — who also made the Paris Hilton documentary This Is Paris — begins to excavate the dark secrets of Playboy, uncovering a deep well of horrific abuse and coercion. (You can read NYLON’s interview with Dean here.)

“It was a beautiful world to him: beautiful girls, beautiful people, beautiful food, everything,” says Hefner’s former girlfriend Sondra Theodore in the series’ first episode. “It looked that way, but it was ugly. It was really ugly.”

Dean interviewed more than 100 people, mainly women, who had been connected to Playboy over the last 60 years and uncovered the underbelly of a culture that, even if it afforded some women careers and sexual liberation, ruined others. It’s a documentary that could only be made in the wake of Hefner’s death, when many women finally feel safe talking about what happened behind the brand’s seductive, glamorous facade.

“I hope this documentary changes the legacy of Playboy. I think it’s time for this reckoning. I think Playboy has to be reevaluated,” Dean tells NYLON. “And you know what I really hope? That there’s a generation that sees this and feels like they can find another way to sexual freedom where they hold the reins of power for themselves and nobody else is debating what that looks like for them.”

The allegations in the documentary are so horrific that they are sure to reframe the legacy of Playboy. The company has already responded to the documentary, reiterating that it is no longer associated with the Hefner family, saying: “We trust and validate women and their stories, and we strongly support the individuals who have come forward to share their experiences. As a brand with sex positivity at its core, we believe safety, security and accountability are paramount, and anything less is inexcusable.” The statement continued: “We will continue to confront any parts of our legacy that do not reflect our values today, and to build upon the progress we have made as we evolve as a company so we can drive positive change for you and our communities.”

Below are some of the most disturbing allegations detailed in the documentary.

Secrets of Playboy airs on A&E on Monday nights at 9pm.

Hefner’s former girlfriends and The Girls Next Door stars Bridget Marquardt and Holly Madison, who were both interviewed for the series, say they signed their contracts under duress. "I was in the shower and all of a sudden Hef is standing there. He opens up the shower door like, 'Why aren't you signing this contract? I need you to sign this contract," Marquardt said. "I signed the contract, crying and soaking wet." She added: “They made it very clear to us that if we didn't want to do it, there would be a million girls who would want to take our place.” Madison explained she was initially hesitant to sign because she felt it was "a contract to be in a relationship" with Hefner. "That felt very prostitute-ish to me," said Madison.

Madison also detailed her experience in the Playboy mansion, where she lived for eight years because of “Stockholm Syndrome.” On her first night there, she had a sexual experience that “humiliated her.” Madison, who has Asperger's, said making friends was always difficult for her, and that a large reason she stayed was because she had a fantasy of the women in the mansion being like sorority sisters. But there was nothing fun about it: Madison said they all would go out to clubs on Wednesdays and Fridays and sex was always expected upon their return. Hefner later made her quit her job, didn’t allow her to have friends, and was furious when she tried to do anything to assert her independence, like cut her hair.

Multiple women in Playboy told stories of being drugged in the mansion and at Playboy parties. Hefner apparently had a drawer full of quaaludes in his bedroom that he had to chew because he never learned to swallow pills. One woman alleged that even his dog was addicted to cocaine. What’s even more disturbing are allegations around Hefner’s use of Playmates as drug mules and the mysterious, sudden deaths of the women linked to the drug operation.

Women in Playboy experienced high rates of substance abuse, depression, drug overdoses, and suicide. One Playmate committed suicide in the carriage house at the mansion, writing “Hugh Hefner is the devil” across a mural of magazine pages.

There are countless accusations of rape and physical abuse

Women detail sexual and physical assaults by Hefner and his associates, including close celebrity friends like Bill Cosby, Roman Polanski, Tony Curtis, and Jim Brown, who one woman said “cracked ribs and broke jaws.” Assaults didn’t only happen in the mansion, but at Playboy parties, in Playboy corporate offices, in the Playboy clubs, and during Playboy promotional events.

Jennifer Saginor, daughter of Hefner’s best friend and alleged lover Marc Saginor, who was the doctor in the Playboy mansion (where Jennifer Saginor grew up), says she was pressured to get plastic surgery when she was 15 years old. Marc Saginor encouraged women to get breast augmentations, and told one woman that using crack cocaine would help her asthma. "The plastic surgery amongst the girlfriends in the mansion was compulsive, everybody was doing it with very few exceptions," Madison said.

Hefner’s valet Stefan Tetenbaum revealed he ate two to three pounds of M&Ms per day, along with drinking 35-40 daily cans of Pepsi, and mandated that they all be handed to him wrapped in a red napkin. Condoms had to be stacked in a certain place in the headboard at all times. Sex toys were cleaned daily. “There were 150 rules. We had to follow them exactly,” said Tetenbaum. Hef did not allow the staff to talk to Playmates, and refused to learn the names of his own valets.

In the 1980s, there was a network of shadow mansions

Men in Hefer’s inner circle would try to emulate what Hefner had created and would lure women who didn’t get picked for the magazine to parties, where they would promise them they’d meet with men who could get them modeling contracts. There, men would set up fake photo and video shoots to capture the women nude. One woman described it as “predatory movement,” a kind of underground system where they’d lure in the most vulnerable women.

There’s a trove of sex tapes from Hefner’s bedroom

Former Bunny mother PJ Masten and Theodore allege that Hefner taped all of the sex that went on in his bedroom — whether he participated in it or just watched — to use as “collateral.” Hefner’s butler claimed that he kept the tapes in a library in his office down the hall from the bedroom, which was off limits to everyone except him and longtime executive secretary Mary O'Connor. If you were caught going near it, you’d be terminated immediately, a former butler said. Later, when some of the former Playmates tried to investigate what happened to the tapes, former executive assistant Lisa Loving Barrett said they were put in a barrel and taken to sea.

In the end, many women in Playboy have found each other

Playmate Miki Garcia and Theodore became friends after finding each other in 2011. In 2016, Masten asked Garcia to partner with her — it was the first time all their worlds collided. Many of the other women have found each other through the Iconic Women of Playboy Facebook group. The reunion is especially powerful because Hefner intentionally created a structure where women were isolated from each other and afraid to share what was really going on.

“I hope that some women watch this and they feel like it means they can also share their stories,” Dean told NYLON. “Because I know there’s a lot more that happened at Playboy than even I uncovered and I hope women start to have real conversations with each other about it, and I hope that it changes things for them.”