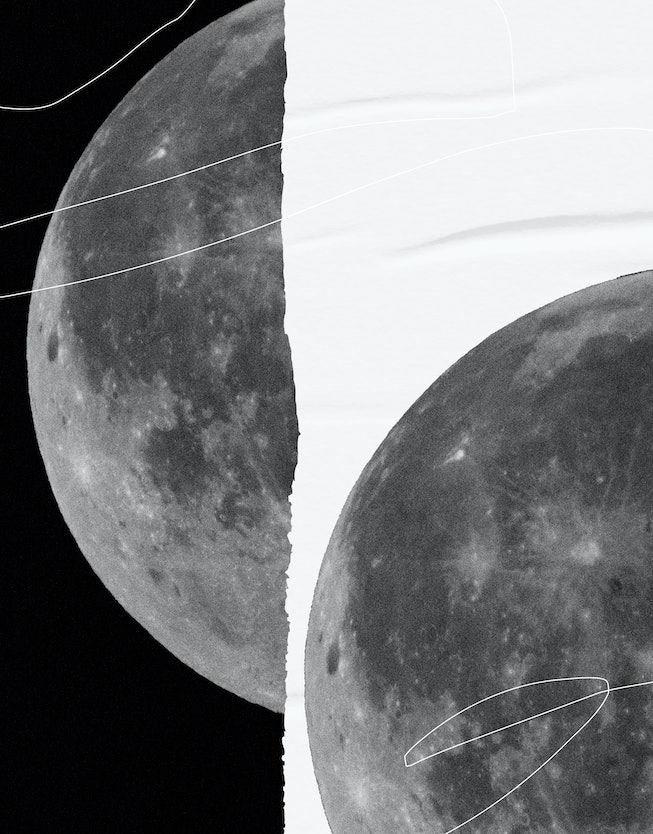 For most people, it's not very intuitive to be still. Those of us raised in a culture that prizes productivity generally have a harder time of it. Stillness can, to the unaccustomed, look a lot like idleness. And, while there is nothing inherently wrong with idleness, it's likely that at some point in our lives we were told that to idle is to indulge in laziness, or to be ungrateful or without purpose. Yet those of us who meditate, who take our time, who watch the butterflies and the bees know better. There is nothing alive that is without purpose. There is nothing you can do that isn't active — you are breathing, and standing still is a choice that impacts all choices that come after.

Taurus knows this about stillness. Taurus uses their strong inner compass to set their sight on a destination, and their first step is to collect their energy. With great and steady force, they make their way. When the path before them is dark, the dark of a new moon night, they still themselves and let their eyes adjust to a different kind of light. The new moon in Taurus, we are called to stand still in the new dark, to collect our restlessness until our bodies thrum with it, to let our visions adjust to the reality before we start to move.

Everyone knows that Taurus is always right even when they're wrong. A part of that has got to do with the will they exert over others, and a part of that has got to do with their will to change in the face of a Very Good Reason. Much like their commitments to people, places, and material objects, Taurus takes a long time forming their opinion because they are interested in making the best and most informed choice. The time they take getting into it, whatever it is, is generally the amount of time it takes for them to get out. So, while it may seem as if they're not budging, they are. No matter their stubbornness, Taurus is interested in bettering themselves, in growth. In Taurus season, change comes on slowly and then it arrives all at once, like spring seedlings appearing from perennial seeds planted the fall before — peonies, poppies, lupines, and irises. The dark wet earth, like the dark new moon night, is a fertile place, a place of beginnings.

This month, our dark moon of possibilities forms a conjunction to Uranus and a square to Saturn. Uranus is our planet of freedom, of rebellion, of upheaval, and it rules Aquarius, the sign of the collective dream, of activism, and the internet. Uranus yearns to do things differently for the sake of collective evolution and the shadow of that yearning drapes itself over the heart of our new moon. Amid great national and world crisis, we are asked to see our place in the world differently and to shift our value systems. Our value systems, our social structure, our public ethos and its praxis are represented by Saturn which, of course, is in Aquarius. Squares are a tense aspect, and with Saturn in Aquarius squaring our new moon conjunct Uranus in Taurus, the world we are beginning to envision for ourselves is a world that reminds us of our limitations. These limitations take the form of enforced quarantine and a government that prioritizes the interests of billionaires over public welfare and the needs of our first responders. These limitations take the form of a cultural fear of grief and accountability so huge that its people are called to perform normalcy in the face of complete routine dysregulation and mass death. And, with Mercury in Aries in the mix, this cultural fear, this sense of powerlessness, is evoking protest and rebellion in the most individualistic form: the protesting of these limitations in the name of personal freedom.

Of course, there are other ways these forces can work, and they do. Every poet knows that restraint can be a tool, an opportunity to approach your subject matter from a new angle, a chance to ascertain what is most essential to the work, and a formula for breaking rules more beautifully. A Taurus new moon is all about breaking rules beautifully and in the interest of being better. In the dark of that moon's night, for those of us who use our eyes to see, our eyes adapt — pupils widening to collect whatever light bounces off rigid structures and reflections. For those of us who encounter the world by sound, spring's darkness is rich with life. Birds that migrate north fly at night calling to each other. Some are so adept at conserving their energy while moving that they can let half their brain sleep while they fly with their other half: unihemispheric sleep. Some birds, like Mockingbirds, sing out in the darkness for their mates. Restraint, reimagined, teaches us how to move with precision toward our meaning. To act with impact in a wholly new way.