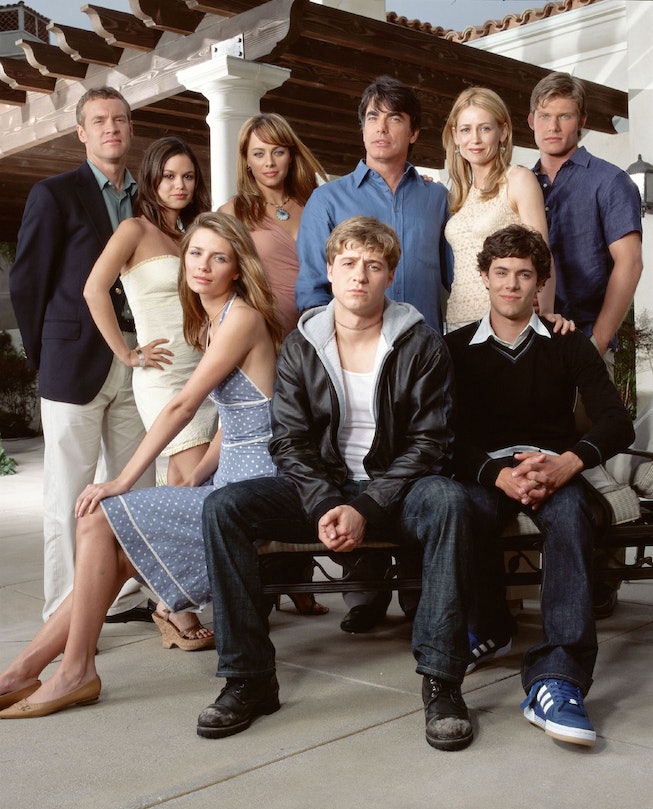 Fortunately, Seth isn’t the only man on The O.C., just the most talked-about. But there’s a lot of richies walking the Newport boardwalk wreaking havoc on the hearts of the women who live there — from moral compass of the universe with incredible eyebrows Sandy Cohen to dark horse screwup Jimmy Cooper — a character who Bilson told NYLON she has a crush on. Bilson also said she’d be open to doing a reboot (!) — and while there are no official talks of this happening, in the meantime we can set the record straight on the ranking of all the men of Newport Beach. Seth fans: Sorry in advance.

This story contains spoilers for The O.C.

He’s an excellent brand of dirty, hot bad boy, but at the end of the day he is the reason Marissa dies. End of story.

While it’s kind of hot that he and Marissa met in a therapist’s waiting room, my blood pressure rises when I think about this scary dude, who literally holds Marissa hostage in his penthouse hotel room, threatening to shoot himself if she leaves. Marissa’s savior complex really gets the best of her with this one! Sorry if you can relate.

Caleb is a supervillain with zero redeeming qualities, except that he refuses to date anyone who isn’t super hot, which I can only respect. The King of Newport, Caleb is like Mr. Monopoly moneybags, doing whatever he can to secure cash and power, which, in Newport, means destroying coastal wetlands and throwing charity events on yachts. Also, can we talk about how he blackmails Marissa into living with him and Julie at his big age? Please, get a life!

This clown! He grows up super rich, is handed a financial advisor job, squanders all of his and Newport’s money, and then has the gall to blame Julie Cooper — when he could have had a spine and said no to buying her and his family ponies and designer bags. He then proceeds to go full midlife crisis, kisses Kirsten, gets punched at Marissa’s cotillion, and then moves on a boat with Kirsten’s 23-year-old sister, all before abandoning Marissa with Julie and Caleb to move to Hawaii.

Luke actually has one of the bigger character arcs of the show, going from the fist-throwing official greeter of Newport Beach (“Welcome to the O.C., b*tch!”), to a low-key sailing instructor living in Portland with his gay dad and harboring Seth for the summer. But that doesn’t make up for the fact that he cheated on Marissa with Holly and also hooked up with her mom!

It’s painful to give this little cutie such a low score, but Seth is an indisputably bad boyfriend. The fact that he’s been obsessed with Summer since kindergarten is weird, not cute. He’s never talked to her and named his boat after her?! Then, he gives a crash course in unethical non-monogamy, dating Anna and Summer at the same time without them knowing. Once he finally gets Summer to date him, he abandons her to move to Portland with Luke. He might be our greatest TV crush of all time, but he’s also a spoiled, only child narcissist — one who just happens to have great music taste and rock a sweater vest.

Sure, he can be a bit of a loose cannon and lets Marissa’s conversations with other dudes throw him into a jealous spiral — but at least Ryan has a reason for his abandonment trauma! This man is doing the work of healing his inner child, while navigating his newfound life amidst the One Percent, all with only 7-10 white tank tops on his back.

Marissa definitely didn’t deserve D.J., whom she referred to as “the yard guy,” all summer, but that man might be Newport’s most eligible bachelor. He’s super hot, mows the lawn shirtless, and is only ever super nice to Marissa. We like to think of an alternate universe O.C., where she dates D.J. because he’s good for her, not just to piss off Julie Cooper, and where they leave Newport together and live in L.A. and have a really nice lemon tree.

Self-assured, sweet, selfless — Zach is, in Summer’s words, “the anti-Cohen.” We all know Summer wanted to like Zach and gave it her best shot, but the heart wants what the heart wants, even if that’s Seth Cohen. It happens! At least Zach gets to leave Newport to go work on a comic with George Lucas.

Show me a better man than Sanford Cohen. A public defender raised by a single mom in the Bronx who married the princess of Newport, Sandy constantly questions his privilege and is on a lifelong quest to right the wrongs of the world, even if it is from an ivory tower. He can also slice a mean bagel, has show-stopping eyebrows, and, wait for it, sings “Don’t Give Up on Me” to Kirsten for a crowd at the bait shop. We should all be so lucky!