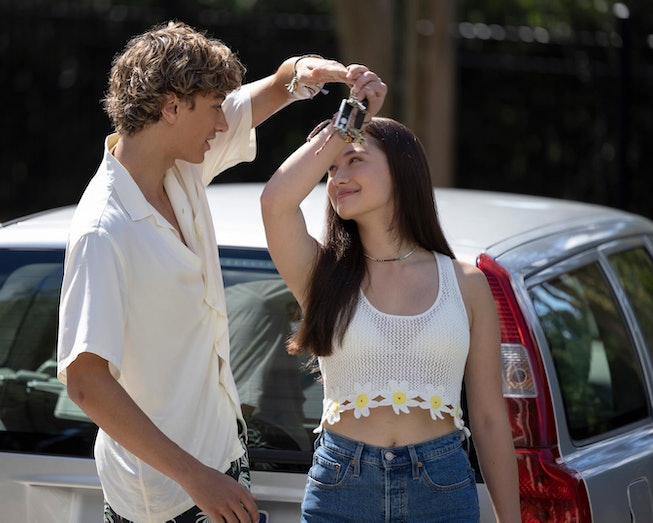 To All The Boys I’ve Loved Before is the coming-of-age high school movie I wish I had as a teenager. It captures the sweet awkwardness of adolescence through a headstrong character who you want to be in a way that’s relatable, not aspirational. Now, another novel by Jenny Han, who wrote the book upon which the movie was based, is getting adapted, this time into a series for Amazon. The Summer I Turned Pretty — a coming-of-age story for a time of year that’s notoriously wacky — will premiere on Prime Video on June 17.

The teaser trailer for the film was released on May 5, and it’s set to what else but Taylor Swift’s unreleased 1989 re-recording of “This Love (Taylor’s Version),” the perfect accompaniment to a drama about early relationship woes. “I thought the summer was going to be like all the other summers,” says main character Belly, played by Lola Tung. “But it’s not. Because I won’t let it be.” We then see a montage of cute boys throwing her into a pool, at least one makeover scene and at least one Notebook-esque scene that involves her and said cute boy pushing each other into the ocean.

According to Deadline, the series is a “multigenerational drama,” about “the ever-evolving relationship between mothers and their children, and the enduring power of strong female friendship.” Per Collider, the story’s protagonist Belly goes on a yearly vacation to her family’s beach house, where she reunites with her friends Susannah and brothers Jeremiah and Conrad, who used to be her best friends but whom she now finds herself attracted to. She ends up getting dragged in a sort of love triangle with Jeremiah and Conrad and must decide who she likes more. The summary continues: “It is a coming-of-age story about first love, first heartbreak, and the magic of that one perfect summer.”

The Summer I Turned Pretty is a title that will undoubtedly fuel the antics of thousands of girls on TikTok waiting with bated breath for another so-called “hot girl summer,” but it also feels like it’s going to give us Gilmore Girls and Parenthood-level mother-daughter feelings? Down!

Han wrote the pilot and will serve as showrunner with Gabrielle Stanton, who’s best known for her work on Grey’s Anatomy and Ugly Betty. It stars newcomer Lola Tung, Jackie Chung, Rachel Blanchard of the TV adaptation of Clueless, and Tom Everett Scott of That Thing You Do!

And even though it’s still months from being released, if the series does well, it seems likely it will be renewed: The Summer I Turned Pretty is the first of a trilogy, which follows a girl’s coming-of-age story during her summer breaks. The second two books in the series are titled It's Not Summer Without You, and We'll Always Have Summer.

The series is the first of Han’s newly-signed television and film deal with Amazon Studios in which she will exclusively create, develop and produce additional projects for the streaming platform. XO Kitty, a 10-episode series spinoff of To All The Boys I’ve Loved Before centered around Lara Jean’s sister Katherine is also in the works for Netflix.

NEXT UP
Culture
Succession Season 4 Trailer Explodes With Family Drama
Culture
Phoebe Dynevor Will Not Return for Bridgerton Season 3
Culture
The Biggest Revelations From The Price Of Glee Docuseries
Culture
11 Must-Read February 2023 Books
Style + Culture, delivered straight to your inbox.