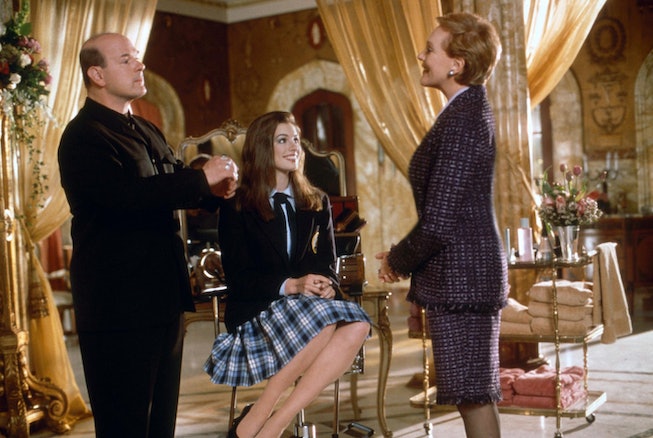 It’s been 21 years since The Princess Diaries hit theaters, and there’s something that still holds up about the tale of surprise nepo baby Mia Thermopolis (that’s Amelia Mignonette Thermopolis Renaldi, royally), the nerdy San Francisco teen whose single mother-raised bohemian lifestyle is upended when she finds out she’s heir to the Genovian throne.

In 2004, we were once again graced with the presence of Julie Andrews as Queen Clarisse Rinaldi and Anne Hathaway as Thermopolis in the film’s sequel Princess Diaries 2: Royal Engagement, which doesn’t conjure any images besides Hathaway and Raven-Symone mattress surf down the castle’s grand staircase. Now, against all odds, a third Princess Diaries film is in the works. But as the original film’s theme song “Miracles Happen” by Myra goes: “Miracles happen/ Once in a while/ When you believe.”

Anne Hathaway is not contractually obligated to sign on to the project, but she has publicly expressed support and has hinted that she would be involved. And speaking of miracles, she’s pulling to get Andrews to return.

“I would more than entertain it, I’m pulling for it,” Hathaway recently told Entertainment Tonight. “If there’s any way to get Julie Andrews involved, I think we would make it work. We would go to where she was and put a green screen behind her and just make it happen." (Now that’s the A24 film we need.)

It’s unclear who from the original Princess Diaries crew will be involved. Debra Martin Chase, who produced the first two films, is returning as a producer, while Supergirl, Reacher and Quantum Leap writer Aadrita Mukerji is working on a script. Personally, I’m pulling for Mandy Moore to reprise her role as evil cheerleader Lana (“Lana got coned!”), Sandra Oh to come back as Principal Gupta, Paolo to return as the slightly problematic makeup artist to teach me more about eyebrows (“I love your eyebrows. We’ll call them Frida and Kahlo”), and more importantly: for Robert Coppola Schwartzman to ditch Rooney and return as Michael, the unlikely hearthrob who “fixes cars, play guitar, and he can sing.”

We know no plot details at this time, but if the film continued along the same universe timeline, Mia Thermopolois would now be 37 years old, about a decade too late for a Saturn Return storyline and just too early for a mid-life crisis plot. A royal baby perhaps?

NEXT UP
Culture
Spice Girls May Reunite For King Charles’ Coronation
Culture
Loewe’s Howl's Moving Castle Collection Is An Anime Dream
Culture
The Cutest Couples At The 2023 Grammys
Fashion
Jenna Ortega Is The Face Of Adidas’ Newest Line
Style + Culture, delivered straight to your inbox.