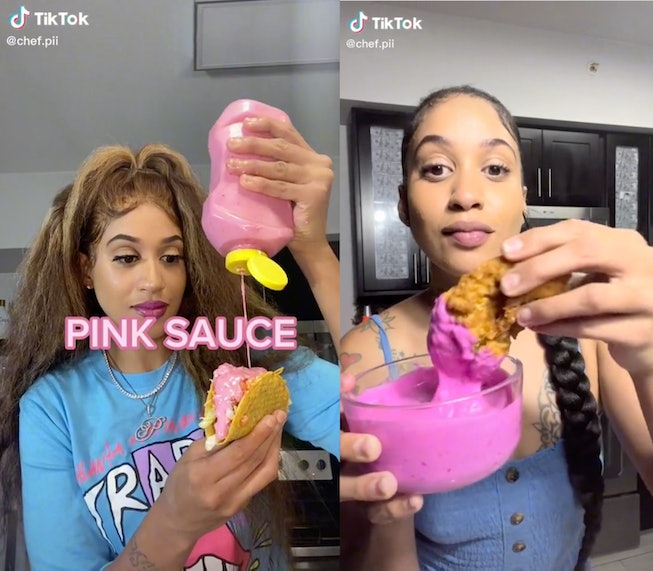 The world is burning, so it makes sense that everyone wants their sauces to be pink and their cereal milk to be sparkly. Right now, the internet is ablaze with hype over a pink sauce that’s become wildly popular on TikTok, after the user Chef Pii (@chef.pii) started slinging the stuff to users last month — but not because it tastes good.

Instead, a controversy around the sauce has emerged, fueled by many unanswered questions, like, for example, what’s in it? For a founder, Chef Pii is incredibly cryptic about the pink sauce, refusing to tell customers what it tastes like, but nevertheless selling it for a whopping $20 per bottle. After weeks of questions from users, Chef Pii finally revealed the ingredients in the pink sauce, which is the color of Pepto Bismol and comes in a plastic tube with only the words “pink sauce” in light pink block lettering. It contains dragon fruit, sunflower seed oil, honey, garlic, and chili flakes, an exact number of sweet and savory ingredients, making the taste difficult to conjure.

Like many controversies, this is one where we have more questions than answers. Below is everything we know about the pink sauce TikTok fiasco.

When and how did this all begin?

The first video of Chef Pii eating pink sauces is from June 2022, where you can see her dip a chicken tender into a pyrex of pinkish-purply sauce. Off the bat, most of the comments from users are wary, with responses ranging from: “The fact they they never describe the flavor 🚩🚩🚩🚩” to “I’ve always wanted teletubby custard.”

Over the following weeks, Chef Pii posts several videos of people (and a lot of children) trying the sauce in real-time. One tester describes it as “sweet and savory,” and “well-seasoned,” but commenters continue to point out that she won’t reveal what’s in the sauce.

In mid-June in response to users’ questions about what makes the sauce pink, Chef Pii posted a video assuring “it is 100% naturally colored with no artificial additives,” before adding: “But I can’t tell you the ingredients I use to make it pink, but it’s pink.”

What else are people concerned about?

Users have raised questions about the color of the sauce changing dramatically, which Chef Pii chocked up to lighting, which users quickly debunked in the comments, writing things like: “when u first started it was extremely hot pink almost dark purple” or “but in the other video you said you changed the color cuz u weren’t happy on how dark it was.”

Other users have pointed out that the sauce has no nutrition facts and isn’t FDA approved, to which she says, “Right now we are doing quality testing to ensure that we get the best quality out to you guys to have minimum to no complaints.” Sounds promising enough!

Is anyone else involved in this drama?

Yes! TikTok watchdog @sseaansvv, whose bio is “i read the fine print” posted a video on Tuesday that’s since been viewed 7.4 million times, citing further concerns. “Ya’ll, I’m scared for the pink sauce lady right now,” they said, citing the nutrition label, which, for some reason, listed the bottle as having a serving size of 444 and doesn’t enough preservatives to keep it shelf stable. In the caption for a second video, @sseaansvv wrote, "I’m genuinely rooting for her to obtain a license, fix the labels, correct any errors and then sell out — legally".

One commenter said they heard Chef Pii stuck on the label with glitter glue, which @sseaansvv confirmed is a rumor.

What else has gone wrong with the pink sauce?

Basically everything. A shipment of 50 bottles was damaged earlier this week, yet another controversy Chef Pii has had to respond to. She apologized and promised to get another shipment of sauces out immediately, and said she was switching to using boxes instead of plastic wrap to ship the sauces — but that wasn’t before users had a chance to post their damaged goods on TikTok.

Has Chef Pii weighed in on any of the other controversies?

Yes. Yesterday, she posted a video apologizing for the incorrect nutrition label, and thanked fans for their support.

“My apologies. I’m only human,” she said, explaining that there are 444 grams of pink sauce in each container, not servings. “It was a mistake. We fixed the issue. We are replacing all of the labels. We also are sending you guys a gift and a thank you note. This is a small business ya’ll that is going really, really fast. We are working to try to get the price marked down on the pink sauce. I also want to say I appreciate ya’ll for supporting me.”

She also said that they are indeed following FDA standards and are currently in “lab testing,” after which they’ll be able to try to get the pink sauce in stores. To be fair, even big brands have had a hard time marketing unnaturally-colored food. Anyone else remember what a culinary setback purple ketchup was?

Anyway, here’s someone dousing a burrito bowl with the sauce, which for some reason, is so much more runny than you could ever imagine.