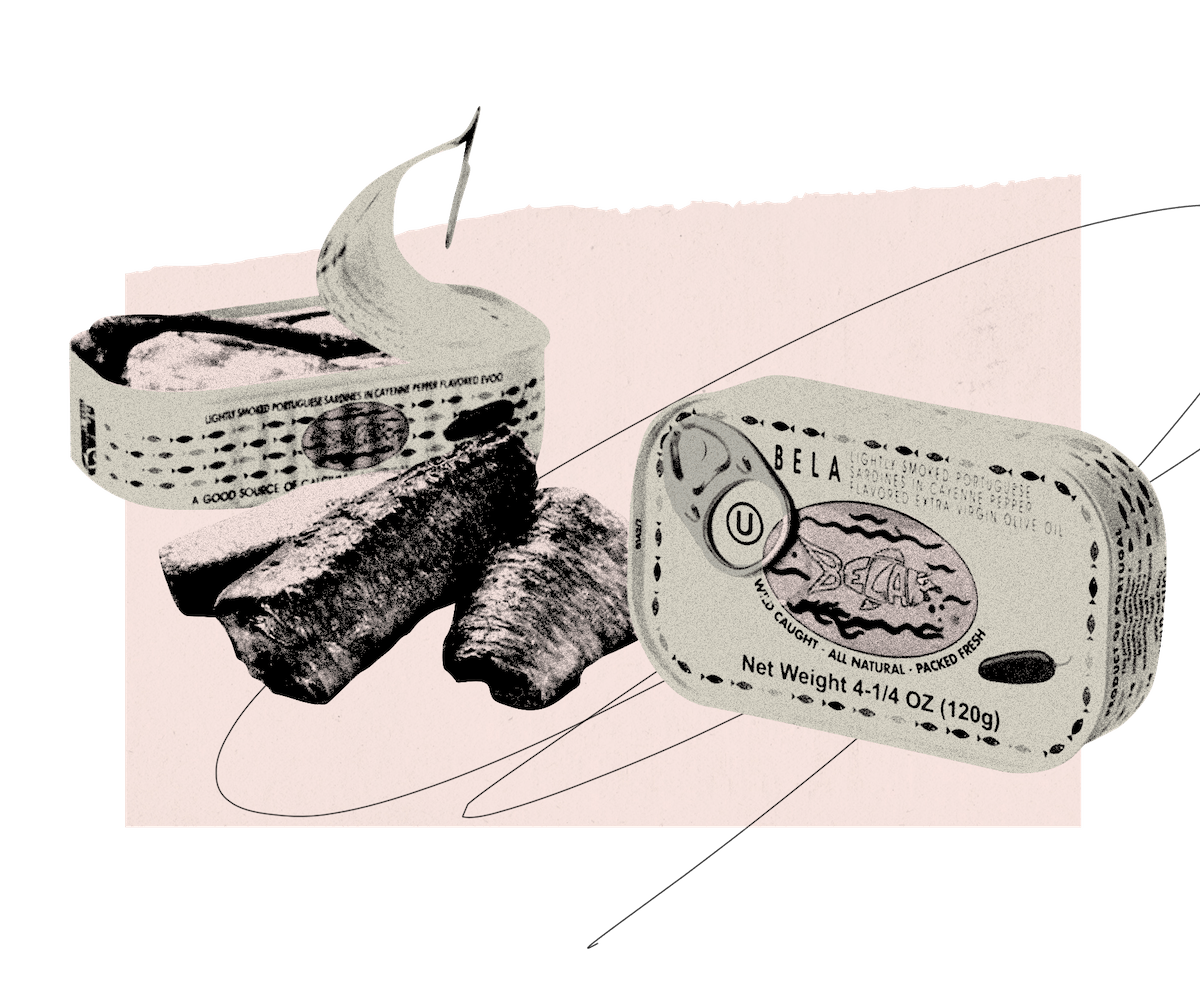 The unexpected snack of summer 2021 is shaping up to be little, briny dead fish bodies that smell like a barge and are stacked into tins. Tinned fish, once seen a less-than-ideal pizza topping, is rising to not just acceptance but prominence — led by online hotties who love to snack on and tweet about sardines, anchovies, and other types of fish, mollusks, and shellfish that are preserved and sold in cans.

People have been talking about how anchovies are actually good for a couple of years. I’ve been wrapping canned tuna in dried seaweed as a hangover snack for years, but like many, got into anchovies while quarantining during the pandemic, plucking fish out of a tin to use as the base of salty pastas and then pouring the rest on sourdough bread with sharp cheddar, a single lettuce leaf, and a drizzle of olive oil. This isn’t unique: The rise in popularity of tinned fish has more recently been fueled by the demand for shelf-stable foods during the pandemic, an increased number of people working from home in search of easy-to-prepare lunches, increasing concerns about sustainability, and an increase in pescetarian diets.

Caroline Goldfarb and Becca Millstein started Fishwife, a tinned fish company that sells high-quality, sustainably-sourced seafood in shamrock, bubblegum, and cerulean tins with loopy cursive, in what is an aesthetic that falls somewhere between a Glossier store and a Starbucks cup, last year. Goldfarb and Millstein quarantined together and found themselves eating tons of tinned fish during that time: throwing it in salads for protein, eating it straight out of the can, or putting it out for happy hour with natural wine. They got the idea to start the company when they couldn’t find tinned fish at the grocery store that was based in the United States and that marketed itself as being sustainably sourced — something that was important to Goldfarb and Millstein. Other newer tinned fish brands like Scout, Vital Choice, and even Patagonia are also marketed as sustainable. Now, Fishwife sells smoked rainbow trout and wild-caught smoked albacore tuna, with more types of fish planned.

“Tinned fish is the ultimate hot girl food,” says Goldfarb. “There is no food that will make you hotter than tinned fish. Straight up. Do you know a hot girl who doesn’t exist on protein? I don’t.” She adds that in addition to protein, tinned fish also has omega-3s, vitamin B, and calcium, of which a tin of sardines contains more than a glass of milk.

You can’t talk about the rise of tinned fish without talking about one embattled chef who has long-pedaled the wonders of tinned fish: writer and chef Alison Roman, whose very hyped shallot pasta requests 12 anchovy filets. Millstein and Goldfarb say Roman has certainly been one of the ambassadors of tinned fish, and that the appeal of tinned fish also speaks more broadly to a certain lifestyle people are trying to emulate, which falls somewhere between European tapas and a Jewish deli aesthetic.

“People want to embody that European ideal of minimalist, simple, casual elegance,” says Millstein, who adds the company was partly inspired by the culture that exists in Europe around tapas — something that’s been replicated with the rise of natural wine bars in the United States. “What is sexier than sitting on your veranda with a glass of wine and a toasty baguette and a glug of olive oil? It’s a very sensual eating experience.”

“[Tinned fish] is a totally apolitical topic. It doesn’t have anything to do with culture wars or anything like that. It’s something where all people can come together.” - Tim Marchman

There’s already a fandom around tinned fish — including an online museum dedicated to the Portuguese canning industry that showcases fish tin designs and labels, which often have bold type, vivid colors, and dazzling illustrations; blogs; an enthusiastic Reddit community; and most recently, a Substack newsletter.

Tim Marchman, an editor at Motherboard and self-described “tinned fish aficionado” started the newsletter Popping Tins in April, which is dedicated to reviewing different brands of tinned fish and also discusses issues like sustainability. The newsletter has more than 4,000 subscribers.

“[Tinned fish] is a totally apolitical topic. It doesn’t have anything to do with culture wars or anything like that. It’s something where all people can come together,” he says. “The reception has been 100% fantastic and fun. I’m going to be, like, a fish influencer.”

It may be the hot girl snack of the summer, but it’s a trend that’s poised to continue for much longer than the Juicy Couture tracksuit or butterfly clip comeback. Goldfarb and Millstein see tinned fish as something that’s more timeless, especially with the potential for people to use it as a convenient, shelf-stable protein that, thanks to the process of canning, contains few ingredients.

“That will be one of the big fun goals we hope to achieve over the next few years, making it approachable for people to replace getting fish at the market. They don’t have to worry about the protein for the meal; the most complex part has been taken care of,” says Millstein.

Goldfarb first learned to love tinned fish from her Iranian mom, who would often serve tinned sardines and tuna, and was shocked to learn that people considered tuna sandwiches to be stinky. “The staple has been around for hundreds of years and it’s been part of generations. All kinds of different cultures have their relationship with tinned fish, if you go to the Korean store or your local Chinese supermarket, they have their own amazing varieties that I highly recommend picking up and trying,” says Goldfarb. “It feels so different than other trends to me, because it’s so timeless and an important part of everyone’s pantry. To me, it’s beyond a trend — it’s an indelible part of food culture.”

While canning goes back a few hundred years, and canned fish has long been a delicacy in European culture, canned fish has long had a bad reputation in the United States, where we’re taught to hate anchovies and told not to bring fish for lunch at work. Now people everywhere are posting their tinned fish dinner spreads on Twitter — like the artist Petra Cortright, who posted a photo of her dinner that included tinned yellowfin tuna belly from Spain, with a sourdough baguette, butter, and sea salt.

“I have always really liked any hors d’oeuvre type of food. I think it’s so festive and classy and sophisticated and I’ve always really liked to eat that way,” she says, adding that she eats tinned fish to power her CrossFit workouts and as a snack while she’s painting. “It’s a small amount of food that’s very protein heavy and is good for your brain but doesn’t slow you down. I see almost no downsides to it.”

Goldfarb and Millstein say they hear from friends and customers who say, “I’ve been eating sardines for the past 10 years and don’t talk to anyone about it,” or “It’s so weird, but I actually eat tinned fish all the time,” like eating tinned fish is a gross secret.

Adria Ivanitsky, a musician in Portland, Oregon, used to think of tinned fish as a dad snack, but started eating canned sardines and oysters when she started surfing regularly and needed easy snacks to eat on the beach for energy. However, she’s used them most as a depression snack.

“I trained myself to like them because I had to find some way to get a bunch of protein at once when I was so depressed I couldn’t feed myself,” she wrote in an email. “I used to think they were nasty. Now I love them because they help me so much.”

Despite old-fashioned, preconceived American ideas around tinned fish, it’s a snack that’s really for everyone — from experienced chefs to people too lazy or tired to cook a meal to people who use it as part of the mise en scene of their happy hour spreads — that’s designed to last for years. It’s something we can always rely on. “I do find,” says Goldfarb, “that when people try it and are tinned fish-curious, even if they have these preconceived notions, [they] are like, ‘This is so f*cking good; what was I thinking?’”

NEXT UP
Culture
On The List (With Melissa Rich): How To Throw The Ultimate Apartment Party
Fashion
Meet The Depop Seller Making Belts Out of Tiny Bonne Maman Jars
Culture
Marie Faustin Loves To Waste Men’s Time
Astrology
How to Use Astrology to Access Past Lives
Style + Culture, delivered straight to your inbox.