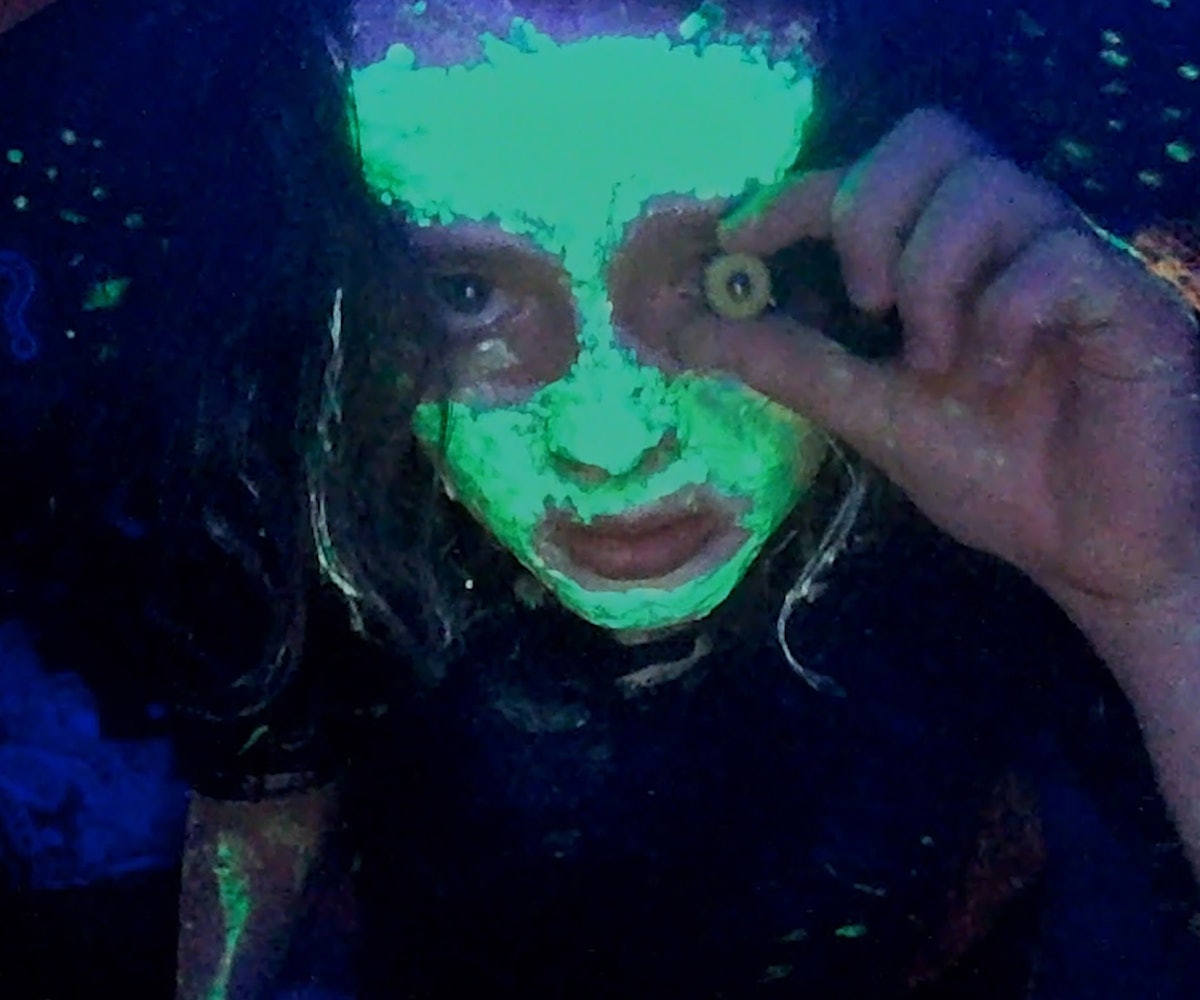 “I’ll make sure to update if I start to notice any changes,” says Casey, the teenage protagonist of We’re All Going to the World’s Fair, punctuating a video message to her followers with a mysterious promise. She has just finished taking the “World’s Fair Challenge,” a prerequisite for anyone eager to participate in the spooky online role-playing game for which the film is named. After repeating the phrase “I want to go to the World’s Fair” three times, slowly and with conviction, Casey stabs her finger with a pin until she starts to bleed. Even with minimal context, the viewer quickly recognizes that whatever “changes” this Candyman-esque initiation might prompt will likely be of the macabre variety. Later, in another self-recorded video, Casey shares her motivation for taking the challenge in the first place: “I love horror movies, and I thought it might be cool to try actually living in one.”

Out April 15 in select theaters, and then nationwide on April 22, We’re All Going to the World’s Fair is the debut feature film from director Jane Schoenbrun. Its slippery narrative tracks creative loner Casey (Anna Cobb) in the weeks following her decision to start playing “World’s Fair,” a collaborative storytelling game in which far-flung participants trade eerie details about the challenge’s alleged emotional and physical side effects. One in-game upload features a shirtless man repeatedly slapping himself while jogging on a treadmill. In another, a swoopy-haired teenager shows off a mysterious skin rash, prefixing a legitimately upsetting sequence of body horror. Casey begins documenting her own experiences, simultaneously absorbing and advancing the ever-growing anthology of crowd-sourced lore. Soon the borders between screen and reality begin to decompose, a muddling compounded by Casey’s increasingly fraught communications with JLB (Michael J. Rogers), a middle-aged stranger who watches all of her videos.

Helmed by a filmmaker whose résumé includes an archival documentary about the infamous Internet monster Slenderman, World’s Fair feels uniquely attuned to the ways online creativity can conjure both beauty and danger. While not explicitly autobiographical, the film takes spiritual inspiration from Schoenbrun’s own sleepless turn-of-the-millennium adolescence, which they spent surfing pre-Creepypasta horror-themed messageboards on the family desktop. “From the youngest age, I was drawn to these dark corners of the world,” Schoenbrun tells me recently, speaking over Zoom from their home in Brooklyn. “I always found something really comforting and magical about sad, spooky stuff. When I'm working as an artist, that's what comes out naturally. That's the space I want to surround myself in.”

One of tween-aged Schoenbrun’s most-visited web forums was dedicated to Scream, Wes Craven and Kevin Williamson’s mid-’90s revisionist slasher, praised to this day for incorporating metatextual commentary without sacrificing legitimate thrills and chills. Scream’s box office success led to a mixed bag of similarly self-reflexive splatterfests, a micro-era of horror history that Schoenbrun deliberately reflected on during the World’s Fair development process. “I love those movies, but I came from a place of not wanting to be postmodern just for the sake of being postmodern,” Schoenbrun tells me, explaining that they were more interested in investigating what it means to live through a cultural moment when the primary mode of expression is winking at our self-established conventions. “To me, [World’s Fair] is a reaction to that,” Schoenbrun says. “It's saying that we've reached a place emotionally where we can only communicate and build ourselves through fiction.”

Schoenbrun’s preoccupation with the evolution of genre cinema is explored through Casey, a character who can only really process reality using the language of the movies and TV shows she’s consumed. That video confession about how it “might be cool” to exist inside a horror film resonates differently when we recognize that Casey is operating within the context of a game that encourages self-performance. If she is anything like Schoenbrun, who is queer and trans, this affinity for online mytholigizing is presumably obscuring more nebulous yearnings. “I think that's probably the reason I was up late on the Internet while everyone else in my house slept,” Schoenbrun says. “I was looking in these horror spaces for some sort of intimacy that I knew I couldn't find in the surroundings I was growing up within.”

To achieve their vision of a film that captures this youthful soul-searching with poetic authenticity, Schoenbrun put together a trusted group of co-conspirators. Director of photography Daniel Patrick Carbone helped create an aesthetic that feels intentionally handmade, meticulously capturing both the bedroom-bound intimacy of Casey’s nighttime world and the depersonalized exteriors of her rural-suburban stomping grounds. Original music was composed by Alex G, a cult indie-rock figure known for making surreal earworms with pitch-warped vocals and delusional narrators; I’m hard-pressed to think of a more apt collaborator for a film about the psychic traumas of growing up in a world ruled by unreality. “I wanted to make a film that felt like how I felt as a kid, and not just in the [Casey] character but in the entire personality and perspective of the film,” Shoenbrun explains, demonstrating their understanding of the magic that can happen when form embodies theme.

The player most integral to the film’s mesmeric quality, though, is newcomer Anna Cobb, who was 17 years old at the time of filming. “The second we all saw her [audition] tape — after months of searching — we knew we had found Casey,” Schoenbrun remembers. Cobb, who has big sad eyes and a hard-to-place accent, embodies the complexities of Casey with an uncanny specificity. The result is a realized-feeling character who is at once menacing and lovable, ordinary and yet compulsively watchable. Cobb imbues Casey’s most self-consciously premeditated videos — like the ritualistic opening, or an unexpectedly disquieting scene in which she films herself dancing — with a psychological truthfulness; she makes us believe in the idea of Casey, even when we suspect that the character is not being honest. Schoenbrun credits the transformative performance to Cobb’s extensive preparation but also to less tangible traits: “Anna is one of the most intuitive and perceptive people I've ever met,” Schoenbrun says.

But I can’t help spotting similarities between Casey and Dorothy, two lonely young people using daydreams to escape their daily dread, inadvertently stumbling into disorienting moments of self-discovery in the process.

The second time I finished watching We’re All Going to the World’s Fair, I couldn’t stop thinking about Casey as a kind of post-Internet Dorothy Gale, the iconic Wizard of Oz heroine for whom a mystical realm provides a reprieve from the so-called real world. Specifically, my thoughts drifted to Return to Oz, Walter Murch’s dark-sided 1985 sequel, which ultimately has more in common with something like Valerie and Her Week of Wonders than the Judy Garland musical. The film’s opening finds young Dorothy back in drab, Depression-era Kansas, so despondent following her otherworldly adventures that her family sends her to an inpatient facility that practices electroshock therapy on children.

I didn’t find out if Schoenbrun conciously looked for inspiration in Oz, a fertile text previously mined by dream logic enthusiasts like David Lynch and Stanley Kubrick. But I can’t help spotting similarities between Casey and Dorothy, two lonely young people using daydreams to escape their daily dread, inadvertently stumbling into disorienting moments of self-discovery in the process. The opening couplet of “End Song,” which Alex G wrote to soundtrack World’s Fair’s closing credits, goes “I choose to stay / There is no other way.” For me, the lyric evokes grainy VHS memories of Dorothy’s depressive mental state at the start of Return to Oz. But it also perfectly complements the ambiguity of World’s Fair’s hauntingly poignant conclusion.

The fact that We’re All Going to the World’s Fair leaves so much unanswered further suggests that Schoenbrun isn’t looking to make some outsize argument about the state of the contemporary teenager or the perils of a too-online life, even if they find those things fascinating. “You want to resist the urge to be finger-waggy about it and say, like, ‘Look how bad kids today are; they can only talk through YouTube,’” they say near the end of our conversation. “To a certain degree, that’s true, but they’re also human beings trying to figure out a timeless mystery: Who the f*ck am I, and why am I here in this room?”

We’re All Going to the World’s Fair hits theaters starting April 15, and will be available on all digital platforms on April 22.