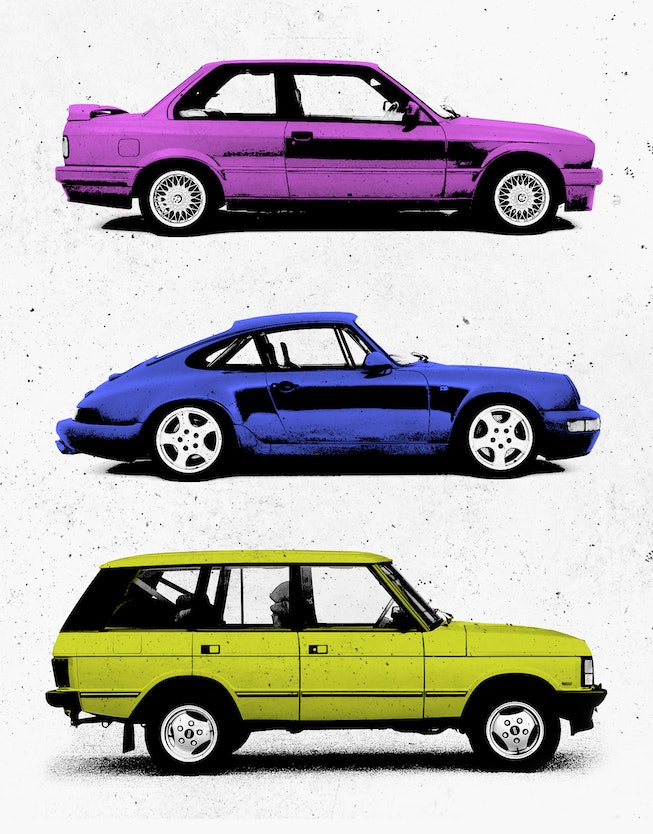 If you spend remotely (and regrettably) as much time on Instagram as I do, you may be familiar with the image I'm about to describe to you: A green Land Rover — perhaps a Defender model and likely from the early 1990s — sits parked on a forest lawn. The car itself is enormous and almost militaristic in design, surely playing into a Kerouacian fantasy of driving into the woods to solitarily mull over your life.

Though maybe, instead, your Instagram spelunking has shown you a 1994 Porsche 993 inside a minimalist brick garage or a classic mid-1980s Ford F-150 pickup truck cruising across a desert horizon. And maybe, too, you've seen these vehicles appear in your feeds alongside glossy lipstick swatches and decades-old Chanel editorials, as I have.

That cars both reside and thrive in our lifestyle ecosystem is not new. They are as potent an accessory to our consumer-backed lives as any handbag or pair of sneakers. What is new, however, is our nostalgia-driven appreciation for this specific era of vintage automobiles — 30-year-old gas-guzzlers — both online and off.

As Revlon's creative director, Ruba Abu-Nimah has such an implicit understanding of the intersection between art and commerce that Sotheby's called her "Warholian," and she highlights this prowess on her popular Instagram page. On @ruba, users are as likely to see a Ferrari as they are a droplet of nail polish.

"I love things that are carefully considered and that are inherently beautiful and useful, and a well-designed car falls under that category," says Abu-Nimah. "Some of the greatest innovators in industrial design have been car designers who cared only of making the best cars possible with no market research, no data collection, no focus groups and the like. They wanted to make the most beautiful and fastest cars in the world, and they did and still do."

Abu-Nimah references car designers like Battista Farina, Giorgetto Giugiaro, Ferdinand Porsche, and Enzo Ferrari, whose storied approaches to creating automobiles were more in line with those of a ready-to-wear fashion designer than with, say, a mechanical engineer.

"You could almost think about cars like you're wearing them," says Highsnobiety style director Jake Woolf, who also posts at nostalgia-adjacent Instagram moodboard account @aughtsicons. "So if you're in your car, your car is part of your outfit because when people see you in it, that's all they see. They see you and they see the car."

Over on @aughtsicons, cars like 2006 Toyota Land Cruisers and 1994 BMW 850CSIs are enmeshed among fashion, retail, and entertainment imagery of a similar era. (Think stills from 2000's American Psycho, 1991 iMac posters, flat-lay photos of Nike's 1991 ACG trail runners.) The current car wave seen across Instagram, as well as on the physical road, harkens back to the same nostalgic era 20 to 30 years in the past.

This is scientific, at least in a psychological sense: According to the 20-year trend cycle, something popular is likely to resurface two decades later. So while the cars themselves — like the Land Rovers that were first introduced during Bill Clinton's first presidential term — play into cyclical trend forecasting, they represent a deeper inkling toward aesthetic nostalgia, too.

"It's more about the time period than anything else," says Woolf. "It's the way Instagram is flooded with pictures of Brad Pitt and Jennifer Aniston. Cars play into that same thing. It's capturing the entire mood of that era, and while a lot of that is the people and the clothes, a big part of that aesthetic, too, is the cars people were driving."

Today, that "mood" elevates products like cars, but also shoes, clothing, and homeware that are both minimalist in design and built to last in production. Yet Woolf explains that the cars increasingly being referenced today aren't just ticking the trend boxes aesthetically — they also represent a relevant "buy less, but better" eco-conscious mentality. While not a trend, this mindset was as powerful 30 years ago as it is today: According to a Gallup poll released after the 1988 presidential election, the environment was the No. 1 concern of the voting public.

"The nostalgia you refer to is not new," says Abu-Nimah. "Good design doesn't fear time, and as each generation comes along, there's a newfound love for the past and the rare and the aesthetically pleasing. It's the same with anything, really: sneakers, clothes, furniture. It's not unique to cars at all."

Stephen Jones is the founder and CEO of Second Daily Curated Car Auction, a boutique online auction house focused on what he calls "collectible, enthusiast niche cars." Hence the name "Second Daily": These cars aren't meant to be primary daily drivers, he says, but can be considered a second "daily driver" you rotate throughout the week.

Run out of a wooded Tennessee town 15 miles north of Chattanooga, Second Daily lists cars that users submit and helps sell them by providing the online auction platform, writing the ad copy, and pushing that ad throughout its channels and networks. To bid online, buyers register by providing a valid credit card for a pre-authorization to help control what Jones calls "dead-beat bidders."

A scroll through Second Daily's roster of auctions highlights the same genre of vehicle Woolf associated with Pitt and Aniston's lasting cult of personality. Take the 1989 Jaguar XJS V12 Coupe that hit the auction block with 58,000 miles and an estimated value of $8,000.

So who, exactly, is Second Daily attracting? Jones is sure to note that the desire for vintage cars extends beyond the rich, famous, and status buyers — though that clientele certainly engages with its services.

"These types of cars don't need to be and shouldn't be reserved for the financially elite," says Jones. "We showcase cars across a wide price band for this specific reason."

Purchasing vehicles secondhand is indeed more budget-friendly for millennial car-buyers, who possess notable buying power ($200 billion annually) but not the accrued wealth of their Baby Boomer counterparts in the market. That a reported 70% of millennials also use Instagram daily is no small coincidence, and helps explain why you may be seeing more cars on the platform that were once aspirational during the group's childhood.

For sustainability-driven millennials, then, this begs the question: How do eco-conscious consumers make sense of buying a car that gets roughly half the miles per gallon of a hybrid vehicle, like a Toyota Prius? And is a brand-new Prius even environmentally "better" to own and operate than a vintage gas-guzzler?

"A lot of the reason that people buy Priuses now is just because it's new and reliable and cheap to fix," says Woolf. "It's not like everyone who buys a Prius is like, 'Oh, I'm going to save the environment with this hybrid.' It's more that it's not a pain in the *ss to own."

That same rationale isn't exactly the case with a 30-year-old SUV, which not only requires more gas, emitting more carbon, but also proves to be an expensive, difficult vehicle to maintain. Still, there's no formal and comprehensive regulations on which vehicle — between a fresh-off-the-conveyer-belt electric model or a recycled gas-guzzler — is less harmful for the planet overall. Because really, the most sustainable car you can drive is none at all.

"Sustainability is crucial to the survival of the planet, but you cannot go back in time and change the way cars were made 20, 30, 40 years ago," says Abu-Nimah. "So do you junk a car because it isn't sustainable? Does that help the planet? You preserve and maintain the history and legacy and you strive to continue to make beautiful, more responsible cars."

Even as we look forward, cars of our past will continue to bubble up across the nostalgia zeitgeist. With the 20-year trend cycle already pointing us toward the early- to mid-aughts, we can expect for the Hummer H2 — which Woolf says has retained its value quite well — to make a reappearance. Abu-Nimah points to the Porsche Taycan as a vehicle that has done well to pair the legacy of beautiful design with entirely sustainable features.

Yet cars will always embody that little something extra that won't fit in the vehicle particulars section of a brochure. And that's not unique to the rugged retro automobiles now en vogue.

"Cars are sexy," says Abu-Nimah. "They say that God is in the details, and those details are positively and deliberately sexual. Have you ever put your finger inside the door handle of a Porsche?"

NEXT UP
Culture
Spice Girls May Reunite For King Charles’ Coronation
Culture
Who Won At The 2023 Grammys
Culture
The Cutest Couples At The 2023 Grammys
Astrology
February 2023’s Full Snow Moon in Leo Embraces The Real You
Style + Culture, delivered straight to your inbox.