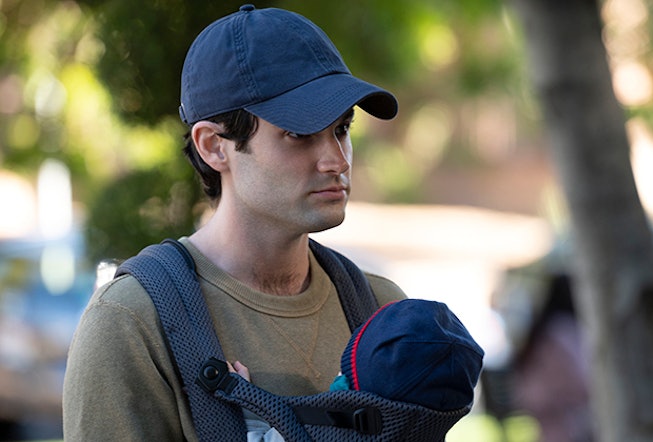 You is a captivating train wreck. There’s something so delectably cringe about Penn Badgley as Joe Goldberg, the quiet bookstore owner who’s a kind of Lonely Boy for this decade. We can’t get enough of his “nice guy” demeanor, his sadistic low voice, the way he talks in circles to justify his decisions, which are at best, kind of creepy and at worst, literally murderous.

It’s the kind of show you want to hate, but can’t help but love: for its ridiculousness, salaciousness, for how creepy Joe is, and for how much he’s like Badgley’s Gossip Girl predecessor, Dan Humphrey. You and Joe’s uniquely skewed moral compass will make you sick to your stomach, and then have you immediately looking up think pieces and considering buying a copy of The Body Keeps The Score once you’ve recovered from the shock of whatever disturbing act he just justified as out of love.

Nevertheless, You should be embraced for how far it’s willing to go. There are some pretty bonkers moments on the spectrum between “spying on a girl” and “murdering the guy she’s sleeping with.” I mean, framing your girlfriend’s therapist for her murder? Depraved! Below are nine of the creepiest moments from You Seasons 1 and 2 to get you ready for Season 3, which, with the combo of Love, Joe, his new neighbor, and a newborn baby, is sure to be the most bananas season yet.

The following contains spoilers for You.

When Joe masturbates outside Beck’s apartment

Okay, it’s not murder, but this is the first moment Joe goes from kind of weird but well-meaning “nice guy,” to full blown creep, as he jacks off while watching Beck through her window do the same thing. From this moment, we know everything is going downhill.

The first person we see Joe murder is Benji, Beck’s asshole hookup, whom Joe is determined to get out of her life so she sees he’s the only man for her, because that always works.

One of the many bizarre storylines in the first season of You is the love triangle between Beck, Joe, and her friend Peach, who is secretly in love with Beck. He first tries to kill her by hitting her over the head with a rock while she’s running in Central Park. Later, she tries to shoot him at her family’s estate, but he shoots her, and makes it look like a suicide. Dark.

Okay, let’s talk about Dr. Nicky (John Stamos). First, he has an affair with Beck, his patient. (This girl has wildly bad luck.) Then, after Joe traps and imprisons Beck in his weird basement bookstore glass cube, she convinces him to let her out, telling him she’s going to frame Dr. Nicky, writing a note detailing how Dr. Nicky was obsessed with her. After he kills Beck, Joe uses the note to frame Dr. Nicky for the deaths of Beck, Peach, and Benji, which all but ensures that the innocent Dr. Nicky spends the rest of his life behind bars.

When Joe kidnaps Will to steal his identity

At the beginning of Season 2, Joe has relocated to Los Angeles and has a new identity: Will Bettelheim, an identity he stole from a guy he hit over the head with a brick and kidnapped, storing him in his bookstore prison. Attempting to turn over a new leaf, he actually lets Will leave the cage, but not before he’s inflicted a lifetime of psychic wounds.

In Season 2, we learn what really happened with Joe’s ex-girlfriend Candace, who we presume to be dead until she shows up at the bookstore in Season 1. Turns out, he hits her over the head and buries her alive in a shallow grave.

When Joe kidnaps Delilah, whom Love then murders

Joe kidnaps Delilah, the building manager and investigative reporter he befriends (now that’s a realistic depiction of modern journalism careers), and though he intends to set her free, he gets delayed by an acid trip, and Love kills her before he can get back to the cage. That’s amoré!

Joe has a soft spot for his young neighbor Paco, and offers himself as a role model to the young boy. Things get complicated when Joe stabs Ron, Paco’s mom’s abusive boyfriend in Season 1, and then convinces Paco not to tell anyone. While Joe sees this (and all his murders) as justified, and tells Paco that some people deserve to die. It’s what Joe’s guardian told him growing up — thus contributing to him becoming a serial killer — and just like that, the cycle begins again.

In a dark twist, Love murders Candace, cutting her neck open with a broken glass bottle after Candace reveals the truth about Joe. Turns out, Love and Joe are a perfect match, just one made in Hell!