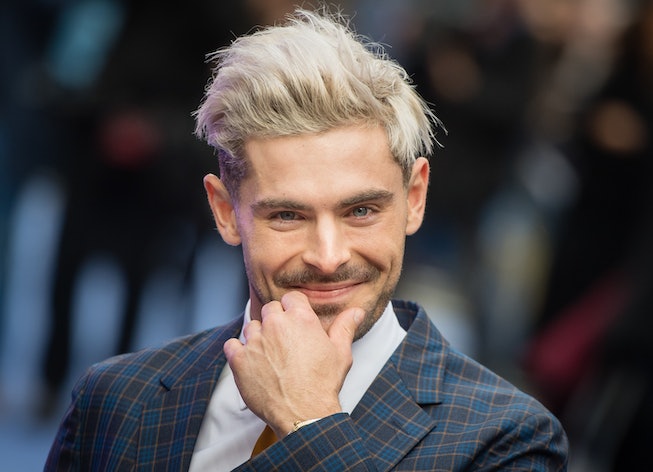 Zac Efron has finally made his TikTok debut. Efron joins Avril Lavigne and Tony Hawk as the latest celeb to get on the app to cash in on 2000s nostalgia wave, just in time for the 14 year anniversary of the release of High School Musical 2.

We can all thanks Jessica Alba for this development, who posted the TikTok and convinced Efron to learn the dance. Alba and Efron are starring in a series of commercials for Visit Dubai, encouraging tourists to visit the United Arab Emirates city. This TikTok might as well be part of the campaign: The duo is seen wearing coordinating, monochromatic tan outfits in a gorgeous wood-beamed, white-stone outdoor area and dancing to a remix of Young T and Bugsey's "Don’t Rush" that gives an energy somewhere between La La Land and the Death On The Nile remake.

The video has been viewed 14.3 million times, with more than 11,000 comments that include general sentiments about how hot Zac Efron is even though he is 40 and how many people can’t unsee him as Ted Bundy after he starred as the serial killer in the Netflix film Extremely Wicked, Shockingly Evil and Vile.

Alba captioned the clip: "That time in #Dubai I got #zacefron to do a #tiktok dance 💃🏽🕺🏻w me… while shooting movie trailers 4 #dubaitourism ☺️.” Alba wrote on Instagram that it took her over an hour to learn the dance, while it took Efron only two minutes, which shouldn’t come as a surprise if you’ve revisited the elaborate basketball choreography of “Get’Cha Head In The Game” recently. Alba asked in an Instagram poll if the two should do a High School Musical and Honey — Alba’s 2003 sorely underrated dance movie — crossover, to which 95% of viewers voted “yes.”

Alba and Efron are shooting six Dubai tourism promos to be released over the next several months, each imitating a different movie genre, according to Entertainment Tonight. Directed by I, Tonya and Cruella’s Craig Gillespie, the trailers are as corny as they sound, but are also kind of sweet. In one Wes Anderson-color-soaked trailer, they play two people who mistakenly switch bags and fall in love with each other based on the contents of their suitcases, eventually culminating in a meet-cute. A realistic vacation!