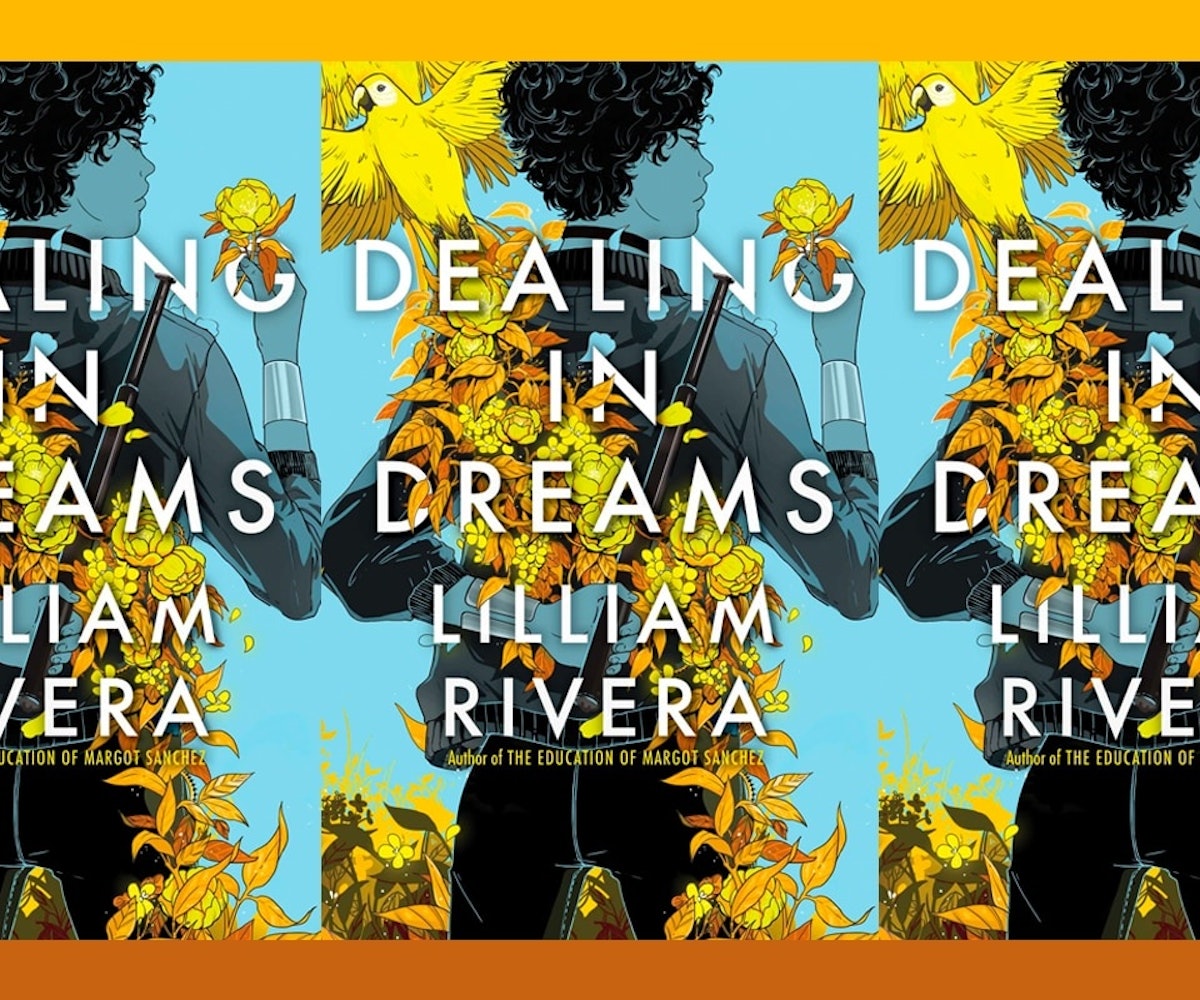 "It's about capitalism! It's all about capitalism," Lilliam Rivera told me, when we met to talk about her latest book, Dealing in Dreams. She was laughing as she said this, because Dealing in Dreams would more typically be described as being a YA novel that centers around teenage girl gangs, roaming the streets of Mega City, an urban dystopian wasteland governed by a questionably benevolent matriarchy. But, of course, since dystopian fiction is usually a reflection of our actual society, if not a subversion of a supposed utopian one, it's generally a fun-house mirror reflection of the ills of our world. And the primary problem in our world? You hate to see it: capitalism.

Centered around 16-year-old Nalah, who leads girl-gang Las Mal Criadas, and navigates a world abounding in treachery and ambiguity, Rivera's novel exposes a world filled with exquisite, unflinching brutality, but also offers a real tenderness toward its young characters, many of whom are doing the best they can as they rapidly lose faith in the people and institutions they thought were supposed to protect them. It's a perfect coming-of-age novel in that way, demonstrating all the different ways there are to lose faith, but figure out a way to continue on anyway.

For the Bronx-born, California-dwelling Rivera, the act of questioning powerful institutions is an essential part of her art—even as it's aimed at teen readers who might not want to feel like they're getting, Rivera said, "a history report." Which is why, she told me, she also has to remind herself to tell readers: "It's an action-packed book! You will like this book." And, they will. It's hard not to, so filled is it with this surreal, ultra-vivid landscape, that feels nothing like a history report, and everything like a fully realized alternative future.

Still, though, it's a powerful experience to read this novel and think about all the ways that power corrupts, and that our institutions are designed to oppress us, even as they lure us close with their promises of the American Dream.

Below, I speak with Rivera about the American Dream, capitalism, and the appeal of writing for a teenage audience.

It's the time in our lives we're finally figuring out how to form our own identity. I think what's so fascinating about that, and it's one thing that I think Dealing in Dreams deals so well with, is that as we're trying to make these decisions, we're offered up so many specific binary choices. Even the whole premise of young adulthood is so fascinating. There's this before and after. There's childhood and adulthood. But it's not so simple, there's actually so much ambiguity, it's like being in a dream state, wherein anything can happen.

There's this thing where you have to know what you're going to do. You have to go to college, you have to know what you're going to do. But that's the time when we have no idea. I love that. I think for young people too, because I speak to a lot of them and I travel a lot for the books, some of them are really confident in the sense of like, they're okay with not knowing. They're okay with the ambiguity of gender, all of those things—they are so okay with it. I think a lot of the times it's mostly the adults who aren't okay with it.

RIght, it's like, kids are given all these choices, with all these predetermined answers, but they tend to reject the idea that there is a right or wrong. It doesn't exist anymore, this idea that there's one correct way to be.

I'm always in awe of that they're much more accepting, and it's usually the adults who are way more nervous about things. Even say, for example, Dealing in Dreams; I'll talk to an adult or a librarian or a teacher and I'll say, "Dealing in Dreams is about girl gangs," and you'll just feel this, Oh no, girl gangs. And I'll be like, "You read The Outsiders. It's a Latinx flip of it." Then they're okay with that.

Take out the word "girl" from "girl gangs" and everything's fine because it's something that has been done before. But some people still aren't comfortable with subverting these archetypes. What made doing that so interesting to you?

I grew up reading The Outsiders. I grew up reading A Clockwork Orange. I was really obsessed with that book when I was in high school; even though I felt it was super violent, I could relate to those boys in a lot of ways, maybe even more than the other books that I was reading. I wanted to write the book that I would loved to have read when I was young. I would loved to have read a Latina leading a young group of girls into unknown territory and being flawed, making flawed decisions. Like, what does it look like to be the leader of a family that you created? And this idea of power. Being seduced by power, and the future. I wanted all of those things. I was interested in the girls and what they were doing. I wanted to follow that world, a society that's matriarchal and looks pretty utopian, but maybe isn't.

One of the things that's so interesting about dystopian fiction that's definitely present in Dealing in Dreams is how fine of a line it is between dystopia and utopia. Here, the utopian aspect is because it's a power structure populated by women, which is an appealing subversion. But then you turn it around to question the nature of power, in general.

The Women's March was happening at the time I was re-writing this novel. I kept thinking about how people were saying, "We just need a female president and everything will be great." And I was just thinking, There's something really disturbing about that mindset. I'm like, Is it really great for all women of color? I kept thinking about the women's suffrage movement and how women of color were pushed aside. All of those things kept playing in my head when I was writing it. I'm down with girls reading about other girls being empowered by their violence. Unashamed about it. I'm also really interested in introducing those questions about corruption and power and governments, really. Governments as a whole, systems, and institutions. I'm just like, I don't know if any of those things work. So let's just talk about it in a way that's still entertaining and action-packed.

It feels liberating to get to write about the world this way. You don't have to offer solutions. You're just reflecting and speculating without having to be pedantic.

My background in college is history. I feel like if I were to explain all the themes in this book, it would sound like a history report. I don't want that. I don't want it to convey any kind of moral decisions in this book. If you read it, it's really kind of open-ended. But, I want the questions to be asked. Yes, [these characters] super female-empowerment and they can kick another person's ass, great. But is violence really the answer? Is peace really the answer?

I think that that's actually the most powerful aspect of it. The refusal to make any kind of pat conclusion. And it makes us realize we need to find comfort in the fact that there are no solutions.

When I speak to kids, I don't really sugarcoat any of my history; growing up in the South Bronx, the violence that I'd witness as a young kid, I'm pretty open with all that stuff. I feel like, for kids, it really makes a difference [to hear the truth].

It's important, I think, for kids, but also for adults, to have protagonists for whom it's not too late to realize that they can find a new way to live, to see the world, even after they've made mistakes. To get away from a narrative of definite progress, an idealistic vision of good and bad.

I question everything that has absolutes. It's like [when people say,] "When we were with Obama, it was amazing." And I'm like, "Can we talk about Obama's immigration policy back then?" Because it wasn't amazing. We're a culture that forgets. We're a culture of rewriting history. I don't like absolutes in any way. You have to question that, and [ask] how does it affect a person of color? How does it affect Puerto Ricans? When I was writing Dealing in Dreams, I was reading a lot about the opiate crisis and how it affects Puerto Ricans and the Bronx in particular. No one talks about how the opiate crisis, the first time, was through Puerto Ricans.

No, it's all about the poor white man who has to be the victim, because the powers that be don't think anyone else will garner sympathy.

That's the thing that always blows my mind. It's like, let's get into the history of the first people who used that drug, it was Puerto Rican women on the islands. We were the guinea pigs. It's like, who are we disregarding when it comes to conversations about addiction and government policy toward that? Who's going to get help and who isn't? I'm always writing about those things, and also not changing who the enemy is. It's not just the white person—it's the person with power. That person could look as familiar to me as anyone.

The reality is that a person will always be corrupt when they wield power in a system that is designed to oppress people.

Ultimately, that is the book I'm trying to write. I'm always thinking about the American Dream and how my parents were forced to leave Puerto Rico to come to the U.S. to pursue the American Dream. I'm always curious about these social experiments being done on people of color. Class always plays in everything that I write, and the slight guilt of pursuing that; the guilt of pursuing the real American Dream and then denying all the things that make me Latina, Puerto Rican; I have this fantasy of what that island life is like, even though I've never even lived there.

When you're participating in the American Dream, though, you're automatically corrupting yourself. It's just kind of the issue with capitalism in general, really.

I know, I know. Listen, I go on panels, and I'm on a panel, and it's young people up there, and I'm just saying, "You know, it's really a question about capitalism!" And then I remember to say, you know, "It's an action-packed book! You will like this book." But sometimes I'm like, "It's about capitalism! It's all about capitalism."

So right now, my third novel comes out next year in the fall, and the title is Fierce and Yuri, and it's a retelling of the Greek myth of Orpheus and Eurydice, set in the South Bronx; and Yuri is a displaced Puerto Rican from Hurricane Maria who is suffering through PTSD and also has an evil spirit following her, and Fierce is a wannabe bachata singer who falls in love with Yuri, and doesn't believe in spirits.

It should be fun. I mean it's fun, and it's also way more personal than I thought it would be, because it's dealing with Puerto Rico and the island and mental illness or mental issues. You know, Latinx have a really high rate of suicide, and a lot of families don't believe in medication. So I wanted to write about that too, that aspect of it, which I think is still holding for a lot of young people.

Dealing in Dreams is available for purchase, here.