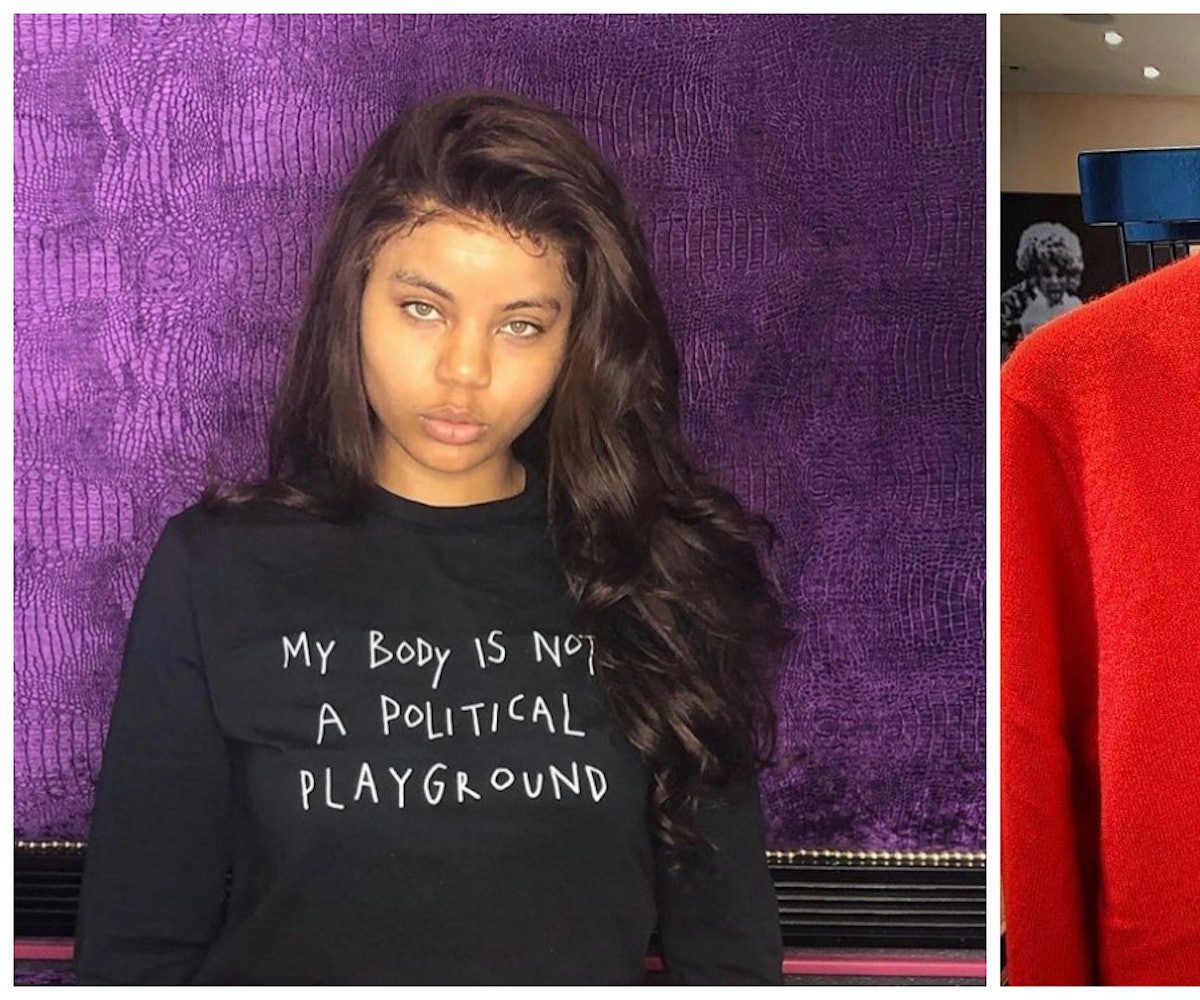 Samirah Raheem, a model who went viral for a video taken of her at SlutWalk saying that her "body is not a political playground," called out trendy brand Lingua Franca for "stealing" her words and embroidering them on a sweater, which Raheem says was done without her consent or prior knowledge.

In a lengthy Instagram post addressed to the brand, Raheem wrote, "I'm happy you were inspired by my words, but using them without prior notice or acknowledgment is insulting and disrespectful to the risk I took and the consequences of my actions that I've been living with since that day." She also wrote, "It's disappointing that you invalidated who I am as artist by stealing my words to sell sweaters and promote awareness of your brand. Those words came thru me that day organically as I defended myself and clarified my position politically to a hostile bigot."

Raheem also alluded to posts and comments on Lingua Franca's Instagram page, which are no longer available. "Adding insult to injury your response to my followers questioning comments on you feed last night is an attempt to undermine my authorship of of those words," she wrote. "It's essentially being gaslighted by a supposed ally. Furthermore you [are] now posting images of me to somehow offset the difficult situation you find yourself in and editing your caption from yesterdays post to now include me feels desperate and undermining." These posts, as well as the listing of the piece on the Lingua Franca site, are gone, though Raheem posted screenshots that show that they were both once there.

In an Instagram Live story, Raheem also claims that some of the quotes placed on Lingua Franca clothing are "cultural appropriation," such as shirts that say things like "we shall overcome" and "black lives matter." She expanded: "I question why you feel entitled to you use my words but even more bewildered by the fact that you feel comfortable taking words like 'we shall overcome' which is a negro spiritual and key anthem of the civil rights movements to sell your product." Raheem made her own shirts with this quote on them previously, as she shows in her post. The proceeds from hers go to the Amazing Grace Conservatory.

That said, in her Instagram Live, Raheem did praise the brand for speaking up against the Alabama abortion legislation, but made clear that this is not the way to do it. "This just another tragic example of people of privilege getting seeing the 'woke' movement as a business opportunity and behaving clumsily in the sphere," she wrote in her comment.

Lingua Franca has since issued a response to its Instagram, written by the brand's founder, Rachelle Hruska, who explained that she wanted to create a piece as a protest to Alabama's anti-abortion legislation. "Scrolling through Pinterest looking for inspiration and pro-women's-rights phrases, this powerful statement caught my eye, and being inspired right away, I got the team to start stitching the phrase without looking into it more," the statement reads. "The minute I learned from folks on IG that this phrase came from words spoken by Samirah Raheem @thisishowilook I was taken aback by my own haste and the fact that I inadvertently lifted her words."

The statement discloses that the brand has made $3,525 from sales of the sweater, which will go directly to the Yellowhammer Fund. It also says that the brand plans to send the same amount to Raheem "as a gesture of respect for her work and her words." Additionally, Lingua Franca will donate 10 percent of all sales for the rest of the month to the Yellowhammer Fund. Hruska also disclosed to NYLON that she planned to have a conversation with Raheem today. Raheem has also been contacted for a comment, but has not yet responded to our request.