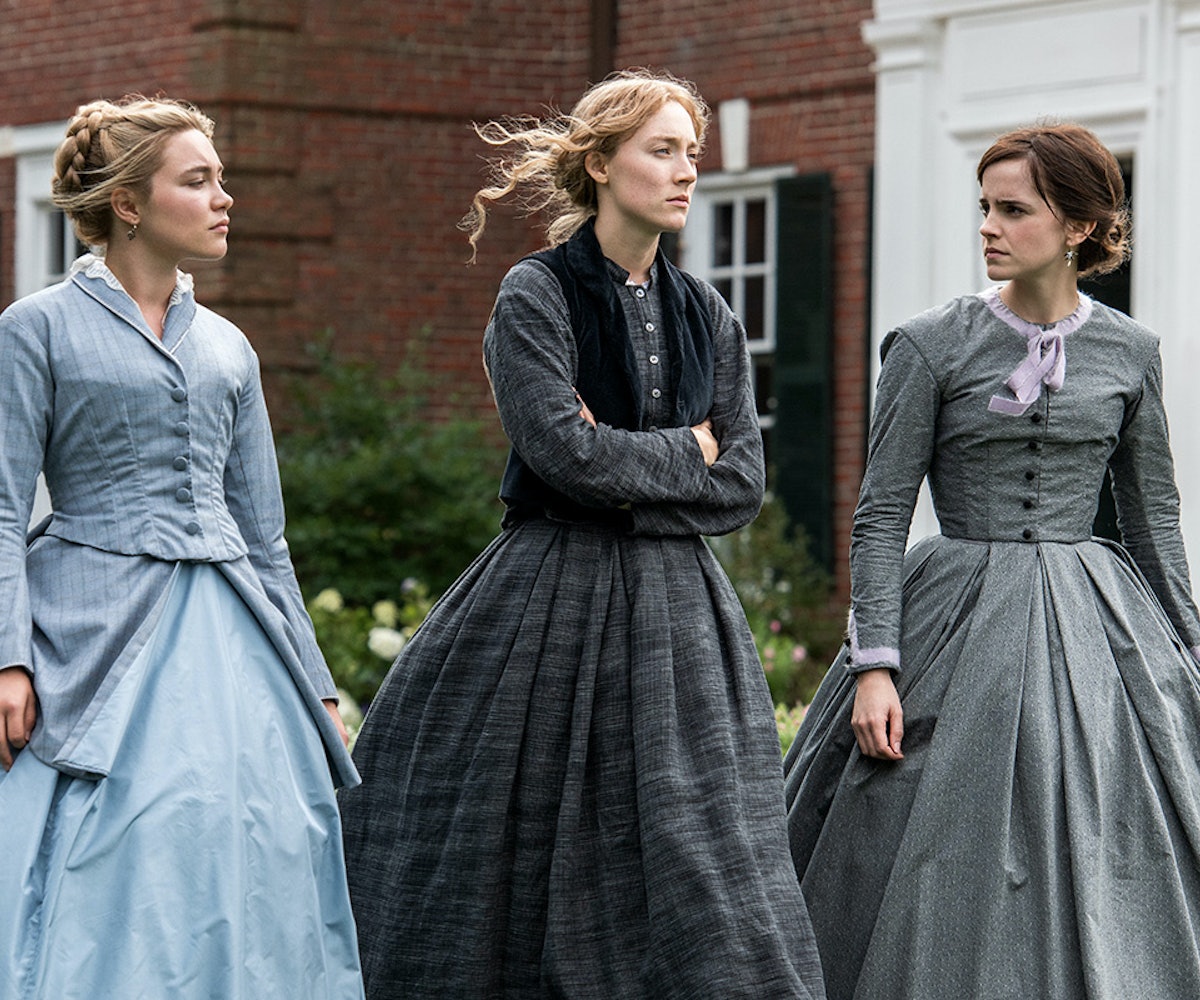 It's hard to imagine a work of classic literature less in need of another faithful adaptation than Louisa May Alcott's Little Women. Though there aren't radically more (theatrically released) adaptations than there are, say, versions of A Star is Born, the Little Women movies have a much narrower range of interpretation. Most films of Alcott's novel, including the new Little Women written and directed by Greta Gerwig that's opening in theaters on Christmas Day, start with a poor-but-loving family whose patriarch is off fighting in the Civil War, and proceed to hit many of the same plot points as Jo March and her sisters Meg, Beth, and Amy all come of age.

On that level, Gerwig's movie may seem unnecessary. The writer-director known for the zingy but believable dialogue and whip-crack editing of Lady Bird(as well as her starring/co-writing gigs in Frances Ha and Mistress America) isn't exactly inventing new adventures or one-liners or settings for the Marches, and has to re-stage any number of moments that anyone who's seen even a single Little Women adaptation will have seen before. This is also the longest Little Women in terms of running time (at least without dipping into various TV miniseries versions), which means there's room for most of the greatest hits.

But as it turns out, watching multiple versions of Little Women in close proximity makes the Gerwig film feel more vital and innovative than it otherwise might. The original material has a few winking meta-textual elements that are built in — this is, after all, the fictionalized story of an author deciding to write a fictionalized story of her life — and a few others that Gerwig adds or emphasizes (Jo, the budding writer, has a couple of scenes where she discusses her work with a prospective publisher). But more than a meta-textual origin story, Gerwig's film is also, in part, about the act of re-interpreting and re-contextualizing all of those familiar scenes. It's a Little Women adaptation that, maybe consciously but never self-consciously, plays on the existence of other Little Women adaptations.

As such, there aren't a lot of striking plot changes, something that's characteristic across the 1933, 1949, 1994, and 2018 adaptations, too. (Two silent-film adaptations produced in 1917 and 1918 have since been lost — to say nothing of the 2001 version starring Julia Stiles, Jennifer Love Hewitt, and a young Scarlett Johansson that I just made up.) A few moments get skipped in some versions and included in others, but the course of the story never goes too far astray. It's a safe bet that almost any version of Little Women will include some minor variation on Jo accidentally burning off Meg's hair before a party; Amy intentionally burning Jo's manuscript for revenge; Beth's cycle of illness and recovery; next-door neighbor Laurie's confession of love; and Jo spending some time as a governess and writer in New York City, among others.

The personalities, too, remain steadfast, at least on paper: Eldest Meg is domestic-minded; Jo is independent and quick-tempered; Beth is timid and good-hearted; youngest Amy longs for luxury. How these well-known characters are played inevitably shifts across remakes, as all of the films grapple with telling a story about adolescent girls, set over a considerable time period, with actresses who are often visibly older than their characters. This still happens all the time, of course, up to and including Gerwig's version, where 25-year-old Saoirse Ronan plays around 18 for the fourth or fifth time in the past half-decade. But it's particularly glaring in the 1949 Little Women, directed by Mervyn LeRoy, where June Allyson plays Jo despite being over 30 at the time of filming.

Jo isn't the character most affected by age and timeline shenanigans (Amy usually gets the worst of it there), but she's still enormously affected by casting and performance, more so than, say, whether Amy comes across as bratty or simply out of fucks to give (Kirsten Dunst and Florence Pugh, at opposite ends of the Amy age-range, both tend toward the latter). As much as all of these Little Women movies attempt to work as familial ensembles, Jo's storyline inevitably moves to the center, as she undergoes the most noticeable change. The 1949 film has less sure-handed treatment of this evolution, trying to convey her tempestuousness by amping up both the anger and the emotional breakdowns—maybe overcompensating for Allyson clearly being a full-grown adult in the part, or maybe revealing the more dutiful nature of this respectful but not especially exciting Technicolor production.

Whatever the reason, the 1949 Jo sometimes comes across as foolish, which is never the case for the similarly non-teenaged Katharine Hepburn incarnation of the character in the 1933 version directed by George Cukor. Hepburn and Cukor would go on to make a number of other pictures together, and Little Women is one of their less distinguished, neither as zippy as Cukor's subsequent romantic comedies nor as lush as some of his better melodramas (including the best version of A Star is Born). It most resembles his later work when Jo takes over the story in the final stretch; Hepburn is allowed to comfortably grow into Jo's adulthood, and Cukor sneaks some tableau-like compositions into the brisk checklist of a narrative. LeRoy's more superficially colorful film exacerbates the problem of Little Women turning anticlimactic in its back stretch; in that telling, Jo's life in New York lasts about six minutes, and Beth's illness returns abruptly in the final 15. Even Gillian Armstrong's more shaded 1994 version takes some shortcuts; like the '49, it makes Beth a more direct impetus for Jo's changes to her writing, an emotional but overly convenient shortcut.

Armstrong was the first woman to direct a Little Women feature, and her treatment of the Marches' world is a bit richer and more lived-in. Interestingly, her sensitivity extends to the male characters, too. Jo's best friend and not-quite-love-interest Laurie, played in '94 by a post-Newsies, way-pre-Batman Christian Bale, has the right balance of youthful playfulness and rich-boy dilettante leanings, and has more chemistry with Winona Ryder's Jo than his forgettable 1933 and 1949 counterparts. Gabriel Byrne does nicely understated work as the older professor Jo meets in New York, while Eric Stoltz makes the drippiness of Meg's husband play like a comic choice, not a default setting.

The new Little Women is coming out just a few days after the 25th anniversary of Armstrong's film, and some of the casting runs in parallel with that one. Instead of beloved perma-ingénue Ryder, there's beloved perma-ingénue Ronan as Jo; acclaimed TV actress Eliza Scanlen (Sharp Objects) subs for acclaimed TV actress Claire Danes (My So-Called Life) as Beth; and Florence Pugh may be older than Kirsten Dunst's Amy, but she's coming off a similar breakout year (Dunst having done Interview with the Vampire months earlier, while Pugh is coming off Midsommar). Laura Dern steps in for Susan Sarandon as the steady, wise Marmee, a less directly related substitution that nonetheless feels intuitively similar.

It's not uncommon for re-adaptations to be influenced as much by previous films as the original text, and this happens throughout the history of Little Women on screen: Back in 1949, Allyson was criticized for breaking into a Hepburn voice. More broadly, the presence of certain recurring scenes (Laurie and Jo dancing together outside the crowd of a fancy party, say) hints at the knowledge that they've worked cinematically before, and they'll damn well work again. It wouldn't be unusual, then, if Gerwig's Little Women functioned as a remake of Armstrong's (it's even from the same studio, with essentially the same release date). But Gerwig reshuffles the narrative in a way that plays on previous versions of the story without binding itself to any one in particular.

Rather than proceeding in a straight line from that first fatherless Christmas and employing a handful of judicious time-jumps, Gerwig ping-pongs between two halves of the novel, beginning with Jo as a young woman making her way in New York and flashing back to her earlier years in Concord, Massachusetts. Juxtaposing famous scenes with each other (placing, for example, Beth's bouts of illness in closer proximity) gives them new meaning, bringing out elements like Amy's exacting artistic frustration that tend to fade into the background in other movie versions. All of the March sisters benefit from this treatment, even as Jo remains at the center of the story; Jo's struggle to become a writer no longer elevates her concerns above the other Marches, but simply a different approach to the artistic temperament that they all possess to some degree or another. Gerwig's version of the story has a modern sensibility without leveling judgment over characters who don't share Jo's values or priorities. She also overcomes the sense of literary pageantry that can slow down literary adaptations: That Jo-Laurie dance scene, that just about every version has, becomes freshly lovely in 2019, with Ronan and Timothée Chalamet (reunited after Lady Bird) leaping around the outskirts of the party, both ebullient and a little sneaky. The film has the immediacy of recent memoir and the time-skipped quality of memory; it's like reading and re-reading a famous novel simultaneously.

That the new Little Women has the most contemporary texture of the group is especially impressive given that its most immediate predecessor is an actual (if little-seen) present-day adaptation, which beat Gerwig's movie to theaters by over a year. Writer-director Clare Niederpruem even re-structures the story similarly, starting with Jo in New York, focusing on her writing career before flashing back to her earlier life. But she fumbles the passage of time, badly. While Gerwig uses the time-hops to allow her actors the chance to be correctly age-cast for at least half of the movie, Niederpruem's cast winds up in a bizarre no man's land where they constantly scan as either much too old or much too young for whatever parts they're playing. Amy, in particular, looks 13 for five years of screen time, until she rapidly ages into a 20-something for the final stretch—but again it's Jo who must bear the brunt of the movie's clumsiness. Sarah Davenport plays her with at a manic pitch that the filmmakers seem to consider particularly millennial (the movie's cringe-y catchphrase, and even cringier theme song, involves the phrase "do all the things"), but comes across more like a Saturday Night Live sketch where a 30-something sketch performer plays a little kid (only not especially funny).

After it becomes clear that Little Women '18 will not actually offer a gay version of Laurie (Lucas Grabeel, wearing a lot of hats as co-star, producer, and theme-song-singer, and also literally wearing a lot of hats, like, from scene to scene), its sole innovation is the way it leans into the notion that all of the March sisters and Laurie can be A Bit Much. If Gerwig's film has some awareness that the audience might have seen or heard the stories of Little Women before, Niederpruem's has characters who appear uncomfortably aware of how they're play-acting their Little Women parts into an indistinct version of the 21st century. It's interesting to see the first big-screen Little Women to actually relocate out of the Civil War era, and then watch a period-faithful version come along and modernize the material more successfully. But it's one more way that Gerwig's film resembles an old-timey but surprisingly effective magic trick. Somehow, the fifth time is the most charmed.

Little Women is out in theaters December 25.