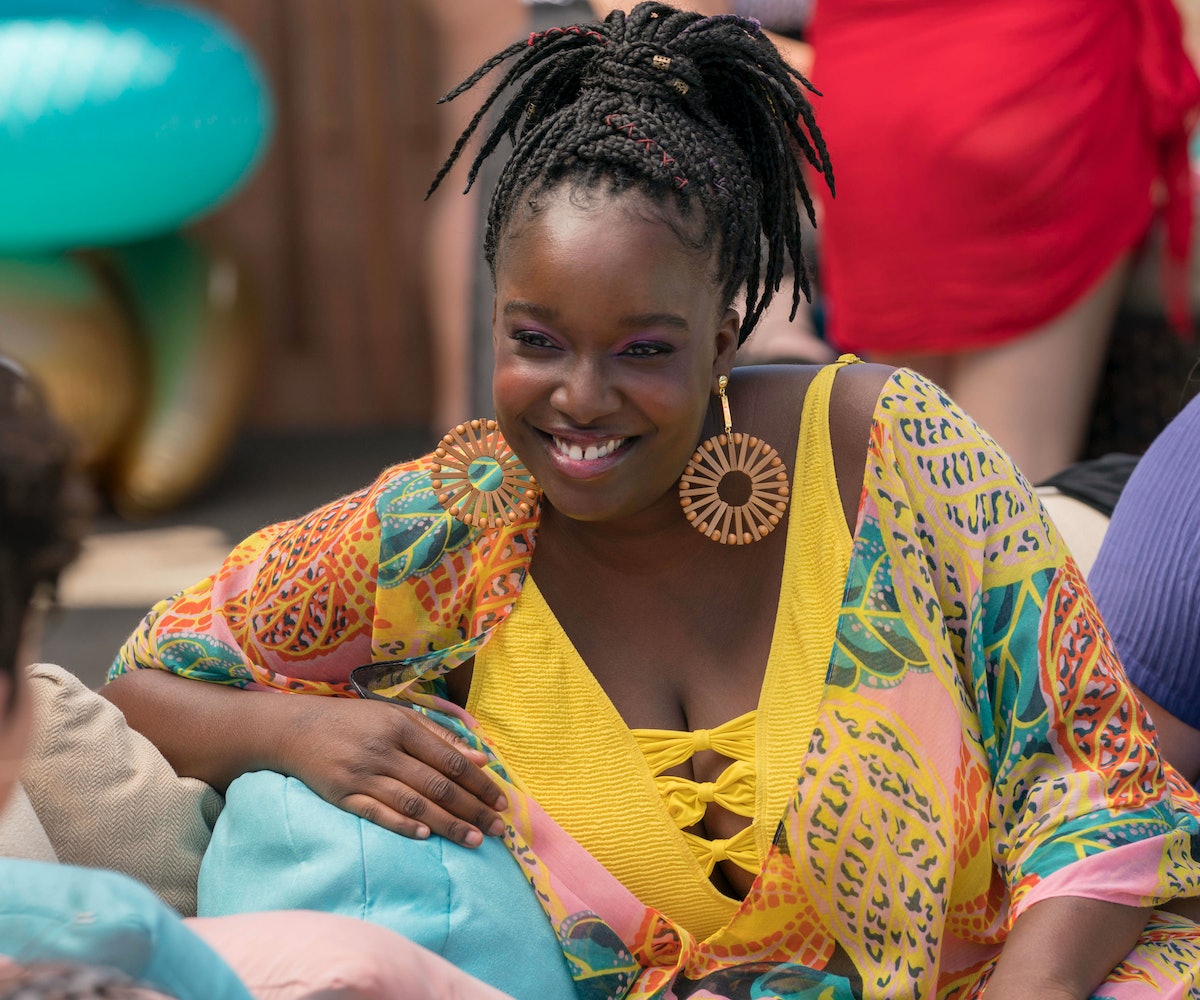 A couple of hours before I interviewed Lolly Adefope, who plays Fran on Hulu's new series Shrill, I saw her most recent tweet:

And so, of course, as soon as we sat down to talk, I immediately asked her about the Squatty Potty, and if it had changed her life, and we talked about ways of hacking the Squatty Potty and making our own instead of buying one, and it dawned on me that I was talking with a woman I'd never met before about toilets and bowel movements, as if we were already the best of friends.

It makes sense that I'd feel this way right off the bat with Adefope—not because I'm delusional about becoming friends with interview subjects, but rather because I'd just spent three hours bingeing all of the first season of Shrill, and so was fully versed in Adefope's character, Fran, the ultimate best friend and roommate to Annie, played by Aidy Bryant.

In a lot of shows, the best friend can be a thankless role; they are often there for supporting the main character, and rarely fully realized on their own. Such is not the case with Fran, who is a completely distinct person: funny, fabulous, and flawed, and also supportive of Annie in the way that all friends should be. It's quietly revelatory, seeing a friendship onscreen that mimics the intimacy of real-life best friendships. It's not that Fran—or Annie—are perfect people, but they're perfect for each other, and help each other when they're down, while always striving to be honest about what they see happening in each other's lives.

Though she started her career in live comedy in her native Britain, Adefope has recently been breaking into American television on shows like Miracle Workers, and now Shrill. Below, I spoke with her about the dynamic chemistry between her and Bryant, what it is that she loves about performing live on-stage, and upon which star of The Favourite she'd like to model her career.

The chemistry between you and Aidy is very, very real, which is so important, and friendship chemistry is often underrated compared to romantic chemistry.

Yes. We'd talked about it, and we were like, "This would be so awkward and uncomfortable if we were just two actors reading scripts and, like, going home and never speaking to each other." But I think we're just very lucky. I think we're quite similar, have a lot of similar interests and taste, and we're just very lucky that it was an immediate thing; we get each other, and we have the same sense of humor. We get on.

Had you read Lindy West's book before filming the show?

I read the book in between getting in the audition and getting the part, because I was like, Even if I don't get the part, I feel like I should read this book. I had read Lindy's articles, and I was aware of her work and aware of the trolling that she experienced and stuff.

It's a really fascinating the way this series of autobiographical essays were converted into a narrative, fictional show. It was done so seamlessly.

Yeah, it feels very natural, like it could almost be separate from the book, but also, it's clearly taken from the amazing source material that it has.

What about Fran makes for a particularly exciting character to play?

I like that she supports Annie and has Annie's back and wants the best for Annie, because I think that that's a very real portrayal of a best friendship. But what I also like is that she is flawed and their friendship isn't just like, "Yaasss, queen. You're amazing. Go out there and do it." It's like they get on each others' nerves and they annoy each other—it's just that subtle annoyance, where you really want to talk about and call each other out on bad behavior.

It's quite hard to fully realize lots of characters in a short space of time, but she still is not just a prop to Annie: She has her own family, she has her own relationships, and I really like the fact that she is seemingly this endlessly confident, incredible, but maybe slightly intimidating person.

But also, she is quite similar to Ryan [Annie's imperfect love interest], because she's kind of a misogynist, even though she wouldn't say that, because she's, like, woke and queer and cool. But she doesn't treat women that well, and I just thought it was very cool to have a lot of layers of complexity to the best friend character.

It would be so easy but it would also be so reductive to have Fran only be just the coolest person ever—which she is—but also, nobody is perfect, and it wouldn't feel truthful if she weren't also just a little bit shitty.

Exactly! Yeah, yeah. She's very real and it's a very grounded portrayal of what living with your best friend is like.

How is it working with Aidy?

Yeah, [laughs] I totally get that feeling.

She's the best in the world. She's an angel, and she made everyone feel very comfortable straight away. I was a bit nervous about playing Fran, because I normally play weird characters or people with funny voices or, like, slightly odd quirky characters, and this was maybe one of the first times I've played a very normal realistic naturalistic person.

Did you always know that you wanted to be a performer? Was comedy something that came naturally to you?

I always knew that I wanted to be a comic actress, but I don't think that I necessarily thought, Okay, that is what I will do. It was more just like, That would be an amazing thing to do, and I would love that. But realistically, it's what happened; I just was always doing accents and voices and stuff when I was younger. And I watched a lot of Catherine Tate and a lot of sketch shows and a lot of Mitchell and Webb and a lot of Olivia Colman. And I knew that I wanted to do it, but it just seemed like a very distant dream.

I didn't get into drama school after university. Looking back, I think I was really bad. [laughs] I didn't get into drama school, but I had been to the Fringe Festival in Edinburgh and had seen lots of comedy that I loved and I was like, This is what I want to be doing. So, I started doing open mic—I just went in character. And then I kept going to the Fringe and kept doing more and more gigs and then started doing my own shows. And then got an agent and carried on my way.

What do you love most about performing live on stage?

I think with comedy especially, it's quite a cool, unique thing that you can write something in the day, go onto a stage that evening and perform it fresh for the first time, and you get that response from an audience. Comedy is a cool thing, because, at least in my experience, if you're good at it and people know, they'll find out about you. Whereas I think with acting, you can be an amazing actress and if you don't get the right experience or the right opportunities, then nobody might ever see that you're such a good actress. But with comedy, it's so accessible, there are so many open mic gigs, you can just get up and do it. Making people laugh, I think, is very powerful. People might not necessarily want to laugh and then they do. And it just feels like a very rewarding thing to do to make someone laugh.

There's probably nothing more intimidating than knowing you're just alone up there with an audience full of people, but once you get going, it must be the biggest rush.

Performing a play or a musical or something is obviously an incredible rush, but I don't think you get that immediate response like with comedy unless you get a round of applause or whatever. But I've always thought when people perform plays, How do you know it's going well? Until it finishes and people are giving you a standing ovation, but with comedy [snaps fingers] it's just that immediate thing of knowing that you're doing what you set out to do.

What kind of projects are you most interested in trying out that you haven't done yet?

I think the trajectory that I always saw in my head was: Okay, do loads and loads of comedy and try and really nail it and know that you can do it. And then once you've done that, then you can try out serious acting. Basically, exactly what Olivia Colman's done. [laughs]

What is the number one misconception that people have because you're a comedian?

I think most people when I tell them I'm a comedian, they're like, "What jokes do you do?" And I'm like, "Oh, I do characters, and they are all very weird. I don't tell jokes." And I've had it before where people will be like, "No, just tell me a line that your character says," and I'm like, "It doesn't work like that. It's very limited." I think people just assume comedians are just talking about the news and talking about topical stuff all day and I'm like, "No, I'm doing regional British accents and pretending to be men."

Shrill is streaming on Hulu now.