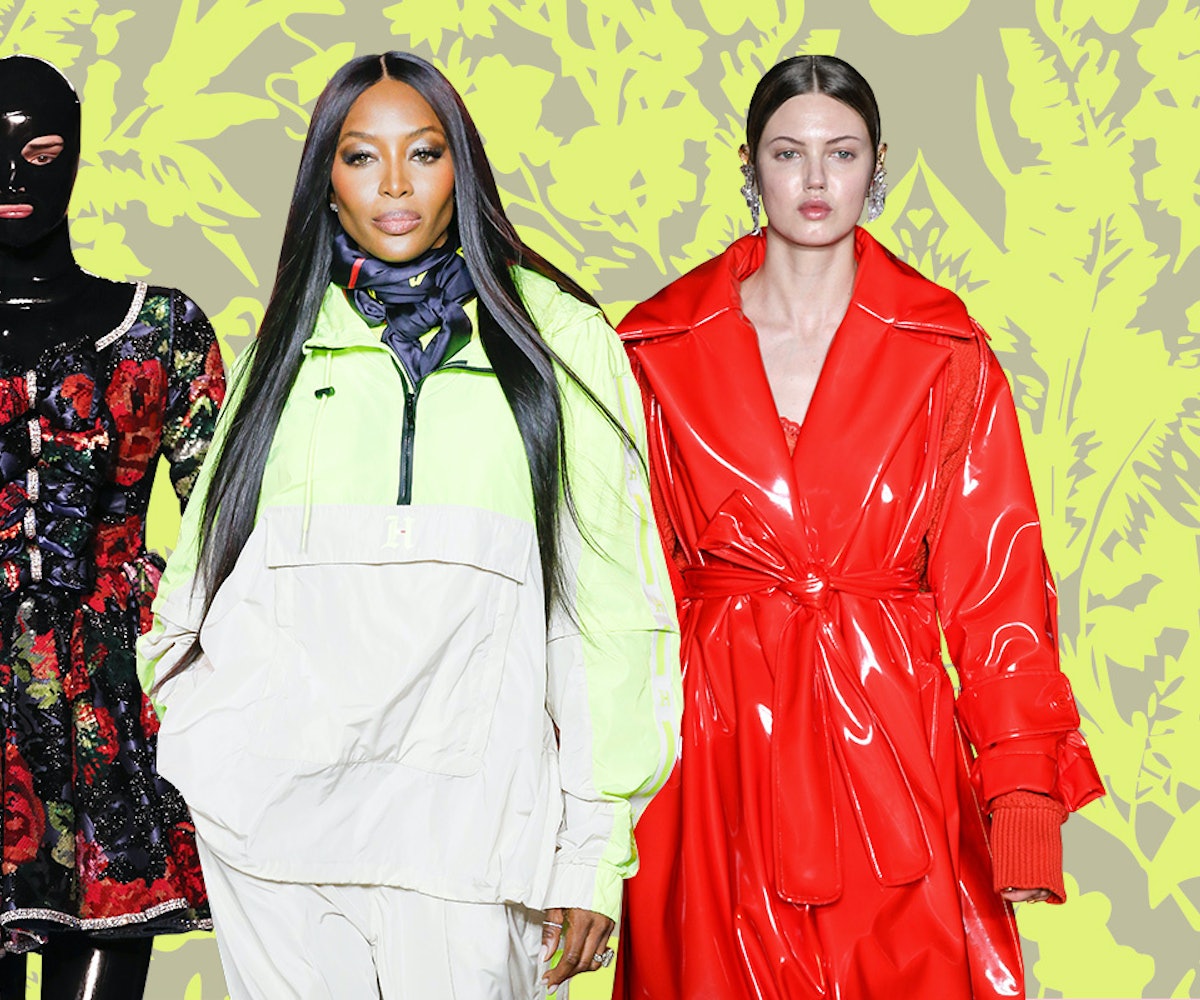 With London Fashion Week coming to a close on Tuesday, we are officially halfway through fashion month — and already have plenty of news, trends, and celebrity sightings to wade through. While New York kicked things off with plenty to talk about, from a surprise Hayley Williams concert at Collina Strada to a late-night party thrown by none other than Rihanna, London Fashion Week Fall 2020 promptly followed suit with its own batch of buzzy moments.

Though London may be the shortest of the four cities, with just five days of shows, what it lacked in length, it more than made up for it in plenty of content. The week kicked off with emerging Londoners Ashley Williams, Charlotte Knowles, and Matty Bovan, who all showed edgy new collections that are sure to be a hit with the cool kid set in East London and beyond. On Monday, a trifecta of more veteran local heroes — Erdem, J.W. Anderson, and Christopher Kane — showed some very impressive collections, which we're guaranteed to see on the red carpet and magazine pages in the months to come.

Of course, one of the biggest shows of the week came not from a Brit, but one of the most quintessentially American brands, showing in London for its second time in three years: Tommy Hilfiger. On Sunday evening, Hilfiger showed his latest collaboration, this time with race-car driver Lewis Hamilton, at the Tate Modern, where the pair also debuted a surprise mini-collection with singer H.E.R.

Below, all that and everything else you missed from London Fashion Week Fall 2020.

Lena Dunham Has Her Runway Debut

Lena Dunham has accomplished plenty since her breakthrough debut with Tiny Furniture (and, more famously, Girls), but on Friday of London Fashion Week, she checked off a new box: walking the runway. Dunham made a surprise appearance at 16Arlington, the brand that also made her premiere dress for last summer's Once Upon A Time... In Hollywood. "When my friends at 16Arlington asked me to walk the runway, I basically yelled 'YES WHEN!?'" she posted on Instagram post debut.

For a few seasons, you couldn't attend a runway show without seeing Lindsey Wixson and those famous lips. But in July 2017, the American model announced that she would retire from the runway in order to focus on her pottery. Since then, she's slowly made her return back to the field that made her famous, but perhaps no season more so than London Fall 2020. After skipping New York altogether, she made a whopping five appearances in London, including Erdem and Tommy Hilfiger.

Speaking of Tommy Hilfiger, no runway show was as star-studded as the designer's big London moment. Where do you go when you have the one and only Naomi Campbell open? In this case, a cast of well-established supermodels (Candice Swanepoel, Alessandra Ambrosio, Karen Elson), new-gen Instagram celebs (Luka Sabbat, Jasmine Sanders), and famous scions (Lottie Moss, Georgia May Jagger, Mingus Reedus).

Think a little rain is going to drive the fashion set to break out their Doc Martens? As if. Over the weekend, Storm Dennis touched down in London, a miserable rain and windstorm that's being described as the second strongest nontropical storm on record in the North Atlantic Ocean. And yet, there still was plenty of suede, heels, and other impractical accessories parading down the streets. Anything from the 'gram.

Richard Quinn has quickly become one of the most anticipated shows of London Fashion Week, and this season was no exception. The designer closed Saturday with a late show that made up for its tardiness in edgy, memorable designs. Among the biggest takeaways? Latex, latex, and more latex. Buy your baby powder now.

Mainstream is certainly not the first word that comes to mind when you think of Margiela — which is what made MM6 Maison Margiela's collaboration with North Face all the more cool. During the brand's rave-like presentation, models walked in new takes on The North Face's Expedition System outerwear, reimagined in more traditionally edgy MM6 styles. If you see an influx of finance bros taking interest in Margiela, this is why.

On Monday night, the most popular party of fashion week wasn't a fashion party at all. Instead, the place to be was a private VIP preview of photographer Renell Medrano's new exhibition, Pampara — her first solo U.K. show. Coming out to support were some of her famous friends, including Bella Hadid, Kendall Jenner, A$AP Ferg, and Tyler, the Creator.