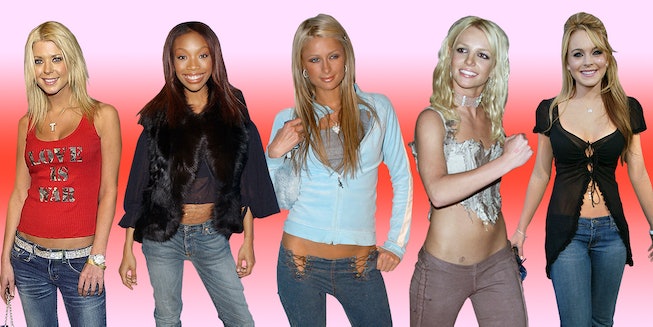 By now, you've probably read The Cut article that predicts a very terrifying future: the coming rise of low-rise jeans (no pun intended). Even if you missed the article, which claims that the trend will be fully back by 2020, you've probably read the billions of tweets fighting against this looming fashion apocalypse.

Maybe you don't see it as such a bad thing? Maybe low-rise jeans bring back fond memories of Paris Hilton, Britney Spears, and other stars of the early aughts all donning practically vulva-baring denim along with their perfectly toned six-packs? Don't let nostalgia trick you! This is an awful trend, and we should fight against it.

Frankly, nothing about the fashion of the early aughts deserves to make a comeback, but things like tiny sunglasses and the return of the Juicy Couture tracksuit are innocuous because they don't require you to put a huge swath of your body on display and make sitting complicated—unless you want to bare half your butt. (There's a reason why, way back in 2003, low-rise pants were called out for being misogynist.)

While this look might make sense for Bella Hadid and Kendall Jenner to wear, that does not in any way mean the rest of us need to buy into it and sacrifice important things like sitting down comfortably, having the ability to tuck in our shirts, and not feeling overexposed after eating a large brunch. Just remember, "pulling it off" is a myth to get people to buy ugly trends. Don't succumb! We're all in this together, and it's only together that we can defeat the return of low-rise jeans.