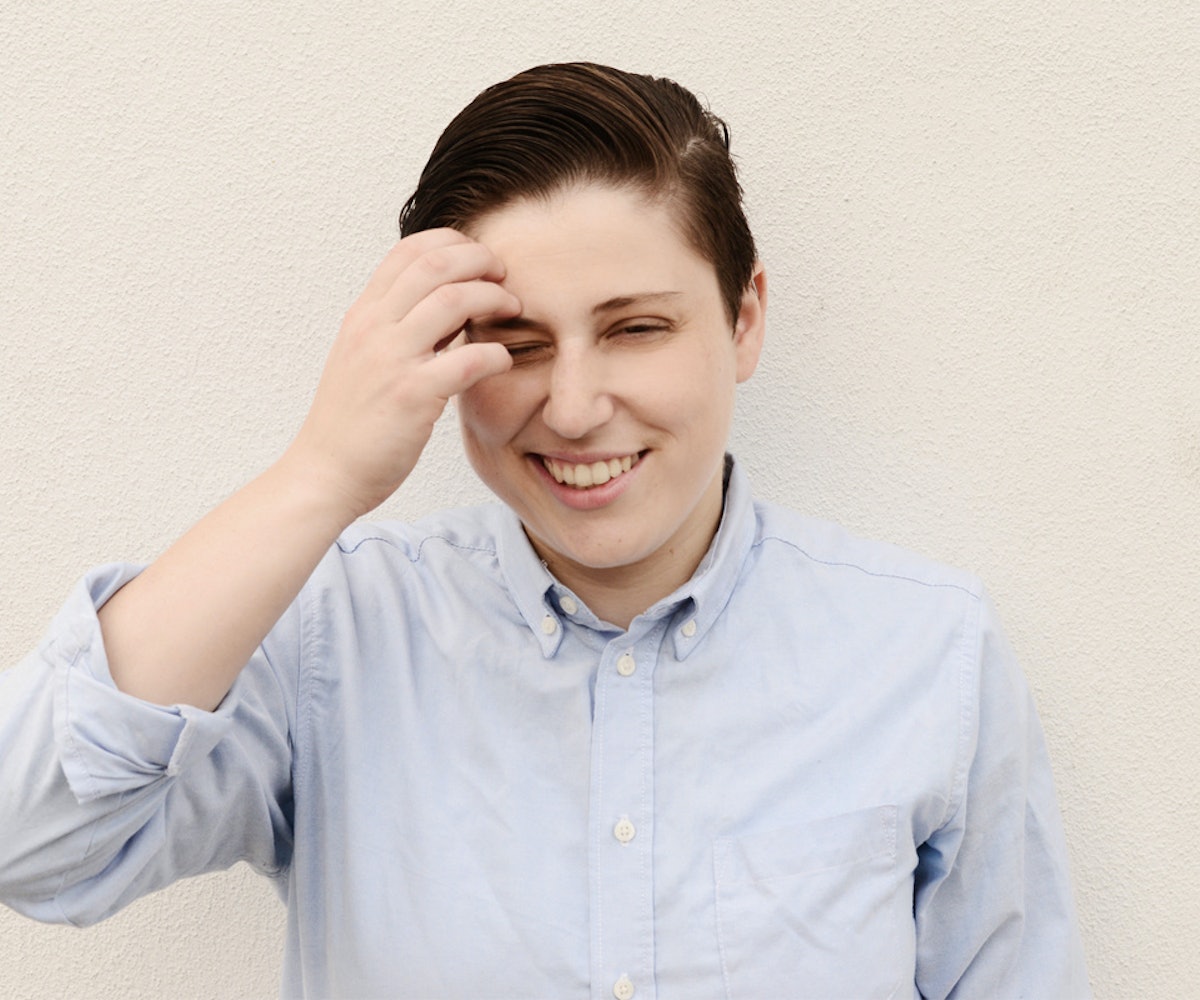 When Mal Blum and I sat down for lunch in Brooklyn, they warned me to stop them if they get off track.

"I will derail you," they laughed. And Blum's not wrong—over the course of our chat, we verged into detailed discussions of the music industry at large, our respective Passover seders, and our poetry teachers. We also spent a solid 20 minutes talking to the pair beside us—one of whom recognized Blum—and with whom Blum discussed the best top surgery doctors in the city.

Their newest album, Pity Boy, out today, was written over four years, during which time Blum came out as transgender, had top surgery, and navigated a number of "terrible romantic decisions and great personal decisions." Their songs explore their tendency toward harmful relationship dynamics, self-destructive habits, and the intersection of identity and invisibility.

"This record is less about depression and more about patterns of behavior and relational dynamics—romantic, family, friends. These patterns can be sort of benign and laughable, but can also manifest in terrible ways," Blum told me. "I don't think it's bad to give, but when it's to your own detriment or when it's not giving so much as [it's] doing things that make you uncomfortable, that's when that becomes a problem. You learn that it's safer to make yourself smaller, to put other people before you, and I think part of growing into myself is learning to not do that anymore."

That much is obvious on tracks like "Not My Job," where Blum sings, "If I have to/ I'll kill off my better self/ Because it's not my job to make you well"; and on "Odds," where they acknowledge that "All that I want is for someone/ To take advantage of me/ Because I don't know any other way."

Blum is fed up, that's clear. But while Pity Boy is an indictment of others' cruelty, it's also an acknowledgment of Blum's own missteps. The result is an utterly human, sardonic, and pseudo-masochistic record that oscillates from accepting abuse to deciding stubbornly, "I don't want to/ So I won't."

Many of us have suffered from having a perhaps too-altruistic spirit—Blum and I both have stories about giving away our lunch at school, leaving nothing for ourselves. The solution is to allow a bit of selfishness, so you yourself don't go hungry—"I'd rather be a bad person than not survive this, not to be dramatic," Blum said to me—and announcing your value as an individual.

"I was on tour with somebody, and a lot of her fans would come up to the merch table and be like, 'I loved your set,' and then they would say something aggressively misgendering me," Blum said. "I was feeling like, How can you be liking me or taking something from me when you don't even see me for who I am?"

Part of this invisibility, highlighted on "See Me," has to do with Blum's personal experience, but it also reckons with visibility in the LGBTQ community at large. While Blum emphasized that there's no single "transgender experience," being transgender affects how they view and walk through the world.

"[Visibility] is a bit of a double-edged sword in the trans community, because it's the more visible of our community members who are often subjected to violence—usually black trans women—so visibility in a certain sense can be dangerous," Blum said. "In another sense, for members of our community who people are unaware of or can't find each other, then visibility can be powerful for them. I have always only ever wanted to find and connect with other people who feel the way I do, whether that's in a trans sense or beyond."

It seems younger listeners, who sometimes trail Blum's age by a full decade, have sensed Blum's propensity for connection; they often reach out to Blum through their Tumblr Ask inbox, asking for advice regarding mental health struggles. Blum answers as often as they can, provided they feel they can provide insight; they told me that "as a kid, the gay internet [probably] saved my life."

"As I get older, I'm trying to think, What do I want to do with music and what role do I want to play, especially with these younger fans?" Blum said. "I want to transition into an elder who is here for people on some level, whatever that may be."

Though Blum has an intimate connection with young fans through providing such direct support, they've found they have a young audience elsewhere: on TikTok. Blum told me that their song "New Year's Eve" off of 2010's Every Time You Go Somewhere has become a meme, usually involving a breakup wherein the person packs up items in a box and puts them away. Blum said they've seen 400,000 TikTok videos using their music.

"Then these TikToks make an Instagram, then they have 400,000 followers, and on one hand, I should email them and be like, 'You should credit me,' but then, on the other hand, if you look at the comments... it's teenage boys being like: 'What's this gay song?'" Blum said. "All this to say: If [Pity Boy] gets some attention, which I'm not super used to, I'm going to need to find a way to set my own emotional boundaries around that sort of criticism."

While Pity Boy is intended to be a wry title—like "oh, poorboy"—Blum's album invokes sincere sadness alongside its punchy rock. When pressed, Blum compared the record's overall sound to a getaway car.

NEXT UP
Life
Channel Tres Brings The Mellow To Miami
Life
In Praise of the Gossip Girl Choir Performance of "Glamorous"
Fashion
The Best Clear Bags For Concerts That Won’t Ruin Your Outfit
Life
What’s Going On With Record Labels and “Viral” TikTok Moments?