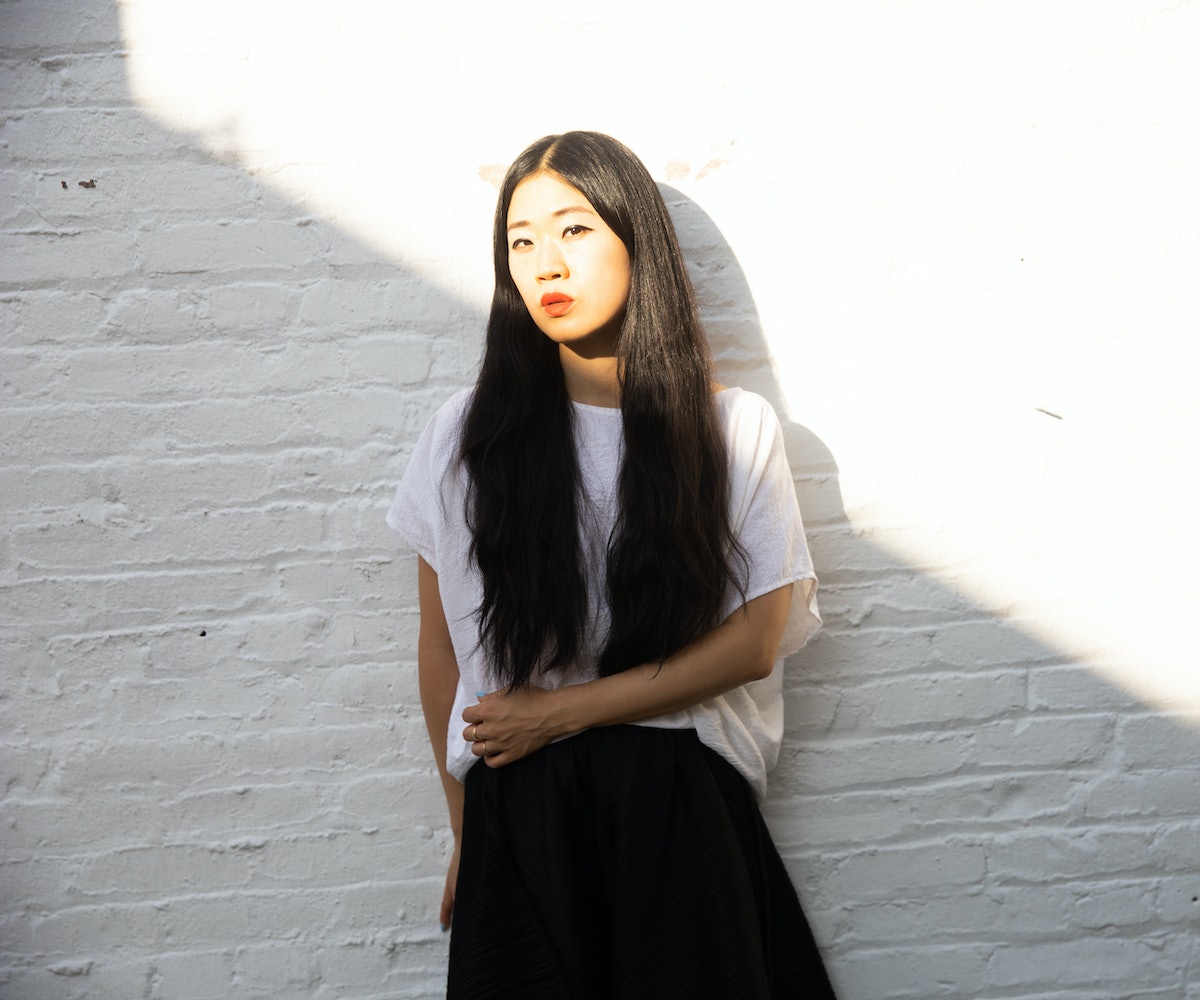 "I don't have the kind of muscle memory where I'm like, Yes, I wrote a hit," Mary H.K. Choi told me when we met to discuss Permanent Record, her second novel, which follows last year's New York Times bestseller Emergency Contact. "I'm not some Swedish pop song maker where I'm like, There's the hook and this is the build and this is the bridge," Choi said. "I don't have that... There's nothing in my second book that makes me feel like I've done any of this before. There were times when I was sitting down to write, I was like, I don't know how to do this."

And yet, people would be forgiven for thinking that this isn't the case, and that writing comes as naturally to Choi as pairing bodega-bought snack foods does to Pablo and Lee, the main characters in Permanent Record—that is, very. People would be forgiven, because, with each of her novels—and then too with hermanyviral articles and her perfect mini-podcast—Choi creates such recognizable, fully realized worlds that you can practically feel her words pulsing; everything feels so humming, so alive.

Permanent Record doesn't just hum, it thumps like a heart, and maybe that's because it is a book about love: romantic, familial, and, ultimately, self-love. It's a coming-of-age story for all of us who can't believe we're supposed to know what to do with our lives once we hit 18. It's about figuring out who you are on the inside when you spend most of your time making sure your outside appearance looks okay to everyone else. It's about realizing that nobody is thinking about you as critically as you're thinking about yourself. And it's about accepting that your life might never look like you thought it would, and that it's okay if you need some time to figure things out.

"We talk about Saturn returning as this big thing," Choi told me. "But the reason why these two books have been about life after high school is that there is this expectation that you're supposed to have something figured out... You're supposed to be in this place. It's been sold to you as this fecund terrain where you're able to optimize all the opportunities that are available to you and harness this very specific power, because college is supposed to be this portal to your future. So, if you're not latching correctly, you're just in there panicking, like, by existing with an uncertainty, you're squandering something." Choi finished, "That's certainly what Pablo is experiencing. That's something that, existentially, I really wanted to talk about."

Pablo Neruda Rind doesn't know what he's doing with his life: He has steadily mounting debt, a complicated relationship with his divorced parents, couldn't make it through NYU, and the brightest spot of his life is a snack-themed Instagram account he runs anonymously. So, when, late one night, international pop star Leanna Smart walks into the bodega where Pab works and buys a variety of snack food (who wouldn't bond over gummy frogs and sour peaches and Ritter Sport chocolate bars?), and they forge an instant connection, who can blame Pablo for falling hard, and maybe allowing himself to think that Lee might provide an escape from the seeming quicksand of his own life?

What follows is a poignant, funny, all-too-real depiction of what it means to fall in love with someone who has to deal with the exigencies of celebrity; a meditation on the difficulties of navigating the fractured identities so many of us have; a look at how having free-floating ambition and seemingly endless opportunities can paralyze all but the most self-assured of people; and an interrogation into the idea of success, and what it means in the age of social media and rampant celebrity, when it always seems like people you do and don't know are light years ahead of you in every realm of life.

Pablo is grappling with all these things; he's caught in the very modern conundrum of having been told that he could do anything with his life, it's just up to him to choose what. And while that might sound appealing, the idea of not having to walk a set path, it's actually, you know, straight-up terrifying. "Anxiety is the dizziness of freedom," Choi said, as we talked about how scary it is to have to forge our own paths. "We think that all these barriers to freedom and self-expression are so lowered because of technology, and I'm just here to say, sure, but on the other hand, at what cost?"

It would be understandable, then, if Lee were a total cipher, just a symbol against which Pablo compared himself. And yet, no doubt in part due to the fact that, in her career as a journalist, Choi has profiled everyone from Demi Lovato to Charlie XCX, Leanna Smart is a fully realized character—yes, she's enigmatic and not truly knowable, but that's inherent, not incidental. Choi imbues Lee with real intelligence and humanity but also makes clear that this is a powerful woman with real ambition, who will do what it takes to keep her status in the ephemeral world of the ultra-famous. Choi told me that, even though being a celebrity—and particularly a female superstar—means living in a set of "golden handcuffs," still, "I love celebrity in 2019 and the specificity of it, the long tail of it, the fact that it seems to me that now more than ever, if you were once famous, there's a lot of ways for you to keep ginning that. I really am fascinated by the power they wield, and I'm also really interested in all the unseen hands that contribute to this giant reality distortion field that celebrity actually is."

But, Choi made clear, it is hard to be a famous woman: "The golden handcuffs thing is so real. You read about these women who couldn't find time between their private jet, the interviews, the meet and greet, and the stage where they could pee. They can't even pee."

And yet, the whole not being able to pee thing is rarely what most of us dwell on when we think about celebrity, and when we think about success—which is exactly why we get caught up in our dreams and ignore the more mundane choices we need to make to just get to the place from where we actually might be able to find our own path to success, no matter how humble our achievements might ultimately be.

"That's the thing, too, about contemporary society," Choi said. "The metrics are so hard-core now. It's like every record is beaten by a compound of a trillion, it seems... That's the thing about visualizing yourself in terms of these benchmarks of success. If you're constantly waking up every day and practicing your Oscar acceptance speech: (a) how can you ever be happy doing anything other than winning an Oscar that day? and (b) what are you really going to do today—actually going to do today?"

In Permanent Record, it's Pablo's family—specifically, his father, Bilal, an Ivy League-graduate who, to Pablo's embarrassment, is now pursuing his passion for playwriting—who ultimately keep Pablo honest about pursuing what he loves—and also taking the time to figure out what that is. Choi explained, "The question that Bilal asks Pablo, is like, 'What do you like doing?' It is amazing to me the infrequency with which we ask ourselves what is it that we like, what is it that we enjoy, what is it that we can't live without. It's always something to do with an optimized path. It's always about what you can convince yourself you could be good at fastest or better at than everyone else."

For Pablo, who, Choi pointed out "didn't really know how to square certain aspects of his culture or the fact that he doesn't speak any of the languages with his identity [Pablo has a Korean mother and a Desi father]," the answer to what he loves and what he's good at is in his hands—literally, as, in page after mouthwatering page, we read descriptions of the fusion snack foods he creates, melding different cultures into singularly delicious compositions. Choi said, "He doesn't become aware of until later, but he's so confident and fluid and really comfortable in his identity expression through food."

It's always interesting to see how someone else can change their life by not actually changing that much, but rather by recognizing what's already there; this is what Choi captures so beautifully in Permanent Record. She said, "It's like when an expectation you had didn't work out and you need to find an alternate route, and hopefully you can apply what you learned and the data from something not working out to the next decision you make. That's actually life. That's not a character flaw. I just wanted a book that really questions that and interrogates, Okay, if everything is over and you're still alive, what's next?"