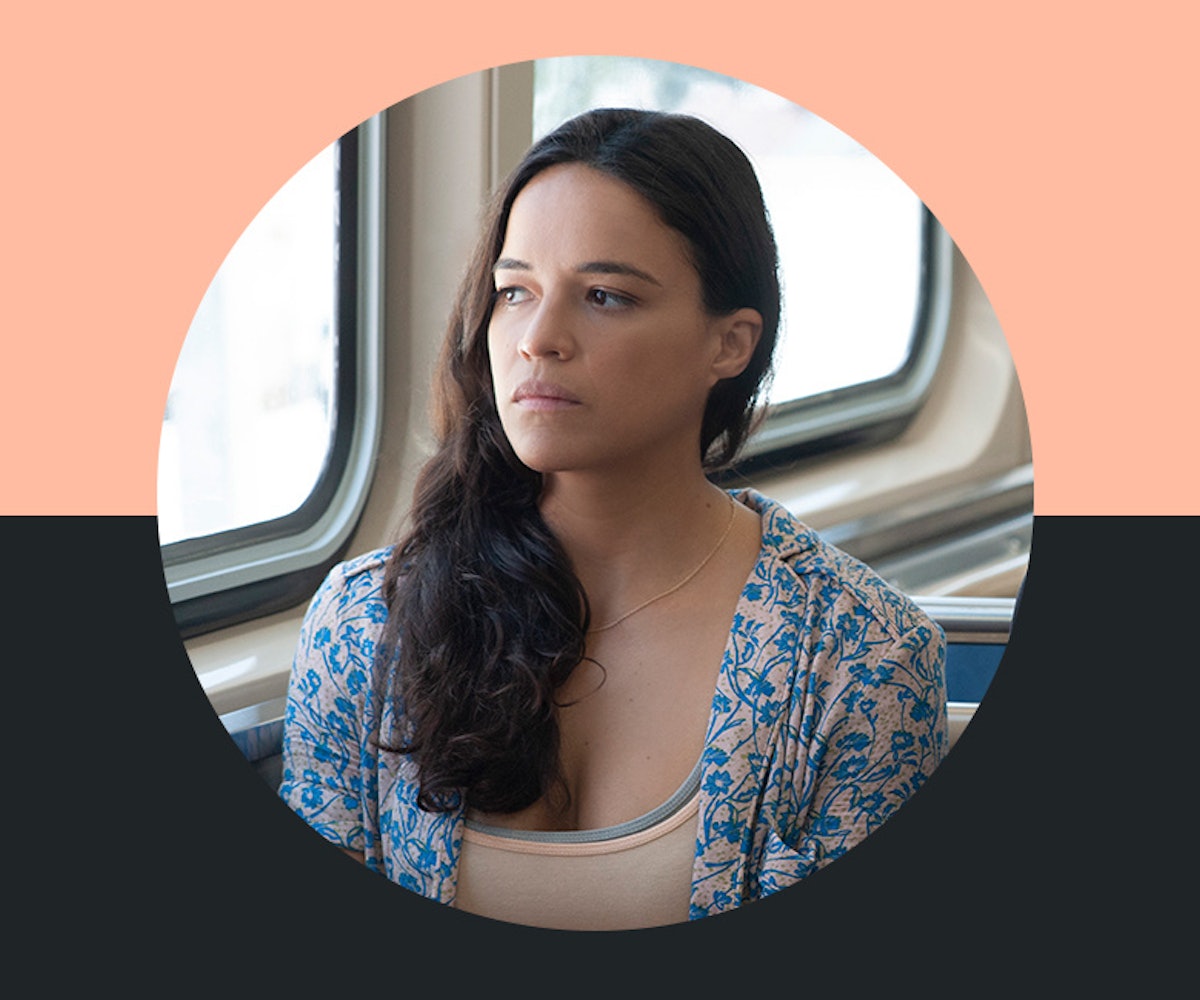 Michelle Rodriguez started her career throwing punches. As a hardscrabble Brooklyn boxer in Karyn Kusama's gritty indie Girlfight, the Latina actress exploded onto the scene like a thunderbolt of female empowerment. In the years since, Rodriguez has become as well known for her unfiltered perspective on Hollywood as she has for playing a brassy action hero in films like Avatar,Machete, and the Fast & Furious franchise.

But despite all her professional triumphs, Rodriguez has been critical of her industry's lack of inclusivity, particularly when it comes to women and people of color. She was especially candid in 2017, after the release of The Fate of the Furious. In an Instagram post that rippled through Hollywood, Rodriguez threatened to leave the franchise if it didn't "show love to the women" in its subsequent films.

A year later, Rodriguez found exactly what she was looking for in Widows, a deeply engrossing heist thriller featuring four complicated women at its center. Directed by Steve McQueen (whose last film was the Oscar-winning 12 Years a Slave) and with a screenplay by Gillian Flynn (author of Gone Girl and Sharp Objects), Widows delicately straddles the line between high art and popcorn entertainment, seamlessly weaving white-knuckle car chases and shootouts with deft commentary on race, class, sex, grief, and politics.

In it, Rodriguez plays Linda, a small business owner who joins a group of women (led by the indomitable Viola Davis) who turn to a life of crime after their husbands are murdered in a botched robbery. Since premiering at the Toronto International Film Festival in September, Widows has been hailed as a bold revenge story for the #MeToo era. Though Rodriguez dismissed that characterization when we caught up with her on the eve of the film's world premiere, she did dive deep into our current socio-political moment, and the role that movies play in defining it. It was a fiery, frank conversation, and proof that nearly two decades after Girlfight, Rodriguez is still throwing punches.

This is a relatively commercial film, but it also has something to say, specifically about race, gender and class. Is that part of what appealed to you?

Yes, and by the way, I'm really saddened by the decision by the Academy not to give away an award to the most popular film.

When we did the last Fast and Furious, there was a part of me that was really appalled at the fact that we shot a mother in front of her newborn child and the MPAA didn't go crazy. A part of me died then, the part of me that had belief that there was a community that really cared about the fact that Hollywood has an 80 percent penetration rate around the world, that its images impact developing cultures more than we give them credit for. A lot of the decisions that people make in their lives, in these developing countries, have to do with what they believe. Look at conspiracy theories, look at fake news. All of these things are images from pop culture that aren't being curated. This generation, we're the generation of disillusion. You look at anything from our art to pop culture to porn, and you can see this sense of a breakdown in the consistency of foundation. I feel that giving an award that's so prestigious to the movies that are having the most impact around the world is a fucking duty. It's not even a privilege. It's a fucking duty.

I think a lot of people were worried that a "Popular Movie" Oscar would ghettoize movies like Black Panther instead of elevate them.

I understand these things. And I understand that the art form is protecting the integrity of great thinkers. But you're preaching to the choir. The academy is promoting movies for a few thousand filmmakers. Compare that to billions of people around the world, who are being impacted in an unquantifiable way. I really feel that integrity would return to that commercial global stage if there was an incentive like an award so prestigious that the writers would think twice before writing dumb lines, before thinking that the audience is stupid. They would push that line of intelligence with their audience.

Is that why you felt so drawn to Widows?

What really blew me away, especially about my character, is the fact that I was tired of seeing women who get stepped on. I'm tired of that storyline. I grew up with that storyline, of women who love unconditionally, and who are stepped on by their husband, and who have to raise the kids alone. I'm like, "Dude really? Aren't we done with this already?"

So when Steve approached you for this role, were you immediately on board?

He actually got mad at me because I said no! For me, it's never about working with god, it's about, "What am I doing for god? What am I doing for this prestigious person?" Being in the presence of a prestigious person is not going to change my position. My position is, "What am I doing here?" So I said no because I hadn't met Steve McQueen. If you don't meet this man, then you don't know what the fuck you're talking about, and you're an idiot. So basically I was ignorant. Then I met him, and he talked to me, and I was blown away.

I've been told that the first thing you notice about Steve is the size of his heart. Is that something that struck you as well?

I just opened up for him. I wanted to lay my soul on the table for him. Because it comes from a warm place. It comes from an artist with a real good intention. It comes from kindness. And it also comes from unconditional love, and it's rare for a man to have those qualities.

He's got an open heart, and he really cares, and there's integrity behind the persona.

The film has been described as a revenge tale for the #MeToo era. Is that something that resonates with you?

I get that, but I think it's tainting it, because, to be quite honest, I feel like the message to me in this film seemed to be the soft power in the intention of women down this chain of socio-economic subterfuge. It's a power grab for the males. It's all about the acquisition of power and the command and control, and if you notice the intention of the women, it's very similar to what Muhammad Yunus discovered when he did microfinancing around the world. He got all that backlash from all these established men who were like, "Don't give money to the women, what's wrong with you?" And meanwhile, he proved that by giving money to men, you got 60 percent return on investment—they were investing in gambling, in hookers—and what were women doing? Putting their kids through school and taking them to the doctor and providing for the house and paying their fucking loans back! And it's like, "Guys! Come on! You're in a developed country."

So that's what this film is about for you.

Yes! Chicago is a metaphor for the developed world's psychosis, because that's what it is. It's a patriarchal psychosis where it's non-inclusive. There's no sustainability there. You need to let the women in so that you can have some sustainability so that at least you're taking care of the kids and you're taking care of the family structure and humanity is back intact. Your soul is intact. Not just the outside, not just this idea of your image, your immortal fucking sign on the street, or your amazing homes. That doesn't mean shit if you don't have love.

Do you feel like this film, which is anchored by women, is a sign of progress in Hollywood and beyond?

It's part of an evolution that's already happening. That march in 2017, those men and women that were joyfully, gleefully walking the streets with smiles on their faces, helping little old ladies cross the street—that came from a place of love, and that will conquer all this hate. I promise you. I felt the sizzling of it.

That guy can't become president and not have there be some backlash.

Is Trump something that you discussed on set?

Not really. Ain't nobody got time for that.

Do you choose projects as a way to articulate how you feel about certain issues?

If you one day wake up and realize that it's only been less than 100 years ago that women really started writing books under their own name, that if you walk into museums and 95 percent of what you see is an expression of what men think the world is, the idea that mankind is a world, not humankind, not humanity, not the other 50 percent that make it a complete system—there's an imbalance. A social imbalance, a societal imbalance. The infrastructure isn't even. Until there's more inclusiveness—and it's not something that's just given—it's a teamwork effort, it's a shift of consciousness that needs to happen. We're living in a cosmopolitan, globalized society in the developed world. To deny that is stupid. Black Panther proved it with box office. Many features are proving it with women. All of these supposedly disenfranchised humans are expressing themselves in ways that weren't possible 50 years ago. Even 15 years ago! I'm looking at this now, and I'm like, Damn I wish I was about 20 years younger because I'd be killing it!

So in some ways Trump's election was a good thing?

That's the only good thing about it. Even Weinstein wouldn't have happened had Trump not been elected. That's why I'm kind of grateful for it to be honest. I'm like, "Yeah, dude! You got us all fired up!"

Widows is out in theaters on November 16.