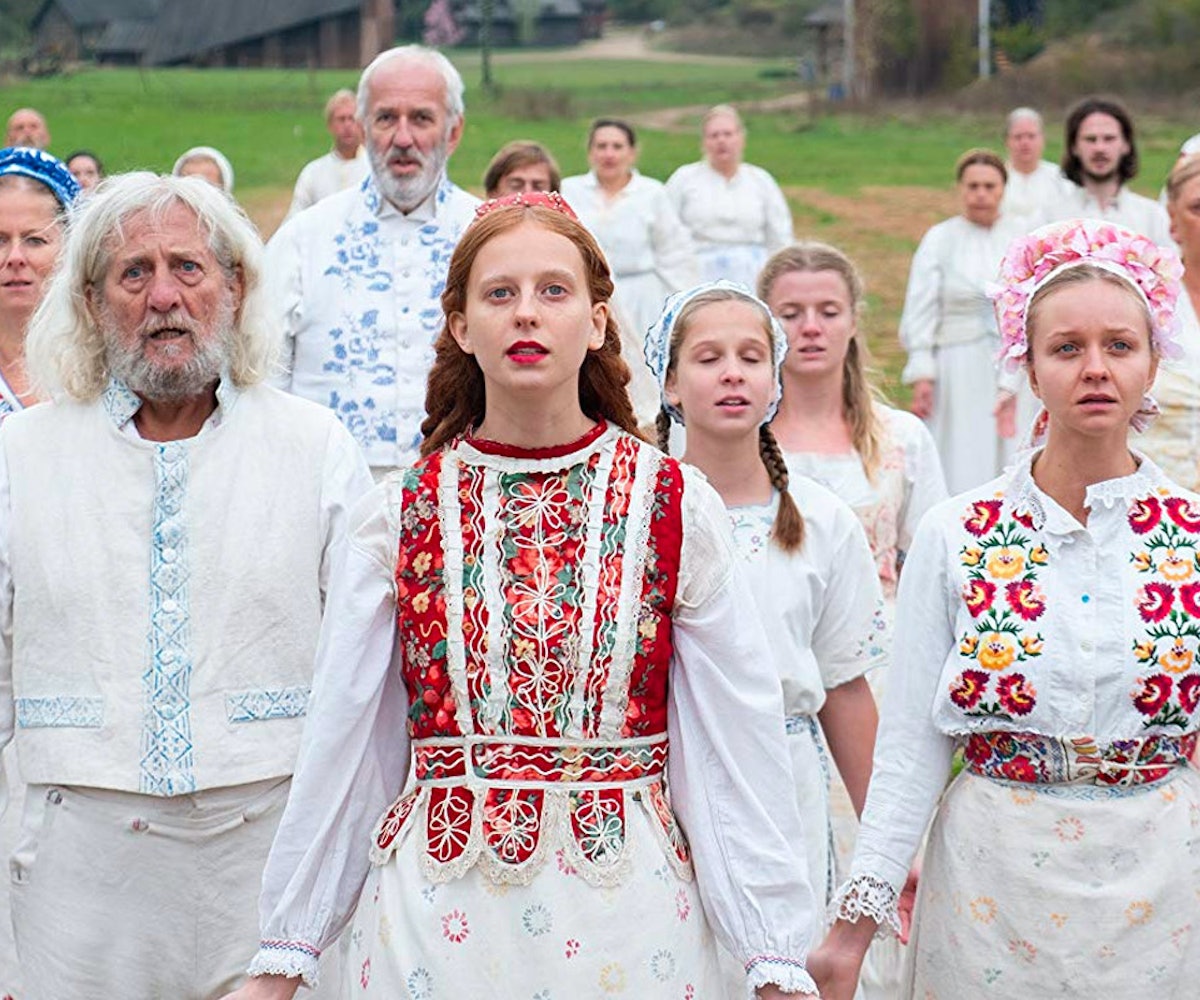 A summer movie season like this one, where non-Disney sequels are bombing just about as fast as Hollywood can release them, can potentially create even more hunger for alternatives to the usual deluge of brand-name tentpoles. Sometimes this comes in the form of offbeat arthouse fare, or in the form of semi-retro exploitation pictures—smaller-scale horror, thriller, and action movies that aren't automatically larded up with CG zap effects. Or sometimes they can come in the form of both at once: Ari Aster's Midsommar, which opens in a bullish wide release on July 3, is both an arty mood piece and a dread-filled horror show with some truly gnarly gore.

Lately, the term that's been bandied about for this kind of hybrid is "elevated horror," inspired by movies like It Follows, The Witch, and Aster's own Hereditary, which came out last summer. But horror has always had a classier side; to pretend that it's just recently been "elevated" by some stylish slow-burners involves a real misreading (or lack of reading) of film history. Moreover, there's something about Aster's two-movie oeuvre so far—maybe it's the aforementioned gore, or the dark humor, or the willingness to push further past the boundaries of good taste than other contemporary horror pictures—that lends it some exploitation-movie aggression. A movie like David Robert Mitchell's It Follows may feel more like a classic exploitation setup—the premise involves literally fucking your demons away—but its characters feel rooted in a kind of dreamy, melancholy reality. Midsommar has some terrific performances and laugh-out-loud moments. It also regards most of its characters with the pitiless detachment of a slasher movie.

As with Hereditary, the horror starts on the normal human scale of everyday tragedy (albeit a slightly more amped-up version), as a devastating family death leaves Dani (Florence Pugh) shaken and grief-stricken and holding on to any remnants of her normal life, especially her boyfriend Christian (Jack Reynor). Christian is first seen mulling a possible breakup, over pizza and light drugs with his fellow college-aged buddies (Will Poulter, William Jackson Harper, and Vilhelm Blomgren). Dani's tragedy forces him to modify his planned ramping up of boyfriendly neglect, which was to involve maybe ditching Dani for a boys-only summer trip to rural Sweden. Instead, he invites Dani along, and suddenly, in a single masterful cut, Dani goes from trying to contain a breakdown in an apartment bathroom to trying to do the same in an airplane bathroom.

The kids are visiting the remote commune where their buddy Pelle (Blomgren) grew up; he's invited his friends to participate in a rare, mysterious, weeks-long mid-summer ceremony that only occurs every 90 years. This involves taking hallucinogenic drugs, sitting for communal meals, sleeping in buildings divided by demographic (the under-36 crowd is all in a single bunker), and being some of the only people for miles not dressed in gauzy white. Will there be more to this cult, er, commune than first meets the eye? Or does that question not even really qualify when the sect looks pretty creepy, despite all the smiling faces, from the jump?

Aster and his cinematographer Pawel Pogorzelski shoot the Sweden scenes with a steady, unnerving serenity; there are long pans and occasional symmetrical compositions that bring to mind Wes Anderson, of all people, as if Anderson was directing material intended for Eli Roth. That might sound like a shamelessly contemporary comparison (and doubtless Aster has loftier intentions), but there are hints of Roth's Ugly American sorta-satire as Aster broadly telegraphs the self-involvement of pretty much everyone in except Dani, but especially the neglectful Christian. (At a recent Q&A, Reynor spoke about wanting to play Christian as a multi-dimensional person, and Aster alluded to a slow-burning reveal of how selfish the character is, neither of which really comes across on screen. Some of the movie's biggest, earliest laughs come from Christian being a terrible, terrible boyfriend, suggesting less of Hereditary's domestic horror, and more of a relationship tragicomedy.)

Throughout, dread hangs over the proceedings, which are both bright and desaturated, to better emphasize the blinding cult whites. It's not the heavy, contorting dread of Aster's previous film; it's more disciplined than Hereditary's free-form freakouts, but also more traditional. Even within those confines, the effect is impressive: Aster can show as little as a rocky cliff or a brief scene of food preparation, and with barely any more context, you brace for the worst. Sometimes it arrives, sometimes it doesn't. And the movie continues, long enough that it starts to feel like Aster is rambling on, maybe even delaying arrival at his ultimate destination because getting there quicker would make the movie feel more predictable. Which it is: More predictable than Hereditary, but arguably better-crafted.

Hence, a movie that feels like a hybrid of arthouse horror and multiplex exploitation—not a bad combination, but this particular cocktail muddles Aster's ideas. Midsommar seems to have more on its mind than, say, Luc Besson's Anna, his latest waif-as-deadly-assassin picture, or the killer-doll remake Child's Play, or, I'm guessing, the hurricane-plus-alligators mashup Crawl (as yet unseen by me, but highly anticipated, trust me). Loftiness or lack thereof doesn't indicate a movie's intelligence or worth, of course; the Child's Play remake, mercenary and tonally uneven as it can be, tries to evoke some contemporary anxiety over children wielding shockingly powerful technology. Even the fairly stupid Anna, a multiplex spy thriller seen by very few people, is, if nothing else, uncomfortably revealing about its director, who specializes in ass-kicking heroines and has also been accused of sexual misconduct by multiple women. Here, he has made a movie about an ass-kicking waif who is exploited by both the KGB and a modeling agency. Anna's value as entertainment and its fascination as discomfiting psychological profile are impossible to separate; it's the kind of B-movie that a better or more self-aware director might well have made less interestingly than that dope Besson.

Midsommar doesn't have to rely on low expectations or psychological profiling to feel more respectable. At the same time, I'm not quite convinced that Aster, a wonderfully talented technician, has made a movie that rises above genre exercises. The movie, at least, feels more convinced than I am. Certainly, Midsommar can be scanned for complicated readings. There's anxiety about suicide, a sense of desperation that half-explains the appeal of a well-organized cult, and a sense that some characters are being deliberately punished for their self-involved sins. There's also sense that Aster is skimming his surfaces, hoping the very act will indicate hidden depths. Pugh is terrific as Dani, but the character mostly feels like the sum of her tragedies major (the death in her family) and minor (the terrible relationship that wastes her time). Is she a portrayal of all-consuming grief, or is she a basic horror-plot cipher?

It may not matter; Pugh's performance and Aster's filmmaking demand attention, even if they don't necessarily hold up to much scrutiny. But maybe that wide release is A24 admitting what Midsommar is after, even at a protracted 140-minute running time: another quick kill, albeit an impeccably dressed one. This summer, that might feel like more than enough.