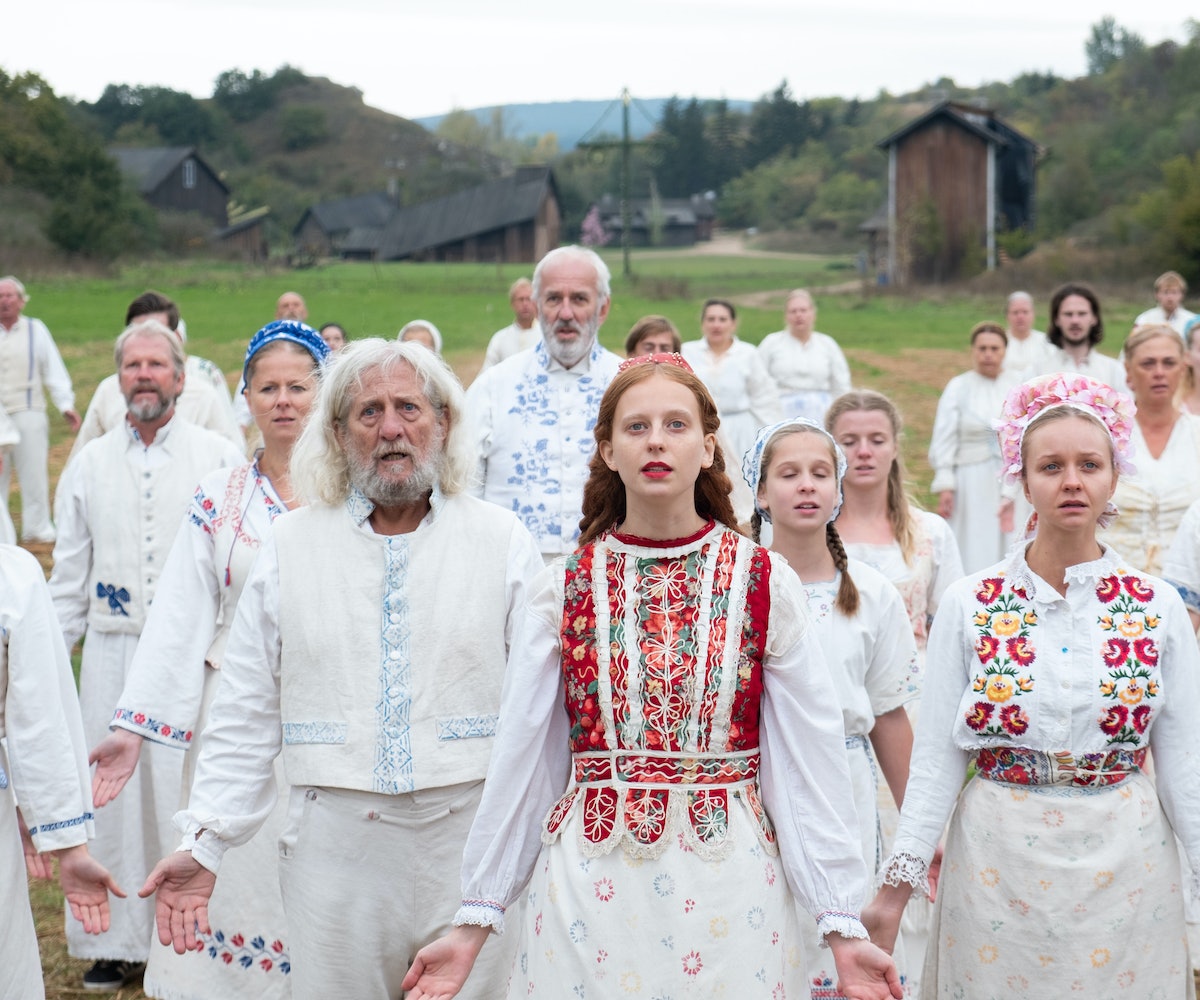 If you haven't seen Midsommar yet, you might be scratching your head trying to figure out if it's really a horror film. The answer is yes—definitely—but I understand why you're confused. Midsommar doesn't look like any horror film you've seen before, mainly because it's so damn bright. In fact, I'd venture to say that Midsommar is literally the whitest film of the summer, and that makes it even more unnerving.

Midsommar centers around Dani (Florence Pugh), a college student whose anxiety and trauma reach a fever pitch when her sister murders their parents and kills herself. Not helping Dani's grief is her boyfriend, Christian (Jack Reynor), who wasn't equipped to deal with Dani's mental health before this sudden tragedy, and has no clue what to do with her now that her entire family is dead. Still, Christian chooses to stay in the relationship, because adding a breakup to Dani's plate right now wouldn't be nice even if it might be for the best—but what he doesn't do is try to be a better person or a better boyfriend.

After Dani finds out that Christian has planned a trip to the Hårga commune in rural Sweden with three of his graduate school buddies to attend a midsummer festival, he invites her along—without telling his friends—thinking she won't want to go. He's trash.

But, Dani decides to go, and the group ventures to Sweden, where things get symbolically dark, but actually really bright, since the sun barely sets at that latitude during this time of year. It's really beautiful in the commune; everyone eats mushrooms and the scenery is an influencer's dream. The Swedes dance, sing, and dine together in verdant fields. They all wear flower crowns and all white caftans and gowns. Seriously, depending on the brightness levels of your local movie theater, sunglasses might do you well. Unfortunately, though, Hårga is less a commune and more a cult that has human sacrifice high on its list of priorities. So things might seem bright, but they're actually really, really dark.

And yet, this cinematic choice of lightness perverts all of your expectations about scary movies. There are no dark hallways or shadowy figures guiding you directly to a cheap jump scare. Black cloaks and crimson hoods don't signal sinister groupthink. The audaciousness of Midsommar's weird rituals and gore is that they happen in selfie-approved lighting, and often in front of smiling faces. This—in addition to the fact that the two-plus hour film moves at a snail's pace—renders viewers completely unprepared for the film's most frightening moments.

And, also: In case you thought I called Midsommar white as a nod to the racial or cultural background of most of its cast, you're not wrong. Let's be honest: I can't think of anywhere that would be whiter than this rural Swedish setting. Plus, it takes a certain kind of white privilege to even be able to book a trip to Sweden on a whim as a broke PhD student—to say nothing of the male privilege required to be like Mark (Will Poulter) and think that the only thing waiting for you once you arrive is attractive women who want to sleep with you. There's even more white privilege on display as Christian steals Josh's (William Jackson Harper)—the lone Black person in the whole movie—thesis idea and then throws him under the bus. In addition to Josh, Connie (Ellora Torchia) and Simon (Archie Madekwe) are the only other people of color in the film, and all three of them end up dead. Maybe this is why, by the end of Midsommar, I was pretty much rooting for everyone to die, and begging for the sun to set on this chaotic place.