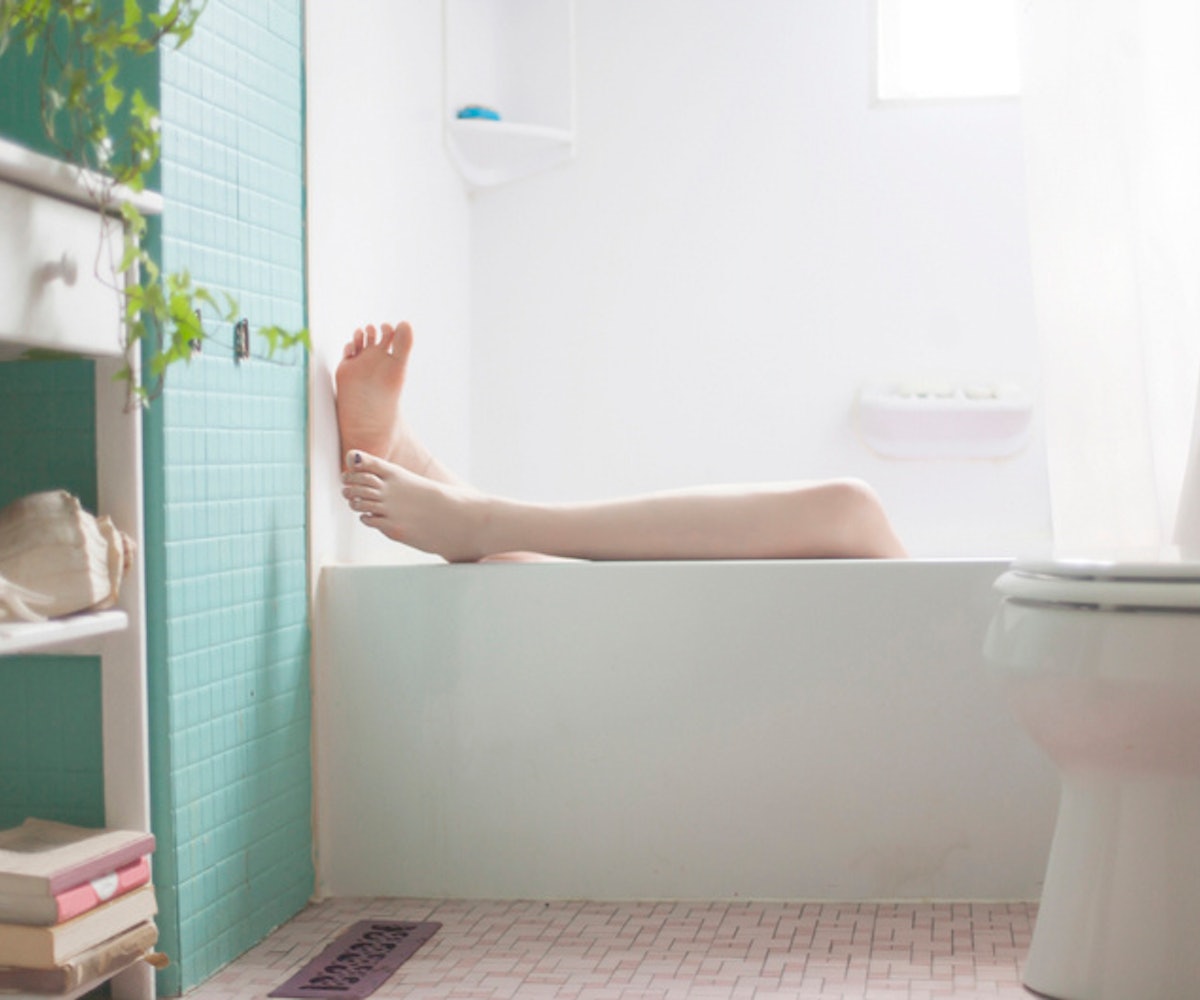 I suppose I have the New York Times to thank for the fact that the following words, arranged in precisely the following order, have been rattling around my head for the last few days: "For Tug Rice, an artist, the bath is a seasonal comfort." Those words were written toward the end of an article about the current, sky-rocketing popularity of baths, and they sent me to Google so that I could find out if Tug Rice—who is quoted in the article as being set on "Prioritizing self care in the new year!"—is real. (He is. His Instagram bio explains that he is a "wayward bachelor who dabbles in watercolor." So.)

But there are other reasons to be interested in this article, ones that have little to do with watercolor-dabblers. The Times has zeroed in on baths as a trend because baths sit right in the center of a Venn Diagram of a trio of millennial interests: Instagram-friendliness, self-care, and "gadget-free zones." Baths, Times writer Ruth La Ferla explains, are "retreats from the sensory overload of daily life," and are "a practice that, like yoga, white-noise immersion and maintaining a sugar-free diet, is an adjunct of so-called self-care." They are also, though this goes unmentioned in the article, really cheap—if not free. Which is almost definitely why so many millennials have actually started soaking in tubs until we're little more than wrinkly, pruned-up versions of ourselves. (Share to Instagram, 1.1K likes, 369 comments.)

If you happen to have a home with a usable bathtub (which is, of course, not always the case), a bath is one of the forms of relaxation that has the lowest barriers of entry. All a bath requires is that you fill up your tub and hop on in. And while, yes, you can spend money on bath accessories ranging from ever-popular bath bombs to wooden bathtub caddies to bath salts ranging from basic Epsom to goop (also basic, but in a different way), it is a far less expensive escape than, say, that other Instagram-friendly activity: going on a luxurious vacation.

And so baths abound and are written about as if they are the newest millennial obsession, as fleeting as any other aesthetically driven trend, like color-coordinating your books. And perhaps they are; perhaps there will be other millennial-beloved activity trending on Instagram soon enough, but I can promise you one thing, it will probably be something inexpensive, because the one thing all these millennial trends—including color-coordinating books and posting to Instagram itself—have in common is that they're cheap.

Every millennial trend piece, whether revolving around things that millennials love or things that they hate, has affordability as its unifying theme. Everything millennials have killed, from J. Crew to dating to drinking to going to movie theaters, died an ugly death because they were too expensive to be worthwhile. And all those things millennials have raised to prominence, from houseplants to skin-care products to crafting to baths, are, if not free, then at least relatively affordable and accessibly priced.

Of course, that doesn't mean that there aren't plenty of ways in which cheap hobbies and interests aren't being monetized by brands, and, in turn, by everyone from media companies to Instagram influencers, as a means of selling products. (All of which makes it impossible not to lament the uniquely uncomfortable fact that so many people seeking to profit from the self-care narrative invoke Audre Lorde while doing so, ever comfortable in their lack of self-awareness as to what Lorde meant when she wrote, "Caring for myself is not self-indulgence, it is self-preservation, and that is an act of political warfare.")

Despite brands' best efforts to get millennials to spend money in the manner of the generations before them, it isn't going as well as they'd like. That's why, as per a recent Vox article, credit card companies are making it more difficult to earn rewards. Writer Chavie Lieber explains, "Banks offer patrons a line of credit with the expectation that they'll make money off interest rates when bills aren't paid on time or in full," and the way that this works with rewards programs, is that banks assume that people will sign up to get rewards, utilize the credit lines, but fail to pay their balances in full. But as credit card users have started to "game the system," by, uh, paying off their balances, credit card companies have gotten upset at their diminishing margins and begun to punish users by rolling back perks. In other words, get ready to start hearing about how millennials are killing credit card companies any day now.

This doesn't mean, of course, that there won't still be the continued onslaught of attempts for people to profit from free activities, like bathing and, you know, sleep. That's capitalism's way, and it's something that it would be wildly disingenuous of me to pretend that I'm not a part of, since I work in media. And yet, it is possible to be ethical within the constraints of this system, I think (I hope), and one way to do that, or begin to do that, is to acknowledge that the system exists, that there's a reason that baths are trendy right now, and it isn't just because Tug Rice, an artist, gets seasonal comfort from lounging in his tub. It's also because baths don't cost anything, and you don't have to answer emails when you're in them, and they feel really nice when you're tired and burnt out and, no, a bath is not a form of political resistance, but that's okay, because it is a time to do nothing, feel nothing except the water on your body, and maybe read something, on paper, from a book you randomly selected from your color-coordinated bookshelf. What book? Who knows? Who can really find anything on those shelves anyway? Luckily, it doesn't matter. Everything is fine. Because you're in the bath. And it's free. Like all good things.