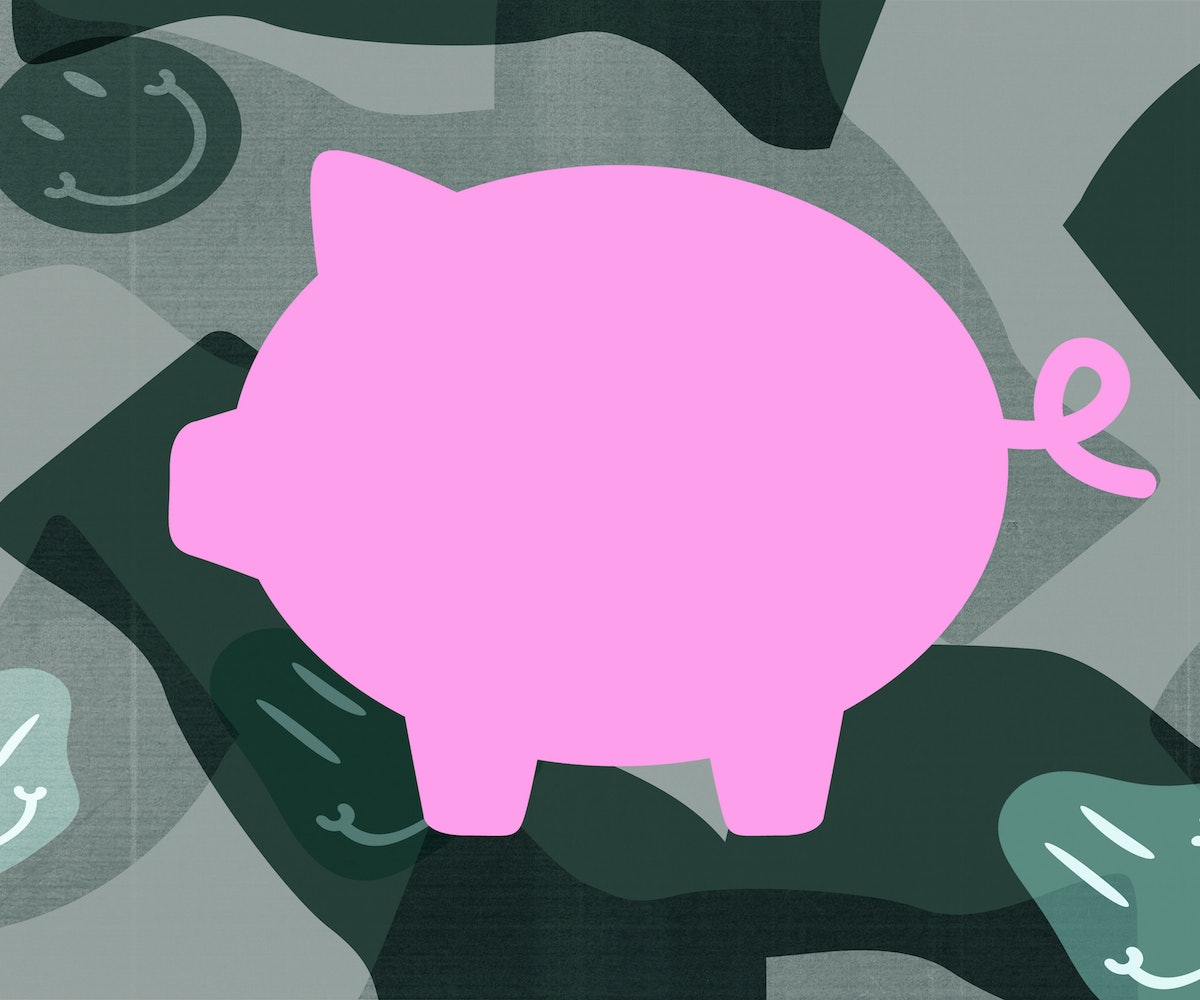 Ugh, money. It's such a taboo topic because basically everybody struggles with it—earning it, saving it, spending it. It's one of those things only discussed by way of complaining. Like, when it comes time to pay your bills, pay off your debt, or pay $15 for your sad desk salad. We think about money in terms of not having it, but there are some ways to make dealing with it, keeping it, and growing it a little easier. And the years leading up to your 30s are a great time to start thinking about how to do just that.

This isn't to say you shouldn't think about money earlier than your 30s, but we're going to use this time period as a framework because it's often the decade when people start to think most seriously about their future. As pop culture would have you believe, your 20s are when you're expected to play around and make bad decisions. This then gives you enough time to recover without completely screwing up the next couple of decades for yourself. By 30, the thinking is that you're going to have kids, buy a house, or maybe start a business down the line. And if that's what you're interested in, all of those things involve money. And money often involves compromise.

Now, as Priya Malani, co-founder of Stash Wealth, tells us, millennials don't exactly like the C-word. "We want our boozy brunch, our avocado toast, our rosé, our travel, our Uber, our SoulCycle," she outlines, repeating the keywords of just about every article about millennials ever. But, she stresses, "You can do all of that and still not fuck up all of your big financial priorities down the road." The sooner you get your money in order, the less you have to compromise.

Emily Lowry, author of Broke Millennial Takes On Investing, brings up another more positive C-word to keep in mind, which is control. "My general mantra when it comes to money is, you have two options, either you can control money or money controls you, and I think that 30 is really a great drop-dead date for anybody to feel like, Okay, this is it, I'm taking back control."

So, whether you're in your last year of your 20s or in the early stages (or even in your 30s, it's never too late to pivot to caring about your money), ahead are some essential money moves to make.

Get Serious About Your Student Loan Debt

Let's start with the annoying stuff first. The thing holding most millennials back from getting serious about money and about saving is dreaded student loan debt. If you can pay yours off by 30 (especially if you're only dealing with undergrad), then great! If not, as Lowry suggests, "you want to be in a position where you're able to start getting rid of them or have a very serious plan in place to get rid of them." At the very least, you should be paying attention to them along with the interest it's accruing because "a lot of the times we let financial things happen to us instead of taking back control."

Consolidating, on the other hand, means rolling all of your student loans into one payment rather than managing, say, five different ones. And if you can raise the amount you're paying each month, then definitely do that because that, too, can have a dramatic impact in the long run.

Either way, you should know your debt payoff date. Like, down to the month and the year. "It's so much more motivating than feeling like, 'I'm gonna be stuck making payments forever,' or 'Maybe if I ignore them, they'll go away,'" Malani says. "It's more psychological than anything."

Be Cognizant Of Your Credit Score

You don't need to check it every day or anything, but Malani says you should know what it is. Because, again, the decisions you're probably going to make in your 30s (buying a car, a house, moving into your own apartment, etc.) are all impacted by this three-digit number.

Gone are the days when you have to go through the tedious action of pulling your credit score, now there are apps for that. Malani's favorite is Capital One's CreditWise for a couple of reasons. One, it has built-in fraud protection and sends you a push notification if it suspects anything. Two, it has a credit score simulator which will tell you if closing a card will make your score go up or down. Which, by the way, Malani says you shouldn't stress out about. "It only takes a few months to rebuild your credit score, and I often see people overreacting to things like that," she says.

As for what your credit score should be, Malani says to aim high and try to get it above 750; Lowry says your goal by 30 should be to get it into the 700-plus range, "preferably 720 and up."

Speaking of credit scores, credit cards are also something you should be thinking seriously about. You need several in order to even build up a proper credit score, and Malani says the biggest money mistake she sees millennials making is not using theirs. "People are really proud to tell us this, but you're not hacking reward points, you're not building a credit score, you could be getting cash back, all of these cool features," she says. We get that the idea of borrowing money is scary, but Malani explains: "The reason using a credit card becomes a mistake is because we think of a credit card as free money, but instead you really should just think of a credit card as a smarter way to use the money you already have." She suggests using it as if it's a debit card that you pay off once a month in full.

Another thing: That card you probably got on your college campus 10 years ago shouldn't be the only one you own, either. Grow up. "Don't just stick with your basic credit card," Malani says. "You're definitely ready to upgrade, especially if your job is going well." Some of the ones she recommends for high earners are the Chase Sapphire Reserve or the Capital One Venture. But, ultimately, which one you buy is up to your needs and priorities. Another thing to remember is you don't have to get a credit card through your bank, and often there are much better options out there through different providers.

Have An Emergency Fund

Given how unreliable job security is these days (in short, no one's safe), it's essential to have an emergency savings fund. This is different from your 401K, which Malani stresses you shouldn't touch for any reason until you're ready to retire. A lot of the time people will tell you to have around six months worth of your salary saved, but Malani calls bullshit on that. "That is way too much money," she says. Three months worth of fixed expenses should be enough, "things that, if shit hit the fan, you couldn't turn off easily." Like, rent, utilities, groceries, medical insurance. Add up those things, multiply it by three, and that should be a savings target. "The point of an emergency fund is really to give you a cushion and a buffer to begin setting up access to other pools of money that you have available to you," Malani says. "It should be your first line of defense, not your only line of defense."

Which means you should have money stashed away elsewhere. So, once you have your emergency fund fully funded, start thinking about goal setting for the future. Lowry recommends having short (one to three years), medium (five to 10 years), and long-term (10 plus years) goals. Long-term might be something like retirement while short-term could be paying off credit card debt. Lowry says to make sure you don't forget about that middle bit though, which a lot of people tend to do. That could be anything from buying a house to saving up for a nice vacation.

Everyone's list will differ, the key is what comes after they're written down. "It's good to goal set, but, as soon as you do, I want you to also put an action plan behind that," Lowry says. "What are you doing to make those goals actionable, so that every single day, every single month, you're making small incremental steps to actually achieving them?"

One of those steps could be to start making more money. This is hard for a lot of reasons, but Lowry says a great aim could be that "by the time you're 30, you don't feel like you're just scraping by anymore with your income."

As for where you should be stashing those savings, Malani suggests foregoing brick-and-mortar banks and moving things to an online savings account. You'll get more bang for your buck that way. She explains: "Online banks work a little harder for you, and the reason they do that is because they have less overhead, they don't have real estate, they don't have bank branches, and they're not actually paying personnel to staff those branches, so they can afford to pay you a higher interest rate."

We're not talking about the savings account attached to your bank's checking account. This should be totally separate. "By keeping it online, it's under a different login, and so it's out of sight, out of mind, which means you're less likely to move your savings right back into your checking account to pay bills because that's what most people do," Malani says. Two of which she recommends, which both have high interest rates, are Ally and Marcus.

The first step of investing is figuring out what you're investing for, which is where the goal setting comes into play. Investing is great for the more medium or long- term goals, since it's a way for your money to grow over time, not overnight, as Malani says. Don't think of it as the Wall Street way of doing things—buying and selling stocks so you can double your money in a day—"that's called gambling," Malani says. "No one should tell you how you should be investing or what you should be invested in until they know what you're investing for."

Investing is an intimidating conversation, and Malani says it's wise not to just jump into it. "You really need a finance degree to figure out how to be investing," she says. "I truly don't believe anyone should have to figure out how to invest on their own." Instead, she suggests you use some of the more tech-savvy platforms out there, like Betterment or Wealthfront. "You tell them what you're investing for, and they'll tell you how you should be investing," Malani explains. "They decide the portfolio based on your goal and the time horizon of your goal."

NEXT UP
Culture
Marie Faustin Loves To Waste Men’s Time
Culture
Netflix Is Seriously Cracking Down On Sharing Passwords
Fashion
Jenna Ortega Is The Face Of Adidas’ Newest Line
Astrology
How to Use Astrology to Access Past Lives
Style + Culture, delivered straight to your inbox.