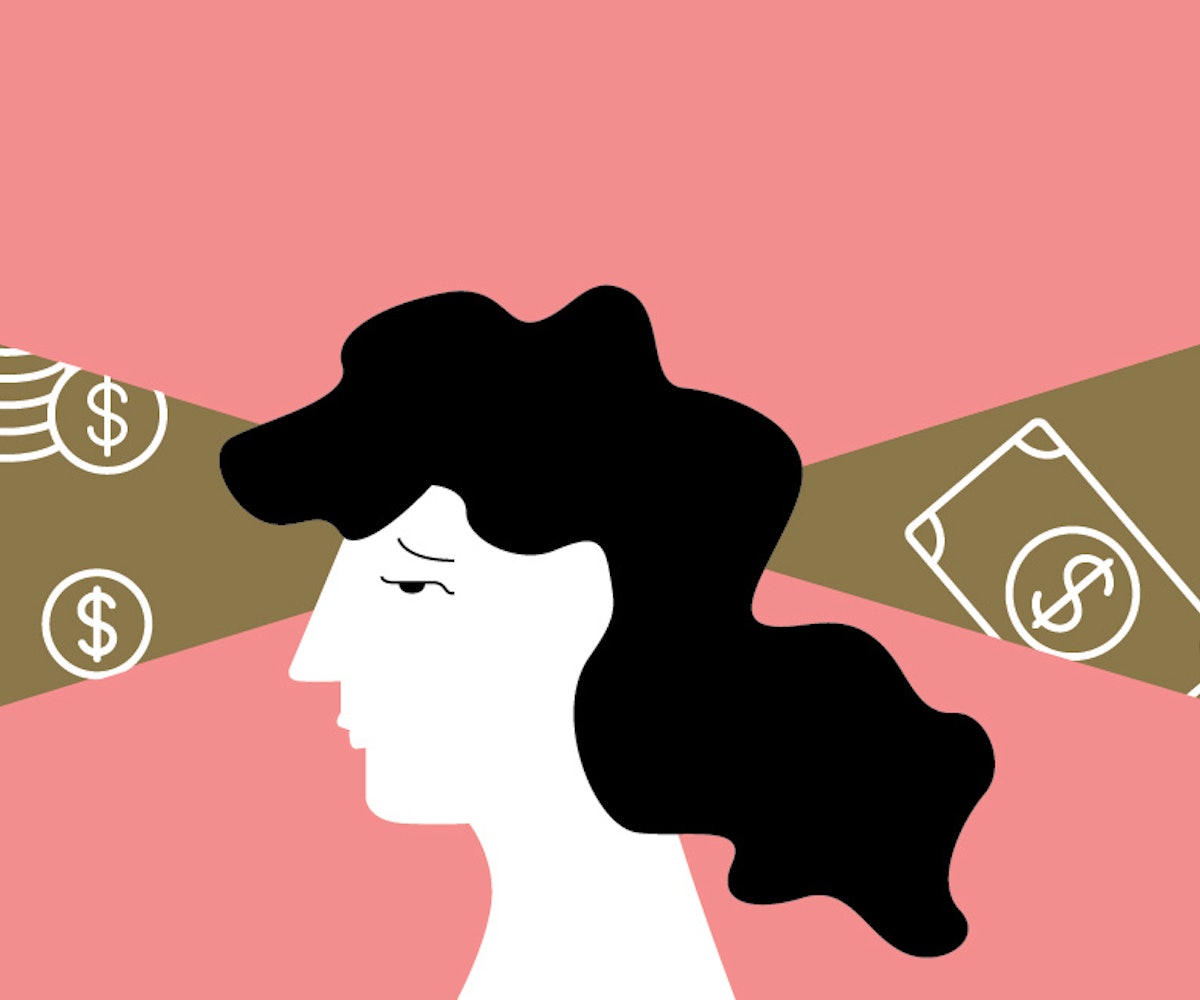 Financial issues are always extremely stressful—but add a mental illness to the mix, and you've got a swirling, noxious witch's brew of trouble. I know of what I speak: Money anxiety has had its claws wrapped around my neck for over a decade. When I was 16, my family fell on hard times, and we lost nearly everything. I was ripped out of my comfortable, privileged bubble and thrust into the real world—and I'm grateful for it, even if I now have perpetual money anxieties. Because it's not easy to erase a decade's worth of panic attacks about my family's—and subsequently, my own—financial issues.

Money has always been one of my biggest anxiety triggers—if I can barely handle going on a date without running into the night in a blackout panic, imagine how I grapple with other kinds of stressors. When I got laid off from a part-time gig a few months ago, I felt like I was thrown to the wolves—financially, but also mentally. I spiraled. And even though I've slowly gotten back on my feet since, I felt like I needed to talk to someone who could speak to the real and present intersections of money and mental illness.

Gaby Dunn is a longtime friend of mine—she's also a financial expert and host of the popular podcast, Bad with Money (and New York Times bestselling author of the book by the same title). She's written extensively about her money struggles and dissected millennial finances on her podcast, which is now in its fourth season. As a queer woman who's been diagnosed bipolar, Gaby's money and mental health paths often intersect, which is a common experience for people who suffer from mental illness. Plus, having mental health issues alone can be expensive, what with access to therapy and medication (or lack thereof—the medical industry is fucked, but that's another story!).

I spoke with Gaby about her experiences with money anxiety and what we can do to allay it when the odds are so stacked against us.

Do you experience anxiety about money?

Absolutely. It's my number one stressor. I cry about it constantly. I think all the time about how to get money and what to do with the money once I have it. I've yet to get any straight answers about what I should do because no one's situation is one size fits all. I started my podcast, Bad with Money, literally because I couldn't find any truthful or helpful information.

Based on your expertise and personal experience, what kind of people do you think experience money anxiety most? Is it marginalized people? People who already suffer from mental health issues?

I've never been rich, so I can't speak to that, but in my experience, worrying about money made me physically ill. The stress gave me nosebleeds at one point. But I think everyone experiences money anxiety. Even wealthy people always want to be wealthier or wonder about what would happen if they suddenly weren't wealthy. (For more on this, read Rachel Sherman's article "What The Rich Won't Tell You"). But unfortunately, we live in a capitalist society, and you need money to live, so it does tend to touch every part of a person's life, and when there's not enough of it, it can be physically and mentally debilitating, which in turn makes it harder to go out and fix the problem. A lot of the worrying is a cycle.

Absolutely. We did an episode about mental health, and there's an entire mental health chapter in my book. I have bipolar II and depression and anxiety, and so money absolutely contributes to all of those. Bipolar manic spending is real.

How does your mental health or mental illness influence your money habits or money anxiety?

It influences it a lot. There's bipolar spending which is just the mania of "I NEED THIS RIGHT NOW!" because I've randomly decided I'm moving to Japan or I need to learn the oboe. Then there's depressive spending which is like, "Who cares? I suck and the world is ending so let me buy 15 pairs of sneakers." And then the result of that is coming out of it and being lucid and having massive anxiety about what I did during those periods.

You said that you started your podcast because of these kinds of issues. Have you dealt with anxiety over money for a long time?

Yep! Money makes me cry. It scares me deep in my heart. It makes my stomach drop. In my house growing up, it was very feast or famine, so I had money whiplash, and waiting for the other shoe to drop made me constantly anxious. I used to write in my diary about clocking my parents' spending and being nervous about it when I was, like, 12.

Ahh, me too. Well, 16. And it's totally carried over into my adult life, because I've never been totally financially stable. Now that you are more solvent, do you experience less jitters over this kind of thing?

Nope. Same level of jitters! I think things are better now, but when something comes up, I shrink back to who I was in 2012 and basically still cry. I do feel more aware and educated and like I am standing a bit higher on the stairs, but no, in my experience, the anxiety is always simmering. I think if you've ever been worried about money (and some people just aren't because of how they grew up), you'll always worry.

Some people who suffer from mental illness can't afford the treatment they need, which makes the anxiety even worse—a vicious circle. Have you experienced this? What have you learned about the intersection of mental health and the financial aspects of the medical industry?

Absolutely, but I went to therapy on a sliding scale, which is available. I don't even know! I really don't know if there's a solution to this. Mental health treatment costs way too much. An intake appointment for a psychiatrist can be $400 to $700. It's wild.

What advice would you offer to relieve such anxiety? As in, does not spending help?

I have a compulsion where I sell things. I read this book called Your Money or Your Life, by Vicki Robin. In it, she talks about how in a pinch, there's always unseen assets around you. Meaning, if you live in a house, there's something in it you can sell. No matter how much money I ever make, I promise I'll probably still be pawning shit on the weekends. Having cash in hand assuages the anxiety.

Bad with Money is available for purchase. You can stream Gaby's podcast here.