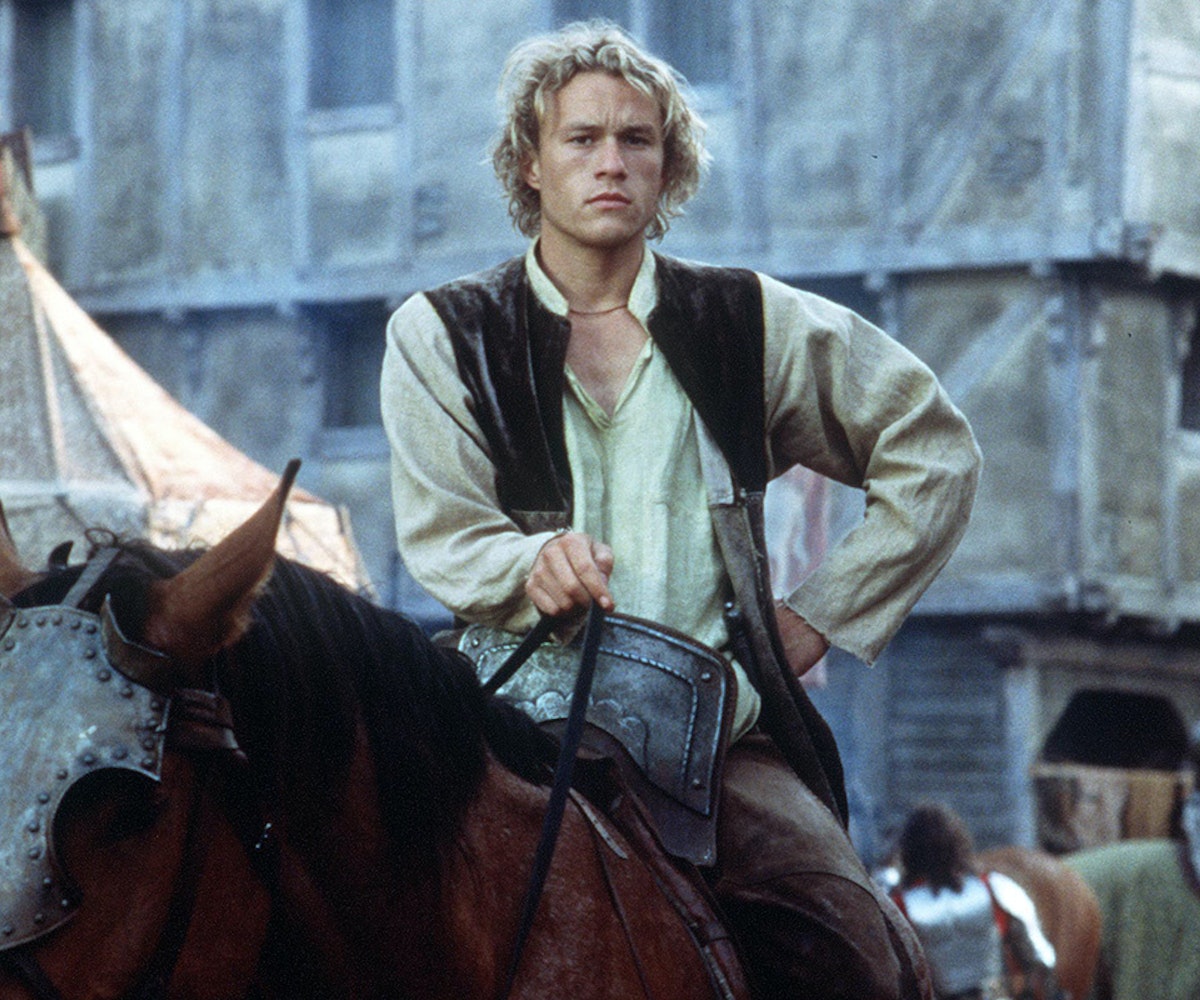 Heath Ledger was a childhood chess champion. An avid one. Some say he wasn't very good, others say that he was obsessed; that he owned a lyrical imagination behind the veneer of a relatively ordinary young kid.

When I found this tidbit out, soon after he died, my sense of extreme loss deepened; it was one I hadn't experienced before. This acute sadness of his accidental death played into the feeling that we had inexplicably lost a person so dynamic, that his absence would rupture something deep in our collective cultural psyche.

I wasn't wrong. Over the years, mourning Heath has become a preferred party conversation starter where I've oft-lamented the feeling of losing him (like he'd ever been mine to lose) across many moments in time. Fervently, I've articulated to friends, acquaintances, and even strangers, speaking of his intense ability to transform in ways that had affected so many people—ones of such differing backgrounds!

But, my passion makes sense. Heath was the calibre of actor that we currently seem to lack in the Hollywood zeitgeist. He had a charm of disregarding the paradigms of celebrity, and was, instead, an unironic artiste—a baby Daniel Day-Lewis. In fact, when DDL won a Screen Actors Guild Award in 2008 for There Will Be Blood, he dedicated it to Heath, stating he had long been inspired by him. "For as long as I can remember, the thing that gave me a sense of wonderment and renewal ... has always been the work of other actors. Heath Ledger gave that to me," said Day-Lewis, with melancholic repose. It felt wonderful to witness, sad as it was, such a man of prestigious talent humbled by another's art.

People like powerful artists, especially ones we've lost to tragedy. That's why we revere those we've lost too young. Every Kurt Cobain and Amy Winehouse, we are anguished over what could have been, longing for the art that was also lost by their untimely deaths. We also love an artist that's a renegade, someone relatively removed from the polite-society-machinations, who instead speaks to, and for, themselves. We imagine them to be powerful outliers, romanticizing their social stances.

I felt that way about Heath, particularly because watching him grow, rebel, and make illustrious, thrilling work helped nurture my own desires to be an artist, a person of great interest and stimulation. By being exactly who he was, Heath taught me about being myself. It sounds abstract, but that's also the reality of being young. We crave to be seen, and when we think our heroes see us, that visibility matters, no matter how unexpected its form.

Heath was born in Perth, Western Australia, on April 4, 1979. He was said to be a lively and vivacious kid, who knew he wanted to act at a young age. I was raised in Sydney, Australia, throughout the '90s and early 2000s. Heath and I grew up together, then, but separate; in two different parallels on a continent the size of Canada. Australia sprawls in erratic ways, and its geographical temperament is a wild one that both of us housed within ourselves.

Australia's land is dense. There's a sonic, psychic shift that resonates in patterns that aren't perceptible to the human eye but are, instead, mirrored in the country's vast flora and fauna. It's in the rolling waves of the ocean and sea dripping the coastlines with mosaic blues, the way the sting of the eucalyptus firs invoke a sun salutation from your nose hairs as soon as you station yourself outside. To me, there's also a strangeness that many of us possess, because of this frequency, a Picnic at Hanging Rock-type strangeness, an inquisitiveness that dares us to see the entire world, and strive to gain access to it. I've always thought this might be because we are so isolated, the largest island in the world, or maybe because some parts of our vast nation are largely uninhabitable by anyone other than Aboriginal folks. It makes the land unfettered, the pulse of the land stronger. I have a theory this is what makes Australians unique. There's an insanity to us that's garnered from the land.

Even from a young age, I was attracted to everything that felt the opposite of me, challenging my interiority. I was a young Muslim kid rarely allowed out, so I lived my life through movies and books. I constantly lied about this, though, telling my friends that I was forever busy, or that something had come up last-minute, because I knew my mother's answer; no, was the word of my upbringing. I was a child of cascading violence from a codependent, borderline, bipolar mother. So, I desperately needed to stretch free, and films (and sometimes their stars) became my compass. What kind of person was I? I looked to people on the screens to answer this, and as a way to see myself reflected.

I first heard of Heath when I saw him on the Australian TV series, Sweat, where he played a gay cyclist with a complexity I found riveting. As a young queer teen, I felt weirdly validated. In one episode, Heath's character, Snowy, was told by his friend, "You're a one off!" It was a slur, suggesting Snowy was a scammer because he was a gay that "acted straight"; but Snowy retaliated, calmly but with a bite: "I'm not a one off, Danny. There's lots of us!" After seeing that, I was so dumbfoundedly happy, thinking, There were more of us, I wasn't alone. And so my love for Heath began.

It deepened when I saw him in the Australian classic, Two Hands, also starring a young cherub-faced Rose Byrne. It was about the streets of Kings Cross, in Sydney, and the gang violence that existed in the seedy underbelly of the crime world. Think: Jane Campion's Top of the Lake: China Girl, but with the grungier aesthetic of the '90s. Growing up in the relative safety of the suburbs, I longed to understand the world around me, the one I had no access to. I craved to go beyond my confined parameters, and there was something riveting about Heath's tendency to play characters against the grain. Ones that were gritty, and flawed—and yet, romantic. His depiction of Patrick Verona, the punk foreign exchange student who falls in love with Katrina Stratford (Julia Stiles) in 10 Things I Hate About You, was another role that proved how boring it was to be normal, or conventionally popular. I looked to Heath as comrade of strangeness. I understood myself by learning the ways this steampunk blond preferred to be more gangly than hunk. Despite his laissez-faire appearance, that of a true blue surfer, Heath wasn't afraid to look ugly, and to self interrogate that ugliness. He could play the outsider, because he was one.

His depiction of our most famous Australian outlaw in Ned Kelly had me thrilled in my early teens. And the famous line from Kelly himself: "Such is life" (which were apparently his last words as he was shot by the police) reverberated my entire being. He was our Robin Hood folk hero, and Heath made us proud in his weighted portrayal. By the time 2004 rolled over, I had scrawled "Such is life" on all the surfaces I had access to—my own skin, insides of paperbacks, my diary cover, my diary interiors, even a Vaseline lid. It revitalized me to see the underdog win, and that was always Heath's effect, he made you want to root for him.

I was in New York when I found out Heath had died. I hadn't moved to New York yet but was doing an internship at the United Nations. One morning, I was sipping a rare (back then) flat white in SoHo, wasting time on my old white plastic MacBook, waiting to go to work when I scrolled through the feed of my Myspace homepage. A Korean skater-turned-comic I had a crush on had posted a photo of Heath as the iconic Joker (an iconic still that had circulated before the release of The Dark Knight, an eerie capturing of a harsh reality) with the caption, "I still can't believe it, man." I looked at the photo, lipstick smeared, slits for a grin and a comical sneer of atrocious proportions, and instantly knew something was wrong.

It was 2008, how did I use Google back then? I remember typing in his name in the search bar and the inevitable flood of reports saying he had died. I sat stunned, then I cried. It felt surreal. I had grown up with Heath, in so many ways he had been a compass. What was I to do now? How could I fill this void? "Why so serious?" soon became a tagline of heartbreak.

There's a scene in Candy (2006) where, in withdrawal from his heroin addiction, his character, Dan, pants and heaves with such a guttural wrench that when I first watched it, at 16, freshly in a circling addiction of my own self-hate, I felt seen. The world is monstrous, I knew, but there was something truly radical in watching another examine the human condition—first by being able to comprehend it, then portray it with such resilience and compassion.

There's a Clarice Lispector quote that reminds me of this ability of Heath's: "Why not abandon ourselves to the torment, why not open the floodgates and put our whole mechanism into action." Heath made me believe in the power of art through his capturing of it. He made room for the boundaries of storytelling to be pushed to the farthest of reaches, to ensure we expected more of art, but also of artists.

I think of him walking the streets of Melbourne (I was in Sydney, doing the same) marching with the over one million people protesting the Iraq War in 2003. I think of the peace signs he'd sometimes wear at the Oscars, or otherwise anxious at award shows. I think of his irreverence with the media, hating to be watched, pulling his middle finger up at the paparazzi alongside Michelle Williams, both in their bathing suits. I think of him as a photographer and director, and a person unafraid to scour the limits of artistic heights. I think of him sitting somewhere dancing on the rooftops akin to the scene in A Knight's Tale where he and Shannyn Sossamon (my childhood crush) waltz around to "Golden Years" by David Bowie. Though, really, when I mourn Heath, I think of him somewhere overlooking a gleaming sea, shouting "Checkmate!" as he enthusiastically wins another game, before starting his next.