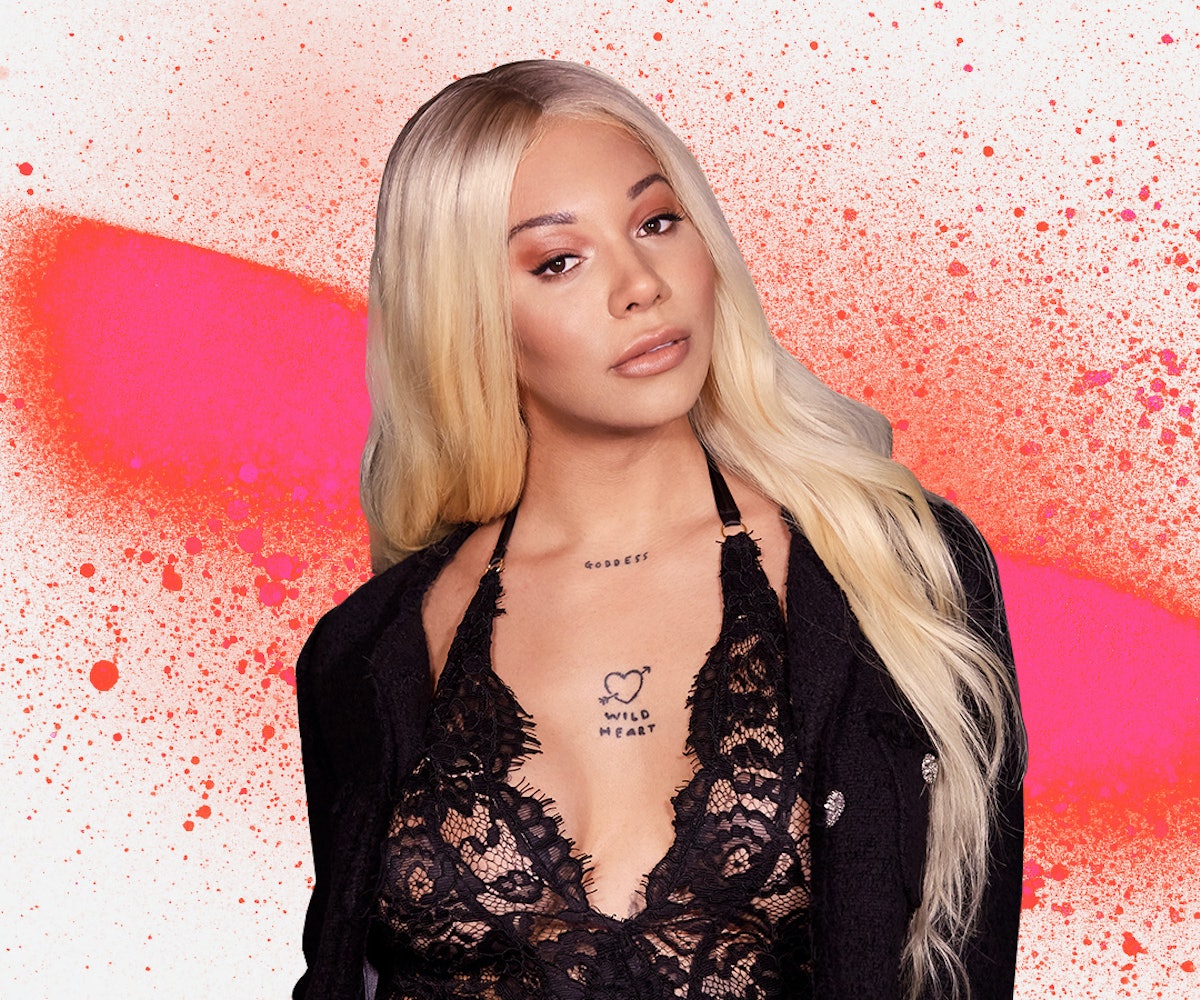 It took Munroe Bergdorf a long time to actually love herself for who she was, she told me, because the world she grew up in was devoid of representation of confident and happy, queer, Black, trans people. And because of that, she spent a long time trying to mold herself into something that she wasn't, which is what Bergdorf is fighting against now—because no one should have to go through that.

In January, Bergdorf was announced as lingerie company Bluebella's newest spokesperson for its #LoveYourself campaign, and its message is incredibly close to her heart. We're so inundated with lingerie campaigns (all clothing campaigns, actually) featuring women with the same types of bodies—and while, yes, they're beautiful, Bergdorf says, they're not the only type of woman who is beautiful. In order for other women to feel accepted and confident in themselves, their bodies need to be given the same love.

Bergdorf's consistent message, both in her everyday life and in this campaign, is one championing diversity and inclusivity, and working against bigotry. Since she's been in the public eye, she has come out against the Victoria's Secret CMO Ed Razek's transphobic and fatphobic idea of "fantasy" and called out stylists who don't know how to dress bodies that aren't a sample size. She's fighting for diversity to be more than just a trend, and be the norm instead, so that queer, trans, or Black kids don't have to grow up with the same identity shame as she did.

With the Bluebella #LoveYourself campaign, Bergdorf wants to show those kids that it's possible to be gay, or trans, or Black, or all three, and still be confident and full of self-love. There isn't enough of that, and she wants to change it. Below, I chatted with Bergdorf about her new campaign, how she sees her transition as an act of self-love, and why it's important to see confident women of all kinds in the media we consume.

This campaign is all about loving yourself and being completely confident in yourself. What would you tell someone who is not yet so sure of themselves?

Take the body positivity movement with a pinch of salt sometimes. I think there's so much pressure to love yourself wholly, but it is a process. And loving yourself is the ultimate goal—it doesn't have to be something immediate. So, I think it's all about finding that calmness and going on the journey of self-love rather than feeling pressure to love yourself immediately. So, I think that loving yourself is a way of life rather than a destination.

For sure. The body positivity movement isn't always positive.

It can be quite toxic sometimes. And, you know, telling somebody who struggled with their body image for their entire life to love themselves straight away is not realistic. But, I think loving yourself, and treating yourself with love, and looking at yourself in a loving way, is a more realistic way to go about things rather than, I love absolutely everything [about myself]. I'm still... there are parts of me that I'm just like, Oh my god! I'm having laser on my face again because I have hormone imbalances, and I don't love the fact that my skin is really unpredictable at the moment. But, it's all about recognizing that I am not my skin, I am more than that, and having bad skin on the occasional day is a drop in the ocean.

What led you to become aligned with this campaign? Why is it important for you to speak on the idea of self-love?

For me, I think it's a really important message because I haven't always loved myself. I've struggled with eating disorders, gender dysphoria, gender dysmorphia, body dysmorphia, and depression—and it all stems from not feeling like I fit into society, or that I have to fit into society. So, I think that it's really important for me to be involved with this campaign, especially as I've got quite a large following of younger trans people. I want to set an example to them and show them that you may be struggling now, but that's not necessarily how it's always going to be. So, a message like #LoveYourself is important to me, especially because transitioning is an act of self-love. You don't transition because you hate yourself—you hate how you feel because of society.

How did you get to this point where you love yourself?

I can say honestly that I do love myself. But who loves this? Who loves not fitting into your wardrobe when you've got nothing that fits? There are parts of yourself that you may not love, but ultimately it's about looking past the things that spark your insecurity and realizing you're more than that, and knowing that those things don't define you. A zit doesn't define me. A fluctuation in weight doesn't define me. It's been a long journey to get to where I'm at, but I think it's important to take the emphasis off of the small things and realize that I am living a life in a way that is with love for myself in the bigger picture.

Moving onto the notion of femininity in the campaign. What does femininity mean to you, personally?

Femininity has no set shape, and femininity is different for absolutely everybody. Femininity can change from person to person, and it can change within that person from one given moment to another. So, for me, since I see myself as a femme, it's my source of power. It's what I tap into to feel empowered. For so long, before I transitioned, I saw it as like a weakness because society sees femininity as subservient to masculinity. We encourage boys to be masculine, but we don't necessarily have a problem if girls are tomboys. If a boy is a tom-girl, though, then that's an issue. So, I now see femininity as my superpower.

To go off that, why is it important for multiple meanings of femininity to be shown in the media?

I think because for so long, femininity has been seen as a product for men, and as a performative idea—and really, femininity doesn't need to be for anybody apart from the person who exudes it. So, I think that it's really important to also recognize that people may not feel 100 percent feminine all the time—we've all got feminine and masculine parts to our personality, and just because you may identify as a femme doesn't mean that you want to wear floral dresses all the time, or wear lingerie all the time. It doesn't take one form. I think it's really important that everyone feels included in aspirational imagery that goes into diversity as well. The more examples that we show of people expressing themselves in feminine or masculine ways, the more people feel validated and included in the bigger picture.

How does lingerie tie into this idea of self-love for you?

For me, lingerie is a fun way to celebrate your body. You don't wear it and not want to wear it—you wear it because you want to. And I think it's important that we get away from the idea of the male gaze, and to take lingerie away from that as well, because it's beautiful. I think lingerie is an art form, and a brand like Bluebella which is created by women, I think that's so important as well. This lingerie is literally designed with women's bodies in mind by women, and that's such an empowering thing for me. So to be involved in a campaign that has women's best interests in mind, rather than it being for the benefit of men, is really progressive in my eyes.

What makes you feel best about yourself? Most confident?

Confidence is something you have to work at all the time. My confidence is something that I'm working at constantly, rather than connecting to clothes or connecting to makeup. At the beginning of my transition, I connected my confidence to my makeup, and then I realized that when I took the makeup off, and I was around people, my confidence instantly went. So confidence is always about embracing yourself at your most raw moments—no makeup, no clothes, no wig, no heels—just embracing you, as you are, and everything is an added bonus. But, I think you need to keep your environment in mind at all times, and not put yourself in situations that compromise your integrity or self-worth.

What do you hope that people in the fashion and beauty industries learn from you and this campaign?

I hope that they start to wonder, Who made up the rules? Why is the fashion and beauty industry so set to conforming to ideals of beauty that really only oppress the people that are buying the products anyway? I mean, the average woman doesn't look like Jasmine Tookes or Candy Swanepoel or Bella Hadid. I mean, they are absolutely beautiful, but if we are only presented with one idea of what a woman looks like, then the majority of women who look a certain way—maybe more curvy, or a different skin tone, or a different gender identity—those women are being left behind. Beauty can come in a curvy and Black image as well. Disabled women can be beautiful as well. Intersex people have absolutely no visibility whatsoever, and they're beautiful. Trans women are beautiful, too. So I just think it's all about variety, and throwing the rule book out the window, because it's tired and boring.

To put it lightly.

Yeah. And, diversity doesn't need to be a boring thing that you need to do. You should be excited about including all shapes and sizes and races and genders and gender identities. Because we can learn so much from each other. I don't want to see the same kind of woman all the time, and I'm sure that those women don't want to, either. I mean, they're absolutely stunning, but that's not the be-all and end-all of womanhood.

Who else do you hope this message reaches?

I often think about myself as an 11-year old, and what I would have liked to have heard when I was that age. I spent so long trying to conform to what I thought was beautiful which I had absolutely no hope of achieving—and I didn't need to achieve it either. Now, I wear what I want when I want to wear it. And I dress how I want to dress because of how I feel. And I gravitate to what I feel inspired by or interested in rather than what I feel I need to do. So, I just hope that I reach that 11-year old in their bedroom reading Vogue. I'm in all these magazines, and that there was absolutely nobody like me when I was younger. So I hope that I make them feel less alone, and inspired to be their best self.