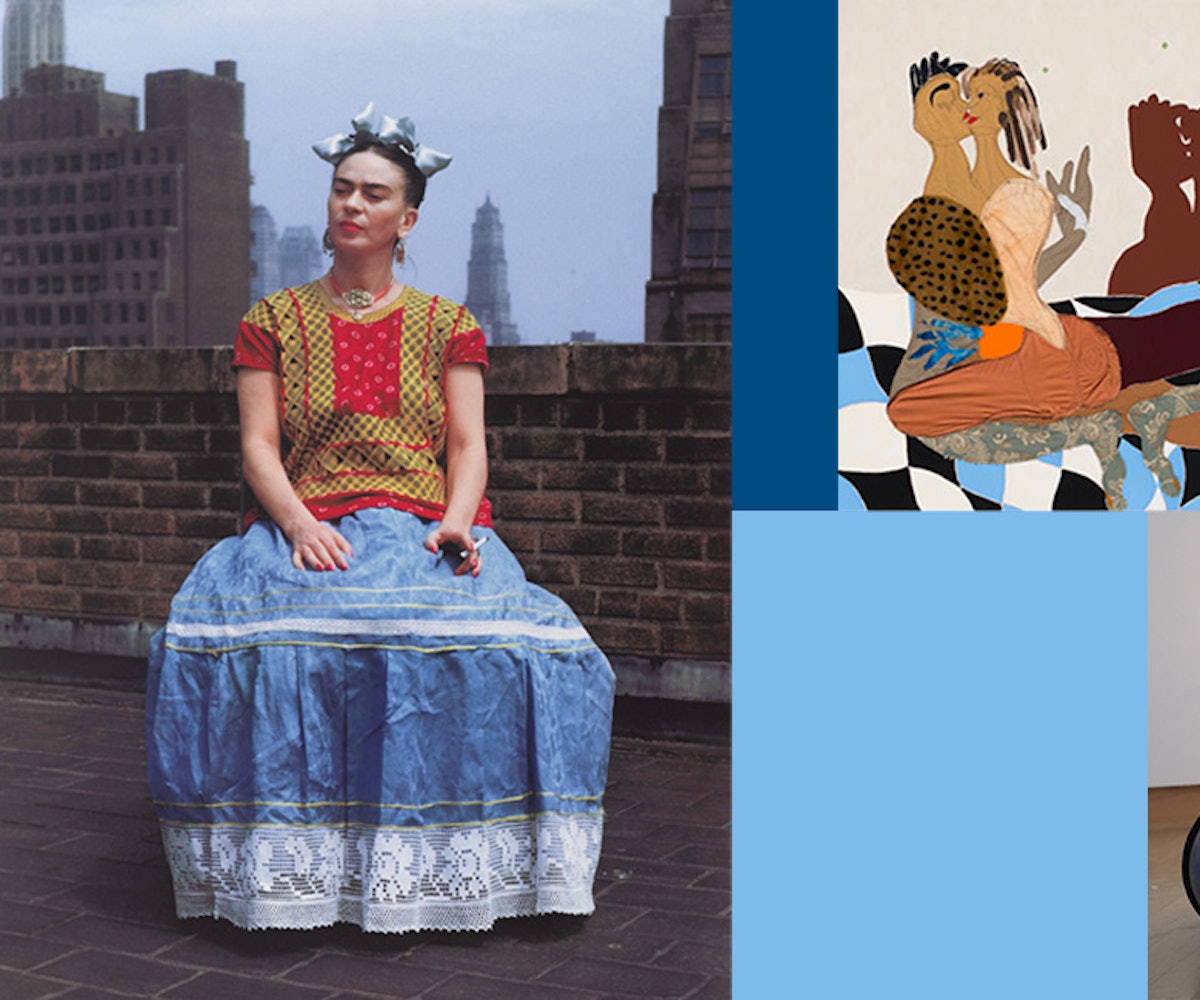 This winter, museums and galleries all over the country are staging shows by artists who offer a global and inclusive perspective on the issues facing our society today. See the listings, below, and mark your calendars so that you can see as many as possible.

New Museum, Jeffrey Gibson: The Anthropophagic Effect, on view from February 13 through June 9

New Museum, Nari Ward: We The People, on view from February 13 through May 26

Ward's work repurposes objects found in the streets of Harlem, where he lives, and Jamaica, where he was born. This exhibition is a retrospective of his 25 years of work, which is often political with a focus on racism and power imbalance.

Brooklyn Museum, Frida Kahlo: Appearances Can Be Deceiving, on view from February 8 through May 12

This is the largest U.S. exhibit in a decade to celebrate revolutionary artist Frida Kahlo and will be the first in the country to show a collection of her clothing and personal items, which were rediscovered in 2004.

The Cleveland Museum of Art, Beyond Truth: Photography after the Shutter, on view from February 10 through May 26

A picture doesn't necessarily tell the truth, which we're all too aware of nowadays, with the uncomfortable prevalence of Photoshopping and FaceTuning people's faces and bodies (particularly those of women). Beyond Truth offers a historical understanding of the fact that photography doesn't always accurately document the world.

Museum of Contemporary Art Chicago, Prisoner of Love, on view from January 26 through October 27

Artist and filmmaker Arthur Jafa created a seven-minute film about the black experience in the U.S. Through footage showing figures like Martin Luther King, Jr., Barack Obama, and Beyoncé interspliced with home videos and footage of the news and sports games, the video "tells a story of trauma and transcendence."

This exhibit argues the idea that the monsters in surrealist art were, at least in part, a reaction to wars, the "monstrosities in the real world."

Painter Nina Chanel Abney will create a mural which addresses the way we see and deal with social issues now that we are reliant on digital media. Her piece will bring attention to "the constant stream of true and false information, the dilemma of liberal racism, and abuses of power that lead to structural inequality."

Fountain Street, 11:11–The Depth of Perception, on view from January 2 through January 27

Dozens of artists were asked to examine the introspective act of taking notice, defined as "a single moment in time that encourages reflection and to focus one's attention on the present."

Museum of Fine Arts Boston, Graciela Iturbide's Mexico, on view from January 19 through May 12

Iturbide is hailed as one of Mexico's most influential working photographers; she meticulously documents every aspect of her country, from its many indigenous communities and cultures to its various religions and rituals. This is her country through her own eyes.

Zeitgeist, Trump Papers, on view from January 5 through February 23

Artist Ward Schumaker's exhibit showcases "a collection of quotes by or about Trump and his administration," and, unsurprisingly, none of them paint the president in a positive light.

High Museum, Way Out There: The Art of Southern Backroads, on view from March 2 through May 19

Not everyone has readily available access to artist mentorship and art classes. Way Out There celebrates the self-taught artists who paved their own way in the industry.

Atlanta Contemporary, 2019 Atlanta Biennial, on view from January 17 through April 7

The Atlanta Contemporary's Biennial will celebrate contemporary artists throughout the region of the Southeast, particularly calling on artists who contextualize the "complexities and deep vernacular traditions" of their hometowns.

ICA Miami, Judy Chicago: A Reckoning, on view through April 21

This one may have already opened, but it's worth checking out before it closes this spring. Chicago reimagines skills which are either stereotypically female or male and, in the process, makes it blatantly obvious that our gender norms are completely ridiculous and problematic. Which we already knew, but it's always nice to see further proof.

Brache has created a hyperrealistic model of the front yard of her childhood home, replete with porcelain shrines to the maternal figures in her life which evoke Santero statues seen in front lawns all over Miami. Her exhibit questions where the private spaces become public, particularly for women.

Women are too often forced to make themselves two-dimensional to make room for men. This exhibit gives eight women artists the ability to re-format the space that they occupy to challenge the "patriarchal and colonial histories" that still impact our lives.

The Visual Arts Center, Elia Alba: The Supper Club, on view from January 25 through February 22

Alba's collection of portraits are a result of a series of intimate dinners that she has hosted with artists, art historians, critics, and curators, where everyone is asked to come to the table to discuss critical social issues.

This exhibit calls attention to the connection between systems of power and the hierarchies we experience in our everyday lives. Zulu Time is named after the world's standardized mode for time-telling, which was based on latitude and longitude and "literally revolves around Western norms for structuring a day."

Women and their Work, Hedwige Jacobs: If I could, I would cover everything with my drawings, on view from January 19 through February 28

Sometimes, all art needs is someone to look and take it all in. Jacobs' exhibit invites you to do just that: simply take it in.

James Harris Gallery, In Tandem: Works by Fay Jones and Robert C. Jones, on view from January 9 through February 23

Robert and Faye Jones are partners in real life, and this exhibit shows us how their work over their years together speaks to and is informed by each other.

White's maximalist pieces are a celebration of millennials' self-love and our (ever-curated) lives, right down to our trash.

Frye Art Museum, Tschabalala Self, on view from January 26 through April 28

Self's work plays off of the stereotypes about black people that pervade in our society, but the materials used in each piece show that there's a layered, complex understanding to be seen about black identity.

Portland Art Museum, The Map is Not the Territory, on view from February 9 through May 5

This is Portland Art Museum's reformat of the biennial, which will explore "our connections to the land, efforts toward decolonization, bringing indigenous values to the forefront, and a celebration of the region's kinship."

Museum of Contemporary Art Denver, Amanda Wachob: Tattoo This, on view from February 14 through May 19

Wachob is known for pioneering the watercolor tattooing technique, a permanent splash of watercolor on the body of the tattooed. She also uses a tattoo gun to create works on canvas, paper, silk, fruit, and leather.

Museum of Contemporary Art Denver, Aftereffect: Georgia O'Keeffe and Contemporary Painting, on view from February 14 through May 26

The artists in this exhibition are all brought together because their work resonates with the work of Georgia O'Keeffe. That's quite the compliment.

Sanders' work, pictured above, attempts to show its audience a recognizable yet vague subject, seen in this exhibition through paintings of the female form.

Silver Eye, Gothic Fictions, on view from January 31 through March 23

Gothic Fictions traces our current obsession with true crime and horror all the way back to the Gothic period and the works of gothic storytellers like Edgar Allan Poe.

Armbruster's work documents the connection between memory and location, arguing that, just like our memories impact how we see the world around us, "external environmental energies" can impact us.

This exhibit focuses on the ways in which colonialism and slavery still impact our culture today, because, even though slavery no longer exists, its repercussions still definitely do.

San Fransisco Camerawork, In Transit, on view from January 24 through March 15

In Transit documents the lives of immigrants and displaced peoples in the Middle East and Europe to give "testimony to the struggle of day-to-day survival and the search to find a sense of normalcy and stability." Our administration could learn from this humanizing collection of photographs and video.

The Contemporary Jewish Museum, Show Me as I Want to Be Seen, on view from February 7 through July 7

When we view our identities as fluid and ever-changing, it can be hard to settle on which version of yourself you'd like to see immortalized in a portrait. This exhibit explores representation in art within the context of this fluidity.

Shulamit Nazarian, Trenton Doyle Hancock: An Ingenue's Hues and How to Use Cutty Black Shoes, on view from January 5 through February 17

Hancock's work stems from his own created universe, called The Moundverse, which is inspired by comics, Greek mythology, and his past as a black adolescent living in Paris, Texas.

Millett uses pretty much any type of medium to tell her stories of identity, collective history, and her own memories. She's particularly focused on representing black aesthetics and examining African-American histories.